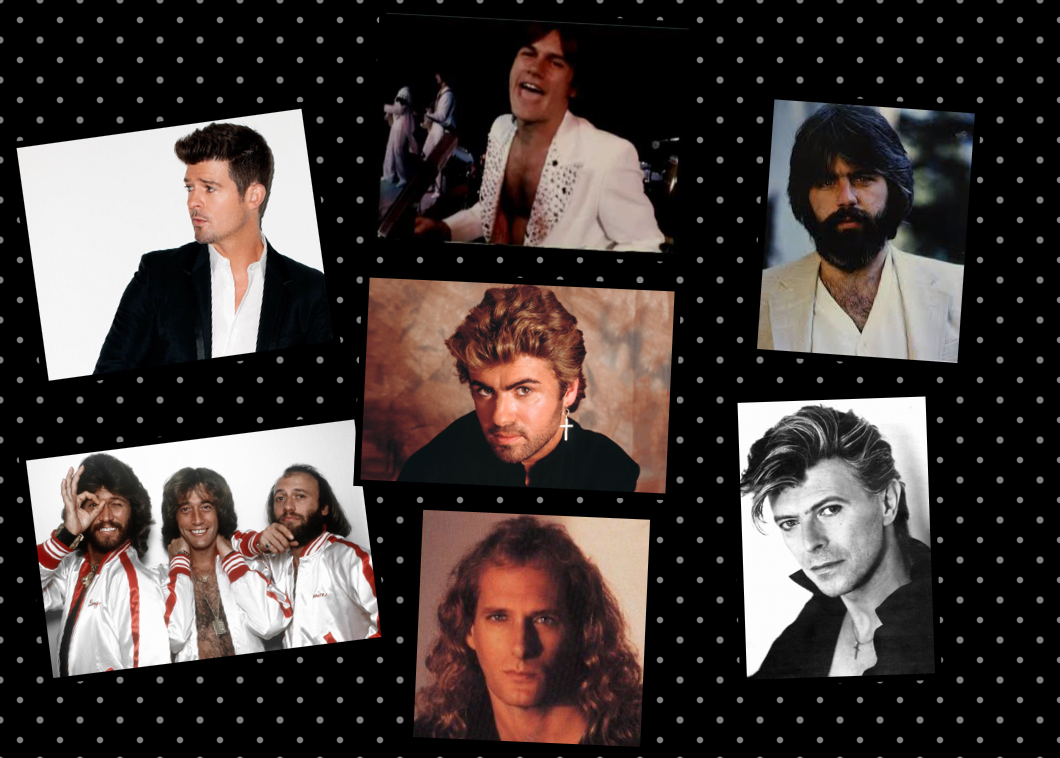 Last week, I presented a special countdown of the 16 Greatest Blue-Eyed Soul Singers – the Women.  It came on the heels of the recent 2015 Billboard Music Awards naming white Australian female rapper Iggy Azalea as Top Rap Artist, an accomplishment that caused a bit of a stir, to say the least, in the rap and hip-hop communities.  For this week’s article – as promised – I focus on the fellas and give you the 30 male acts that I believe are the best blue-eyed soul singers of the past six decades – 1955 -2015.

The number on the guys’ list is increased to 30 in recognition of the sheer number of white male singers and bands that have wowed music fans with their brand of soul and R&B-flavored music for as long as I can remember.

This article includes several special adds, like links to YouTube clips of “Soul Train” performances by several of the musicians and, of course, my playlist of songs by all the featured artists.

As a refresher, the term “blue-eyed soul” originated in the 1960s to describe white artists who performed music in the style of black artists on the Motown and Stax record labels.  It was controversial in its original use during the racially tense 1960s and could be considered so even today, especially as the hard lines between pop, rock and R&B (and even country to a lesser extent) have been blurred somewhat during the past 25 years.

However, as we head into African-American Music Appreciation Month (June), I thought I’d revive the term to create a list of white women and men who over the past sixty years have best exemplified the music that originated it.

It’s worth noting that, for this week’s list of male artists, there are far more duos/groups than there were on the ladies’ rankings, and not only because the list grew from 16 to 30.  On the ladies’ chart, there were no duos or groups – only solo singers.  However, duos and groups account for 11 of the 30 acts on the guys’ tally, including six in the top ten.

There’s another thing about this collection of musicians that’s worth noting.  Some bands on the list, like KC & the Sunshine Band, Simply Red, Average White Band and the Doobie Brothers, had mixed-race membership at various points during the height of their popularity.  However, all of those were fronted by white leaders who served not only as the voice of each act, but also the creative forces behind their biggest hits, which makes them blue-eyed soul contenders.

Additionally, this countdown is just as notable for a name you won’t see as it is for the artists who are listed.  The King of Rock & Roll, Elvis Presley, is omitted from this list despite having more success on the R&B charts than any other white artist in history.

Why did I leave him out?  It’s simply that between 1956 and 1963 at the height of Elvis’ popularity, the Billboard R&B charts (the main source of data supporting this list) were not as discerning about distinguishing true R&B from rock and roll as they later became.

As a result, many white rock and roll acts like Elvis, Bill Haley and others routinely trolled the R&B charts and regularly ranked high on them.  This occurred even when those artists had only loosely interpreted the blues and soul sound to create a brand of music that was more accessible to rock and pop fans than it was to R&B/soul listeners.

So similar were Billboard’s R&B and pop charts at the time that the publication eventually discontinued the R&B list from late 1963 to early 1965.  It fortunately amounted to only a brief hiatus and when the chart was reinstated, Billboard began chronicling music that truly represented what R&B fans were listening to and buying.

There were, however, some blue-eyed soul singers who chose to create a more legitimate R&B sound.  An example was singer Len Barry, who’s “1-2-3” from 1965 is a pop and soul classic.  Unfortunately for the song’s writers, it was also the subject of litigation in which Motown Records claimed that the song was a reworking of a Supremes song penned by legendary writers Holland-Dozier-Holland the year before.

The claim was ultimately settled and Motown’s hit-making trio have since been listed as co-writers.  It thus became one of the earliest cases of artists allegedly plagiarizing other artists’ songs for their own gain, only to have to pay dearly in the end (see Robin Thicke and “Blurred Lines”).

Len Barry just missed making this list, but he certainly deserves honorable mention for daring to step outside the box and create music with a true soul sound while his rock and roll counterparts were less true to R&B to make their music more appealing to the mainstream.

Now getting back to the list, I’ve excluded artists who only made one-time forays into R&B and soul.  A classic example is rocker Rod Stewart whose disco hit “Da Ya Think I’m Sexy” made the R&B top ten in 1979.  However, most of his other tunes were anything but R&B or soul.

Similarly, Cat Stevens, who was primarily known for his folk/rock tunes in the early-1970s, recorded “Was Dog A Doughnut” – a funky electronic instrumental track in 1978.  As funky as the song was, it doesn’t propel Cat Stevens (now known as Yusef) to this list of 30.  The late country artist Eddie Rabbitt even dabbled in soul with his 1979 hit, “Suspicions.”  But that won’t make him a blue-eyed soul artist.

Elton John, however, gets a pass because a good number of his songs skated the thin line between soul and pop (e.g., “Bennie & the Jets,” “Philadelphia Freedom,” “Mama Can’t Buy You Love” and others).

Other notable musical acts that were eligible but just missed the cut are Blood Sweat & Tears and Steely Dan (both more rock/pop/jazz than soul), Wild Cherry (one-hit wonders), Herb Alpert and Kenny G (both mostly instrumentalists).

Like the ladies’ list last week, I’m excluding rap because…well, this is a singer’s ranking.  I’ll do a special rap countdown another time.

Without any further delay, here they are:  “The 30 Greatest Blue-Eyed Soul Singers – The Men,” counted down from #30 to #1 – and beginning with a tie in the anchor position…

Most notable work: "Woman, Woman," "Young Girl" and "Lady Willpower." This band out of Washington State (named for the city of Union Gap) specialized in power ballads and scored a host of top ten pop hits in the late 1960s. Ironically, it was a soul classic by Otis Redding (("Sittin' On) The Dock of the Bay) that prevented their biggest hit, "Young Girl," from hitting #1 when it stalled in the runner-up position in 1968.

Oh, and you can hear all these artists and the notable songs I’ve mentioned in the special DJRob playlist available on Spotify, by clicking here.