Skip to content
Featured Artists GOAT Album Anniversary Series I Can’t Believe That Song (or Album) Is 40! In Memoriam... My Lists Pop Stuff R&B Music Commentary Trivia You Can Use Uncategorized 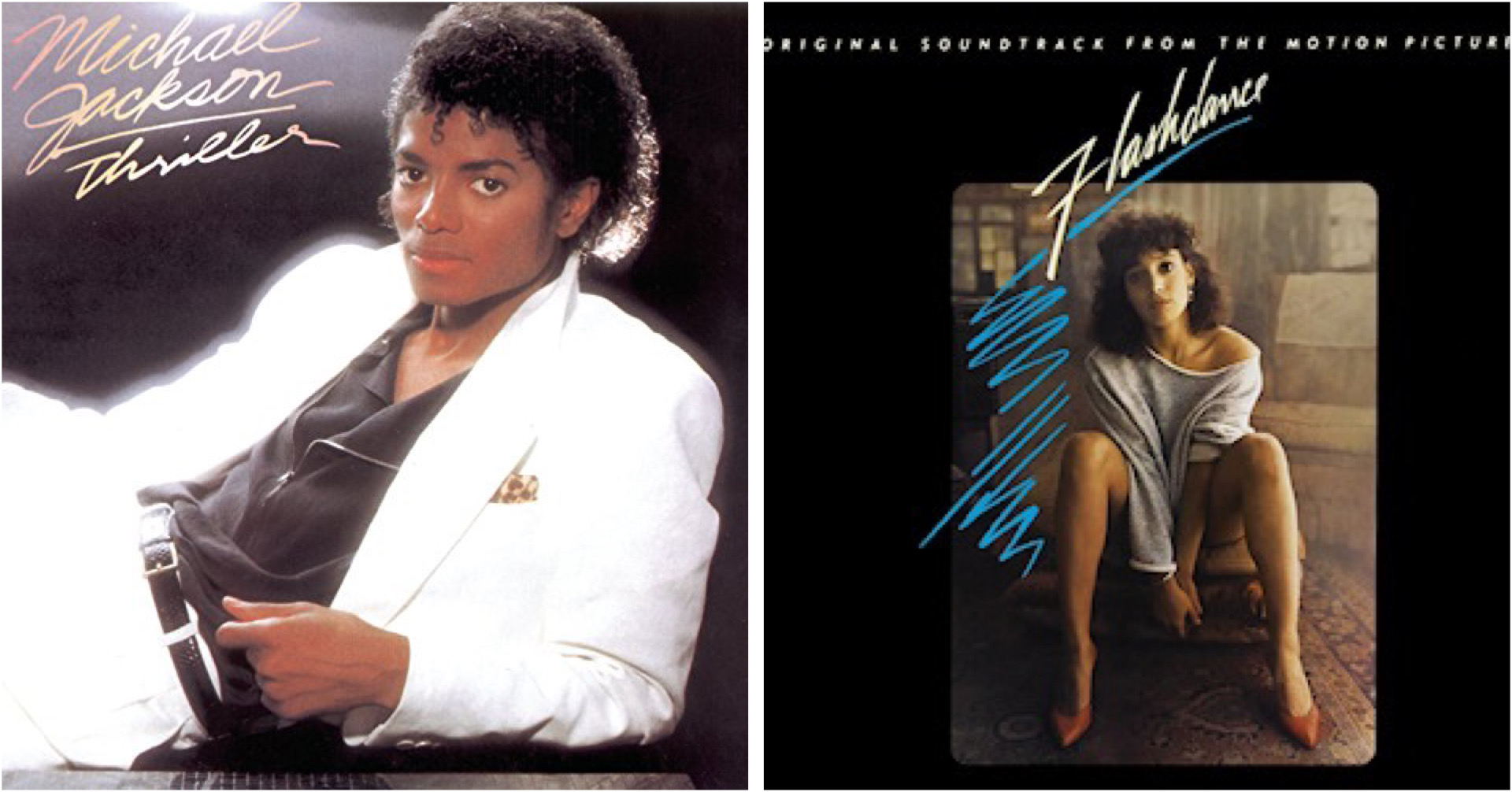 (November 30, 2022).  As everyone who follows the news—or at least this blog—knows by now, Wednesday (Nov. 30) is the official 40th anniversary of the original release of the landmark album Thriller by Michael Jackson.

As djrobblog has covered in various tributes, including this exclusive 40-facts-for-40-years homage earlier in November, Thriller was released on November 30, 1982–a Tuesday that year—and it changed the course of popular music forever, becoming the best-selling album of all time and returning Black dance-pop to the top of the charts.

One of the immediate beneficiaries of Thriller’s success was the dance-oriented soundtrack to the 1983 movie Flashdance, which was originally released in April 1983–just after Thriller first reached No. 1 on the album chart and while its two biggest hits, “Billie Jean” and “Beat It,” were concurrently riding the top ten on the singles list.

Leading the charge for Flashdance and its soundtrack was the first of two No. 1 singles released from it, the titular “Flashdance…What A Feeling,” sung by proven singer Irene Cara, who—like Michael at the time—was 24 years old and was primed to help bring dance-pop out of its doldrums and back to the mainstream after a significant backlash against such music in disco’s three-year wake.

As it would turn out, both albums were wildly successful and would remain on the charts for well over a year (Thriller well over two years in its initial run), as they spawned several multi-format hits that broke down color lines and sparked a dance music renaissance that took that genre to levels it hadn’t seen in four years.

But what’s more uncanny are the incredible ties that bind Thriller and Flashdance, both then and now, which inspired this writer to explore them further and document them right here at djrobblog.

Here’s a rundown of the events that forever tie Flashdance to Thriller, beginning with their epic battle at the top of the album charts in the spring and summer of 1983:

When the Flashdance soundtrack album catapulted to No. 2 on the Billboard 200 chart in May 1983, the only album stopping it from reaching the top was Thriller, which was in its 14th week at No. 1.

Four weeks later, on the chart dated June 25, Flashdance overtook Thriller, knocking Michael’s epic album to No. 2 and making the soundtrack the first of three albums that would unseat Thriller during its on-and-off-again chart domination (the other two being Police’s Synchronicity later that year and the Footloose soundtrack in 1984).

Thriller would return the favor two weeks later by rebounding to No. 1 and knocking Flashdance to the runner-up position.  The two would spend seven consecutive weeks dominating the top-2 positions during that period.

As a testimony to its phenomenal staying power, which included 16 weeks in the top 20, “…What A Feeling” shared top-20 space concurrently with four of the singles from Thriller: “Billie Jean,” “Beat It,” “Wanna Be Startin’ Somethin’,” and “Human Nature.”  Of the hundreds of songs that charted that year, Cara’s hit is the only one that holds that distinction.

In the second week that the Flashdance album was at No. 1, its second single, “Maniac” by Michael Sembello, entered the top 40 of the Billboard Hot 100 chart at No. 39.  With Cara’s “…What A Feeling” still at No. 1, this placement made Flashdance and Thriller the only two albums that week to have two singles simultaneously listed in the top 40.

Jackson’s two hits that week were “Wanna Be Startin’ Somethin’” (at No. 9) and “Beat It” (at No. 16).  Nine plus sixteen is 25, a figure that plays heavily into the numerology of this connection, which we’ll get back to in a moment.

When “Maniac” ascended to No. 1 that September, it became the second single from the Flashdance soundtrack to top the pop chart.  Ultimately it made Thriller and Flashdance the only albums in 1983 to generate two No. 1s apiece.

When all was said and done, Jackson’s “Billie Jean” wound up being the No. 2 hit of 1983 (behind The Police’s “Every Breath You Take”), while Cara’s “Flashdance…What A Feeling” ranked No. 3.

Exactly a year after Flashdance first displaced Thriller from the top (June 25, 1983), Michael’s landmark album would spend its last week in the top ten (chart dated June 30, 1984, which encompassed June 25).  The last week of June plays into several milestones associated with Michael Jackson, not all of which are pleasant.

Exactly 25 years after Thriller first fell from the No. 1 spot (and 24 years after it exited the top ten for what we thought was the last time), Michael Jackson died unexpectedly…on June 25, 2009.

On the occasion of the 40th anniversary of the release of Thriller, Sony Music released on November 18, 2022 a commemorative anniversary edition of the album, which contained the original LP’s nine songs plus various outtakes, demos, remixes and other Thriller-era songs that didn’t make the album’s final cut.

Exactly one week after the release of Thriller 40–on November 25–“Flashdance…What A Feeling” singer Irene Cara died unexpectedly.

On the very next chart, announced November 27th and dated December 3, 2022–exactly three days before and three days after the album’s anniversary, respectively, Thriller returned to the top ten on the Billboard album chart for the first time since June 30, 1984.

The memorial service for Irene Cara is still pending.

While her passing has naturally resulted in a surge in streaming and downloads of her hits, including “…What A Feeling,” it is unclear at press time whether that increase will result in a return of the Flashdance soundtrack to the top 10.

But wouldn’t that be something?  The Flashdance soundtrack following the Thriller album in the top ten again…almost 40 years later?

Uncanny indeed, and in this case an unfortunate set of circumstances if it were to happen.

Useless pop trivia enthusiast and lover of irony DJRob (he/him/his) is a freelance music blogger from somewhere on in the East Coast who covers R&B, hip-hop, pop and rock genres – plus lots of music news and current stuff!  You can follow him on Twitter at @djrobblog.