Eminem album at No. 3, but a quirk keeps his No. 1 streak alive; Hip-hop albums experience longest No. 1 drought in FIVE years! 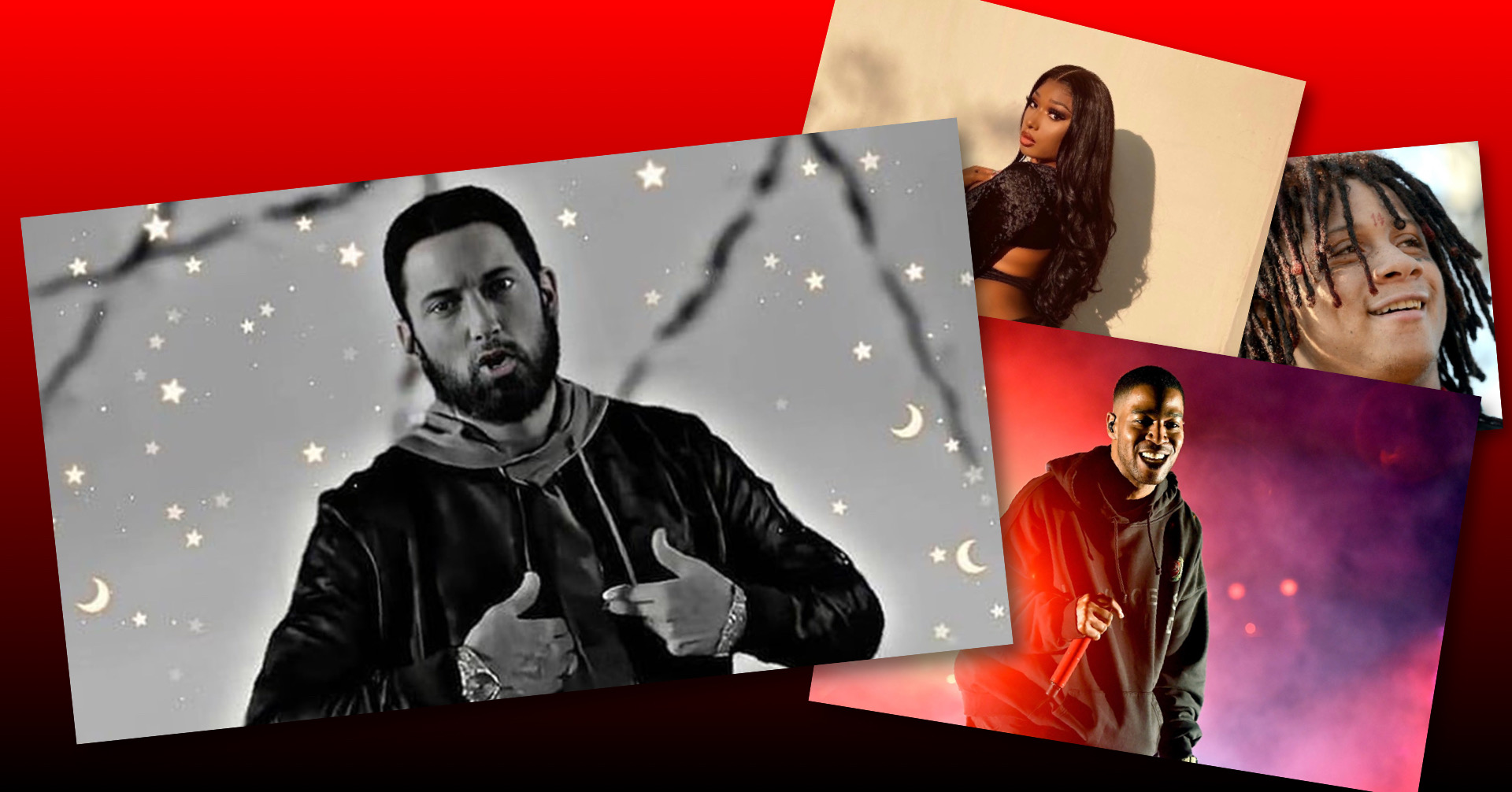 (December 27, 2020).  The year 2020 hasn’t yet ended, but hip-hop music will likely top all other genres in consumption percentage for the fourth year in a row when the final numbers are released in the next few weeks.

But even great year-end figures won’t conceal the fact that there may be a chink in hip-hop’s armor as indicated by the latest weekly Billboard 200 album tally.

Let’s start with the obvious.

The deluxe version of Eminem’s latest album – his twelfth overall – moves 199-3 on the chart, by virtue of a combined ranking with the original version of Music To Be Murdered By. Of note: all but one of his 12 albums have charted, with the last ten of them reaching No. 1. Only his first album, 1996’s Infinite, missed the chart altogether back when no one knew who Shady was.

The newly enhanced album, Music To Be Murdered By – Side B (Deluxe), is tracked for charting purposes with the original, which was released earlier in 2020 and was his most recent No. 1 album back in February.

The first Music To Be Murdered By sold more than 267,000 album equivalent units in its debut week back in late January (prompting its February debut at the top), while the current Side B (Deluxe) composite project sells roughly 94,000 units in the tracking week that ended at midnight Christmas morning.

That’s a significant drop-off for any new set of Eminem songs, whether paired with older tracks or not. But with Billboard tracking the new entry as a combined package with the older version, Eminem avoids the fate of having his No. 1 streak end with the new No. 3 ranking (it also saves Em some face with that infamous Lil Pump diss earlier this week essentially calling Shady washed up after early dismal sales reports).

If Billboard had counted Murdered By – Side B (Deluxe) as its own separate entry, it would have been Em’s first album to miss the top position since his second set, The Slim Shady LP, which peaked at No. 2 in 1999.  Every Eminem album since then has reached No. 1.

That’s a span of 19 years and eight months between his first No. 1 – The Marshall Mathers LP – in June 2000 and the most recent – Music To Be Murdered By in February.

Only one hip-hop act has a longer stretch of No. 1 albums: A Tribe Called Quest.  But their span of 20 years, three months and two weeks only encompasses two No. 1s: their first – Beats, Rhymes & Life – in August 1996, and their second – We Got It From Here…Thank You 4 Your Service – in December 2016 (after the group’s Phife Dawg passed away earlier that year).

Here’s the running tally of rap artists with the longest span of No. 1 albums on the Billboard 200 chart:

With Eminem’s No. 1 streak still active (despite the current Murdered incarnation’s No. 3 ranking) he still maintains just a slight lead over the next two contenders on the all-time list of rappers with the most No. 1 albums.  Here are the current standings on that tally:

And at 48 years and two months of age, by stopping at No. 3 this week, Em is also prevented from overtaking Jay as the oldest rapper to top the album chart.  Hova was 47 years and seven months when his 4:44 hit No. 1 in July 2017.  Em remains second in that category at 47 years and four months (his age when the original Murdered topped the chart last February).

But it’s Eminem’s age that may also be a key factor in why this 16-track deluxe version of the Alfred Hitchcock-inspired album didn’t do so well.

The Detroit legend, who’ll be 50 before this past year’s top rapper – Roddy Ricch – even turns 25, spends much of the new album making tired dick references and either worshipping allies (Dr. Dre, who is featured on the album), or reigniting beefs with fellow old rappers like Snoop Dogg (who isn’t included).

Even the Snoop diss is a timid one that lacks the bite of a trademark Eminem barb: “And diplomatic as I’m tryin’ to be, last thing I need is Snoop doggin’ me. Man, Dogg, you was like a damn god to me. Meh, not really (haha). I had dog backwards,” he raps on one of its tracks, “Zeus.”  Perhaps, the lob was a half-diss, half-concession?

Anyhow, Eminem also weakly retreads his perennial beef with easy target Machine Gun Kelly, the rapper-turned-alternative rocker whose last album abandoned hip-hop altogether (he claims Em ruined his hip-hop career) and, in a who’s-got-the-last-laugh type of moment, Kelly reached No. 1 this past October.

Coincidentally, October also happens to be the last time that any hip-hop album reached No. 1.  That was when 21 Savage and Metro Boomin debuted at the top (and displaced Kelly’s album) with their collabo Savage Mode II, followed immediately by a return visit to No. 1 for the late Pop Smoke’s huge bestseller Shoot for the Moon, Aim for the Stars, which spent its most recent No. 1 week at the top of the October 24 list.

That last datapoint tees up the second notable streak this article covers.

The ten weeks that have passed since the last hip-hop album ranked No. 1 is the longest such gap in FIVE years.  You would have to go all the way back to the period between October 17, 2015, and February 27, 2016, to find a longer gap between No. 1 hip-hop albums on the Billboard 200 chart.

That was when Fetty Wap’s (yes, Fetty Wap…that’s how long ago this was) self-titled début album topped the Oct. 17, 2015 survey, and Future’s Evol crowned the February 27, 2016 list, with no other hip-hop No. 1 albums in between…covering a span of 19 weeks between those two albums’ No. 1 placements.

The current ten-week drought is still far short of that and it hasn’t been for lack of rappers trying.  Several high-profile hip-hop albums have debuted and peaked short of the top in the past few months (note: the blog isn’t counting Bad Bunny’s recent No. 1 album as hip-hop, as it is more reggaeton/alternative rock in nature).

I’ve already mentioned Eminem’s Murdered By – Side B (Deluxe), and just last week Kid Cudi’s Man On The Moon III: The Chosen had to settle for a No. 2 peak behind Taylor Swift’s evermore album (which this week holds its No. 1 position from last week’s chart).

Earlier in December, Megan Thee Stallion had to settle for a No. 2 peak behind K-pop sensations BTS with her Good News album, and rap superstars Future and Lil Uzi Vert were sent packing after debuting at No. 2 with their collabo Pluto x Baby Pluto behind AC/DC’s first No. 1 in more than a decade, Power Up.

See where this is heading?

In mid-November, while Ariana Grande was topping the chart with her Positions LP, hip-hop upstarts like Australian rapper The Kid LAROI and the late King Von both made brief charges in the top five at Nos. 3 and 5, respectively, but to no avail.  Even NAV, a rapper with two previous No. 1 albums under his belt (including one earlier in 2020), had to settle for a No. 6 début/peak that week.

In the week prior, as Positions made its debut at No. 1, rapper/singer Trippie Redd was held at bay with the No. 2 début of his album Pegasus.  And the week before that, veteran rapper Ty Dolla $ign had a chance with his album Featuring Ty Dolla $ign, but it was held at bay by the ascents of albums from country singer Luke Combs and heritage rocker Bruce Springsteen.

That’s a whole bunch of hip-hop albums that easily could have – and in some cases, should have – made No. 1 on the Billboard charts in the past couple of months.

Except they did not, and we find ourselves in the midst of the longest drought for hip-hop at the top of the Billboard 200 list in half a decade.

But none of this should be cause for serious concern for hip-hop fans.  The reigning king of genres will surely bounce back in 2021 with a slew of new No. 1 albums to reestablish its chart supremacy.

As early as next week we could see the drought end with the Christmas-Day release by Playboi Carti (Whole Lotta Red), although he might have to overcome the avalanche of negative reviews and recommended track skips his album received from social media.

Eminem’s stans on the other hand?

Welp, they could take solace in the fact that his latest project is a “B-Side” collection, which usually means the tracks were considered by the artist to be inferior in quality to the tracks that made up the “A-side.”

That means Em (and his legion of fans) could dismiss Murdered (Deluxe) as a throwaway album of outtakes from his earlier recording sessions to explain its poorer showing. (Hip-hop sleuths will be quick to point out, however, that several of Murdered – Side B’s tracks – including the Snoop diss and those that make Covid-19 references – had to be recorded after the original album, like several months later, making the “outtakes” argument kinda lame.)

In another era, even an Eminem throwaway album would have posted better numbers than those of Murdered By – Side B (Deluxe), especially one released eleven months after the album it supports.  And it certainly would have been able to top the numbers of the two albums it succumbed to on the charts this week.

Those would be the folksy latest album by pop queen Taylor Swift (169,000 album equivalent units in its second week of release), itself a companion album to one she released just six months earlier; and the critically acclaimed new LP by 78-year pop icon Paul McCartney, whose McCartney III is also a continuation of albums he released 40 and 50 years ago (it registered 107,000 album equivalent units during the tracking week).

The better news for Em and his Stans is that Shady has had three No. 1 albums in just the past three years – more than most artists of any genre (only BTS and Taylor Swift have had more in that span) – and he’s still a music force with which to be reckoned.

So don’t count Eminem all the way out just yet!

One thought on “Eminem album at No. 3, but a quirk keeps his No. 1 streak alive; Hip-hop albums experience longest No. 1 drought in FIVE years!”