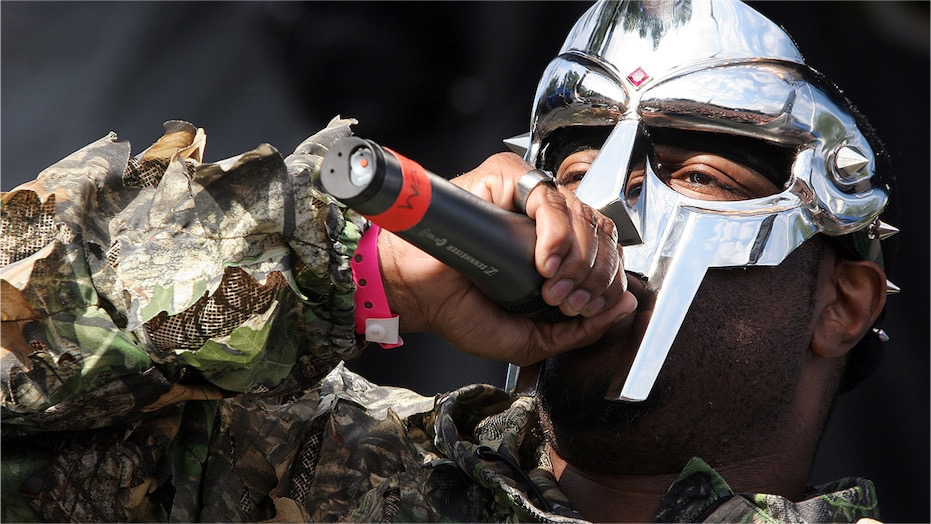 (January 2, 2020).  As this is a blog site that mostly covers musicians who thrive on commercial success and topping the Billboard charts, the late MF DOOM, born Daniel Dumile in London nearly 50 years ago, largely existed outside of djrobblog’s radar.

DOOM, whose 50th birthday would have been next Saturday, Jan. 9, died on October 31, 2020, a full two months before his passing was announced publicly by his widow on New Year’s Eve.

That a well-known rapper who rarely made appearances without his metal, comic-inspired, full-face mask died on Halloween is uncanny.  That we didn’t learn of his death until the last possible moment of a year in which mask-wearing became a political lightning rod, as well as a potential lifesaver, is almost poetic.

In an era where one’s Wikipedia page is often updated within seconds of the announcement of that person’s death with past-tense verbs and lifeline mileposts, how odd is it that DOOM’s entry showed him being with us for a full two months after death.

It’s the kind of stuff screenwriters trip over themselves while trying to come up with dramatic subplots for celebrity biopics.  It’s the type of footnotes to one’s lifeline that trivia buffs relish, as non-trivial as they may be in reality.

Equally as poetic (and non-trivial) was DOOM’s true underground status as both hip-hop artist and producer.

It’s no secret that underground hip-hop largely exists below the thresholds of the Billboard charts.  Once artists attain the level of commercial success that places them in the upper reaches of the charts, they’re largely considered to have lost their underground status.

Similarly, but more rarely, a few artists who previously cracked the upper portion of those charts later migrate to an underground status by making music that is less commercial and more independent or artist-focused in nature.

MF DOOM was a true underground rap artist from beginning to end.  Having emerged first as part of a hip-hop trio KMD (Kausing Much Damage) in the late 1980s under the moniker Zeb Love X with his late brother DJ Subroc and third member Rodan (who was later replaced with Onyx the Birthstone Kid), DOOM was forced to go solo after the group was cut by major label Elektra Records on the eve of the release of their second album, Black Bastards – a 1993 set that wouldn’t see the light of day until many years later.

Black Bastards is a story in and of itself, a sex-and-drug-hazed album whose title and artwork were considered too controversial by its label and whose scheduled release had been preempted by the accidental death of KMD’s DJ Subroc the same week the group was dropped from the label.  Now considered an underground classic, Black Bastards was heavily bootlegged before finally being released on the much smaller Fondle ‘Em Records in 1998, and rereleased by Sub Verse Music (2001) and finally by DOOM’s own label, Metal Face Records (2008).

That was ironically at the same time that another, similarly named, independent-label underground rap trio named KMC was (lowly) charting with their album Three Men With The Power Of Ten on Priority Records.

And speaking of Priority Records, KMD’s Mr. Hood reached its No. 67 peak on the R&B/Hip-Hop album chart just a week after Priority’s N.W.A. (on the subsidiary Ruthless label) became the first hardcore rap group to top the “pop” album chart with Efil4zaggin (Niggaz4Life), an LP whose No. 1 success was a major milestone for the independently owned/distributed Priority/Ruthless combo.

This is noteworthy in a MF DOOM tribute because of the irony of his first and only charting album up to that point coinciding with the emergence of another form of countercultural hip-hop – gangsta rap – into pop’s mainstream.  The irony of N.W.A. accomplishing this on an independent label while KMD dwelled in the underground trenches on a major label like Elektra isn’t lost on this blogger either.

After KMD broke up and following the eventual release of Black Bastards in 1998, MF DOOM released his first solo album – 1999’s Operation: Doomsday.  It was the album that introduced the MF DOOM moniker, which Dumile said he appropriated from Marvel Comics’ supervillain Doctor Doom to represent himself as not only an enemy of the music industry and what it represented, but also any manifestations of stereotypes which relegated the black man to second-class citizenship.

Operation:Doomsday included three previously released singles and took on a monster-themed aesthetic that had MF DOOM taking on the alias King Geedorah, a three-headed space monster modeled after King Ghidorah from the Godzilla series.  Doomsday has been considered by many critics to be one of the greatest hip-hop albums of all time, despite the fact that it never sold enough copies to chart during DOOM’s lifetime (a fact that will likely change now with his passing).

Next came another solo album on yet another label – Sound-Ink Records – and with another alias, this time Viktor Vaughn (another play on Marvel’s Doctor Doom, whose full name is Victor von Doom).  Like the two albums before it, Vaudeville Villian, was another critical success that also never charted.  Pitchfork ranked it at No. 25 of the greatest albums of 2003, while the publication Pigeons and Planes considered it as one of the 30 greatest underground albums of all time (at No. 25).

MF DOOM’s fourth solo album, Venomous Villain (VV:2), was released in August 2004 through yet another label – Insomniac, Inc. – and, again to critical acclaim.  It, too, never charted in Billboard.

It was quickly followed three months later by the album that some critics called DOOM’s best, Mm..Food, an anagram of MF Doom.  The 2004 concept album (on yet another label, RSE Records) contained songs that all incorporated food or cooking metaphors, with titles like “Hoe Cakes,” “Deep Fried Frenz,” “Fillet-o-Rapper,” “Kookies,” and “Beef Rapp” among its 15 tracks.

The critics loved it.  One (Nathan Rabin of the A.V. Club) called the album “a crazy pastiche tied loopily together around obsessions with food, comic books, and supervillainy” and wrote that DOOM is “exempt from the law of diminishing returns,” owing to his constant innovation and creativity.  The song “Rapp Snitch Knishes” is considered by Complex to be the  “22nd-funniest rap song of all time.”

This budding Billboard success may have been too much for an underground rapper like DOOM and it would be five years before he put out another solo release.  It came in 2009 on a sixth different label (Lex Records) and a project titled Born Like This.

Unlike it’s predecessors, Born not only made the Billboard 200, but debuted at a lofty position of No. 52 with first-week sales of more than 10,000 units in late March 2009.

Boasting collaborations with the likes of Ghostface Killah and Raekwon (both of Wu-Tang Clan fame), Born Like This received good grades from several rags, including Pitchfork, which gave it 8/10 rating, and The Observer, which gave it four of five stars.  Born Like This ranked at No. 4 on The Skinny’s “2009: A Year in Records” list, while Pitchfork included it in their best albums of 2009, placing it at No. 48.

But the album’s commercial success and Billboard 200 chart placement – modest as both may have been for any rapper, much less a veteran one who’d been in the game for 20-plus years like DOOM at that point – was probably too much for an artist who stood against everything represented by the industry, particularly its commercialism and pigeonholed genres.

So DOOM did what any self-respecting underground rapper would do after making an album that scaled the upper half of a major Billboard album chart and placed him on the cusp of mainstream success.  He stopped releasing solo albums altogether!

Thus, Born Like This, which appropriately ended with the 1:14-length track “Thank Ya,” is the last solo album of MF DOOM’s career: six solo albums under six different labels over a ten-year period that saw one Billboard 200 chart entry.

Of course, DOOM has recorded or produced several collaborative albums over the past seventeen years, including 2004’s Madvillainy, a collaboration with frequent DOOM partner Madlib (Otis Jackson, Jr.), who served as DJ.  On that album, DOOM took on the persona Madvillain and the album was released on yet another label, Stones Throw Records.

That album featured some of DOOM’s most ominous production work, with song titles like “Darkness (HBU),” “Disastrous,” and “Caskets” populating the set.

“Caskets” included lyrics in its spoken-word outro that serve as perhaps the most fitting to close this tribute:

“…when you, as an individual, who can’t control what the others do, let loose of your own resistance and go with the flow, then you become one who experiences immediate thriving…”

It concludes: “You have to decide that you don’t care what others think of you.”

MF DOOM, with more than a dozen albums he recorded – either as part of KMD, or solo under his own name or various aliases, or as part of collaborations – and even more that he produced, was an artist who clearly let loose of his own resistance and thrived in ways that most other recording artists could not.

He never remained in one place – artistically or otherwise – changing record labels with each release like they were new outfits.  He never conformed to prevailing hip-hop trends and he never allowed commercial success to either drive him or cloud his artistic vision.

In fact, a top-50 album on the Billboard 200 chart was like kryptonite, it would have been the ultimate insult to an underground superstar like DOOM, and thankfully – no, ironically – it was something he never had to endure in his lifetime.

MF DOOM wasn’t above dropping pop culture references in his lyrics.  As part of KMD on the Black Bastards album, on the song “Smoking That Shit,” guest artist Earth Quake rapped the line, “He tried to get cute, so Earth Quake had to erase him…

“And place him in America’s Top Ten, like Casey Kasem.”

I guess even underground rappers know a top-40 countdown icon when they see one.