Taylor, Sir Paul and Shady combine to create a chart first (kind of)… 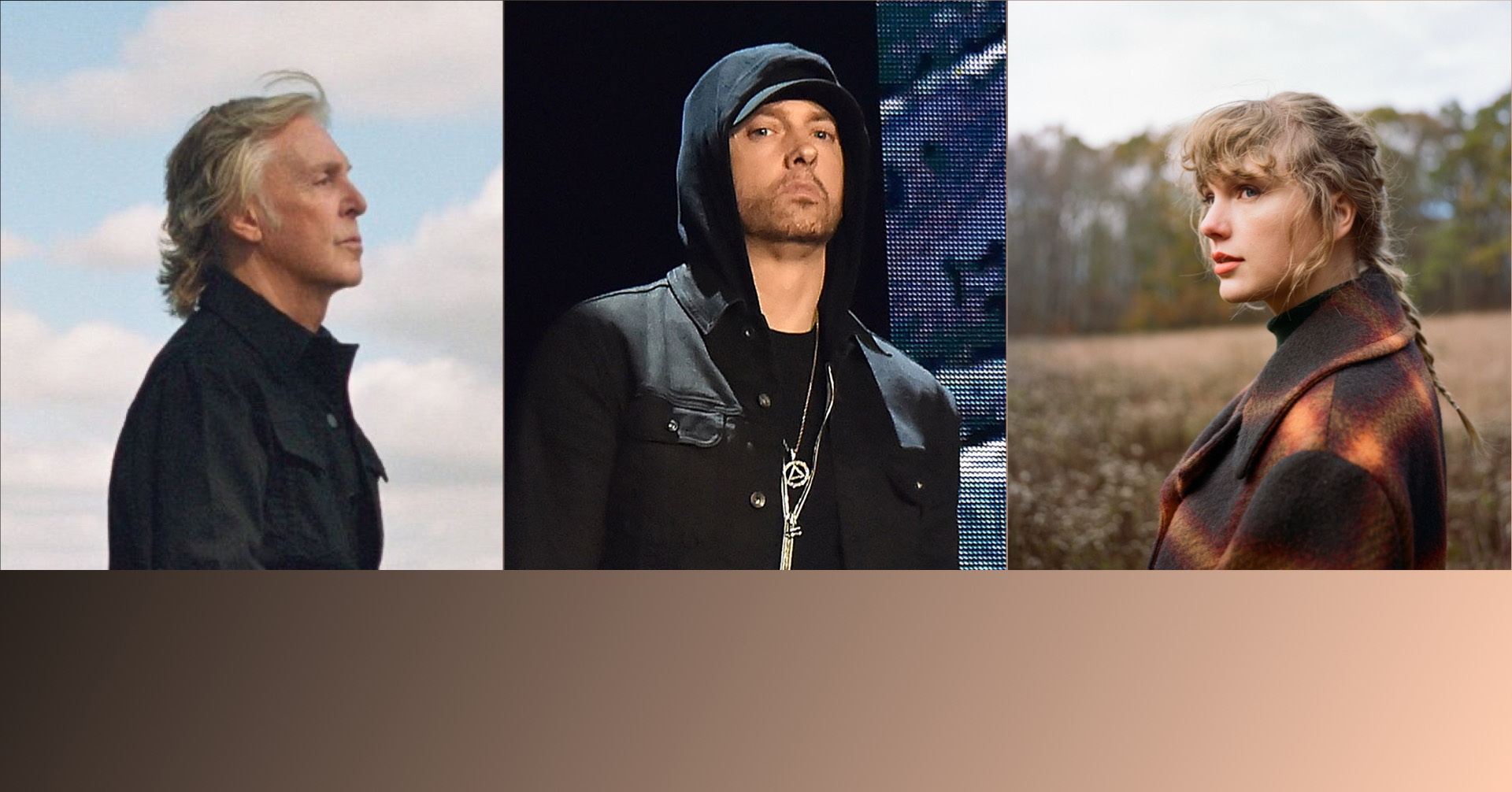 (December 28, 2020).  There may be prior instances of what this article is about to cover, but this blogger doubts it.

Besides, I’m not prepared to do the exhaustive 60-plus years’ worth of album chart research to confirm it.  I’ll leave that to the readers.

Or you could just suffice it to say that, in all my decades of following the Billboard charts, I’ve never seen anything like it.

So here is the blog’s history-making assertion…

Wait, there’s more to it than that, keep reading.

Taylor’s album evermore repeats at No. 1 after its debut there last week.  It’s been billed as the companion (“sister”) album to its predecessor folklore, also a No. 1 album this past summer.

At No. 2 sits Paul McCartney with his critically acclaimed latest release, McCartney III, the album he’s touting as the continuation of its two so-named predecessors, McCartney (1970) and McCartney II (1980).  Those albums peaked at Nos. 1 and 3, respectively, in their release years.

And at No. 3 is Eminem, whose Music To Be Murdered By is listed at No. 3 thanks to a recently released 16-track update billed as Music To Be Murdered By – Side B (Deluxe). The new version comes eleven months after the original and accounts for nearly all of the album’s consumption numbers (streaming, downloads and sales), which powered this week’s 199-3 move up the chart.

Astute readers and chart watchers likely have figured out the mystery by now: the concurrent top-3 rankings of these albums mark the first time in Billboard chart history that the top three consists entirely of albums that are tied thematically to previous releases by those artists.

What’s more, all of these “sequels” occurred in different ways: one a “sister” album to its predecessor, one an album that follows thematically and in numerical succession its predecessors, and one that is a deluxe reissue of an earlier album.

Even more astonishing is that all these albums and their predecessors – a total of six or seven albums, depending upon how you count – have peaked at either No. 1, 2 or 3 during their respective chart runs.

Some readers may be inclined to give Eminem an asterisk here given that Billboard elected to track the sales and consumption numbers for all versions of the album – deluxe or original – and list it under the singular original entry for charting purposes.

But others would not be wrong to point out that Eminem gave the new version and its sixteen tracks a distinct title – Side B (Deluxe) – and, by virtue of its share of the album’s total points, could have easily been given its own billing and a separate chart entry by Billboard.

It is for that reason we are including it in this amazing statistic (heck, even if you omitted it, you’d be hard-pressed to find another occasion where even the top two albums were sequel-ish in nature).

Although another time like this in history doesn’t immediately come to mind, one might be inclined to go back to the chart-topping days of bands like Chicago and Led Zeppelin – both of which regularly numbered their eponymous albums sequentially – to see if the stars aligned to create another chart moment like this one. But I did the homework and they never did align for those two legendary bands.

Similarly, you might be tempted to search the timing of Lil Wayne’s various Tha Carter sequels to see if any of them coincided with, for example, the chart-topping days of, say, a NOW – Thats What I Call Music! album, all of which were numbered sequentially and many of which ranked in the top three during the 2000s.

Well, I searched and actually found one such week in June 2008 when Tha Carter III ranked in the top three at the same time as NOW 28!.

But you’d be cheating if you counted any albums from the NOW! series, as it was nothing more than a bunch of compilations containing various artists’ recent hits.  Plus, you’d still have to find that third album to complete the top three set in June 2008 or any other given period.

Another close-but-no-cigar moment occurred on September 29, 2007, when Kanye West’s Graduation – the thematic followup to his Late Registration and College Dropout albums – debuted at No. 1 while sequel soundtrack albums High School Musical 2 (Various Artists) and Hannah Montana 2: Meet Miley Cyrus ranked at Nos. 4 and 5, respectively.  The prior week, the two soundtracks were at Nos. 1 and 3, respectively, but Kanye’s album had not yet debuted.

So, again my friends, close…but no cigar.

And that, folks, is about as far as I went with my research, which, as I stated in the article’s opening, would require rummaging through 60-plus years’ worth of weekly albums charts and knowing which albums were actually sequels to other releases (some are not so intuitively named).

So DJROBBLOG contends, until proven otherwise, that this is the first week ever that three “sequel” albums – or albums directly marketed by their connection to a previous release by the same artist – occupy the top three positions on the Billboard 200.

I challenge my fellow avid Billboard chart followers to find another such instance and post it either in the comment section below or in any of the social media feeds where this article is posted.

In the meantime, congrats to Taylor Swift, Sir Paul McCartney, and Marshall Mathers, a.k.a. Eminem, on this very unique achievement!