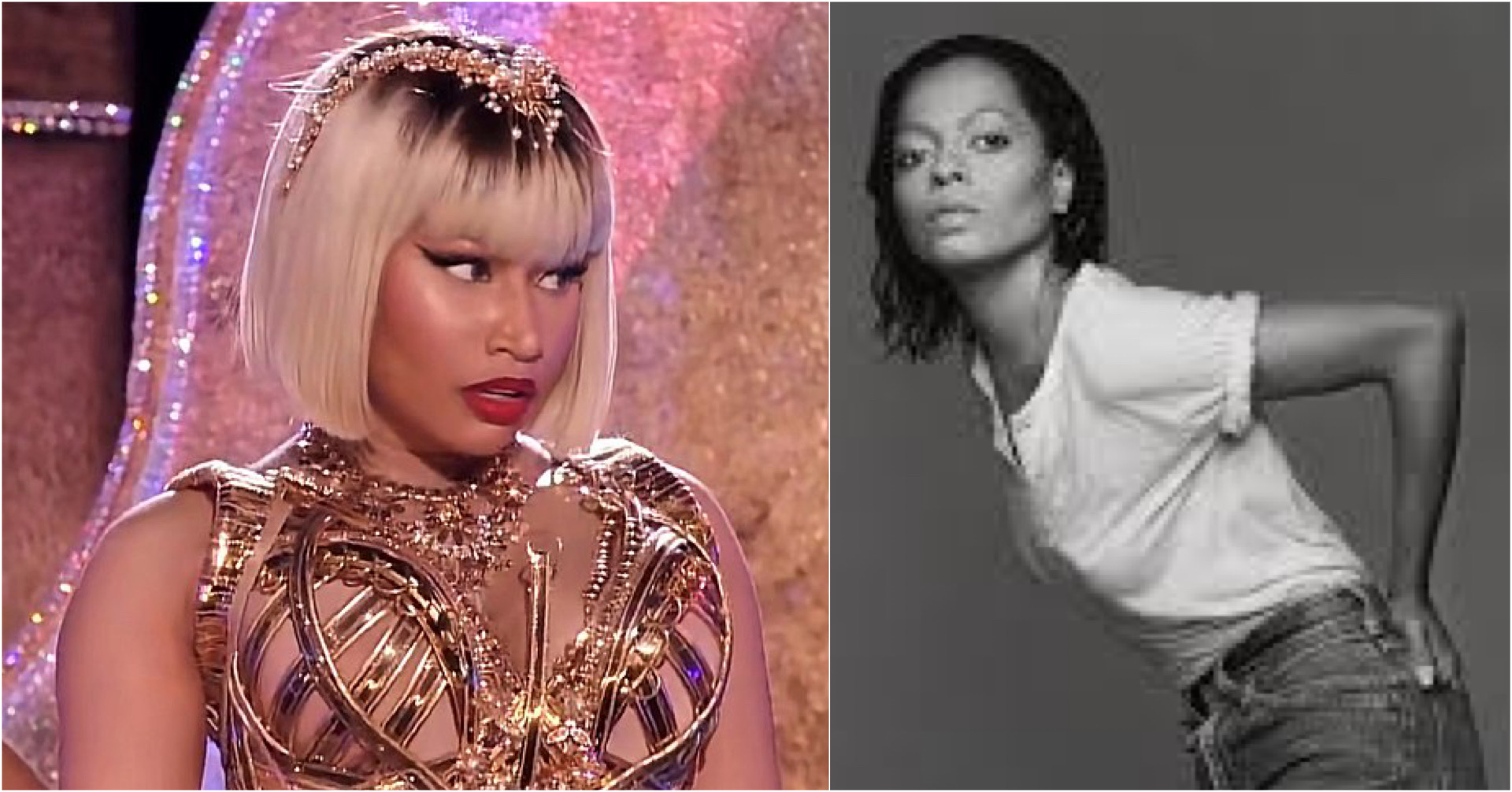 (November 19, 2022).  In an era before Madonna, Whitney, Janet, Mariah, Rihanna and so many other pop music divas after them, there was the highly successful and most supreme diva: Diana Ross.

So successful was she that, at one point before the mid 1980s, Ross—who had been charting for two decades with her group the Supremes, in duets with icons like Marvin Gaye, Michael Jackson and Lionel Richie, and as a solo artist—was recognized as the biggest female pop star in history with 18 Billboard Hot 100 No. 1 songs and dozens more other hits and albums to boot.

Diana Ross seemed to have it all: the prolific recording career and status as the Queen of Motown, eight American Music Awards, a noteworthy acting career with an Oscar nomination and a Golden Globe win, two stars on the Hollywood Walk of Fame, induction to the Rock and Roll Hall of Fame as a member of the Supremes, and various other NAACP, Soul Train, and Billboard awards.

Both Billboard and the Guinness Book of World Records recognized her in the 1990s as the most successful female singer of all time, combining her work with and without the Supremes.

But the one accolade the lady nicknamed The Boss didn’t have during her phenomenal career that many of her peers did was that elusive Grammy win.

Nominated twelve times in pop, R&B and even rock and roll categories for international smash hits like “Stop! In The Name Of Love,” “Baby Love,” “Ain’t No Mountain High Enough,” “Touch Me In The Morning,” Upside Down,” and “Endless Love,” Diana Ross scored zero competitive Grammy wins.

It wasn’t until she took home a non-competitive Lifetime Achievement award in 2012–some 50 years after her first professional recording with Motown—that Ross finally had a Grammy trophy to place on her mantle, causing many to view her earlier losses as intentional snubs or even “personal.”

Fast-forward to 2022 in the days following the announcement of next year’s Grammy nominees and we see another legendary female artist—arguably the biggest ever in her field—with no Grammys to go with her record-breaking catalogue of hits.

Nicki Minaj, who will be 40 next month, is a hip-hop superstar who singlehandedly resurrected the female rap field during the late ‘00s when seemingly no femcees were charting.  She emerged when big-name rappers like Missy Elliott, Lil Kim, Eve, and Lauryn Hill had faded, closing a multi-year-long gap in female hip-hop prominence.

Nicki exploded onto the scene and really hit her stride in the 2010s with dozens upon dozens of chart hits—only Taylor Swift has had more Hot 100 entries among females—and several critically acclaimed albums, including two No. 1s: Pink Friday and Pink Friday: Roman Reloaded.

And it’s that last accomplishment that begins the dubious similarities between her and the iconic Ms. Ross.

Yet, like Ross, Minaj has zero wins to show for it.

That’s an anomaly that won’t change after the next Grammys in February 2023:  Minaj wasn’t nominated in any category this year, despite scoring the most enduring hit she’s had in eons with the No. 1 Hot 100 single “Super Freaky Girl.”

In her own view, either that track or “Do We Have A Problem,” the No. 2-peaking tune she released earlier this year with Lil Baby, should’ve given the rap Barbie at least one nomination for music’s most prestigious award.

Instead, the Rick James-sampled “Super Freaky Girl,” which was controversially removed from rap category eligibility in October after being deemed a “pop song” by the Recording Academy, didn’t get a nomination in either field—pop or rap.

Nicki wasn’t pleased about the pop categorization, calling it “unfair” in a series of since-deleted tweets that unwittingly began a Twitter feud with rap newcomer Latto. Nicki’s fans, the Barbz, were equally unhappy about the overall shutout, citing her “GOAT” status in several tweets and other social media posts.

But the big career zero is eerily reminiscent of the fate that Diana Ross endured after years of selling millions of records and topping the charts at levels beyond that of any of her female contemporaries.

Ironically, it’s Nicki’s genre dilemma that may reveal a key reason for both artists’ noteworthy snubs—a reason that goes beyond the fan-popular “the Grammys are rigged” conspiracy theory.  Despite their phenomenal record sales—which historically has never been a reliable indicator of one’s Grammy worthiness—Nicki and especially Diana have straddled one too many genres in their attempts to crossover.

In Diana’s case, she’s a Black woman that sang mostly pop music.  Her songs were big hits on Billboard’s soul chart, but overall they were even bigger on the Hot 100.

So when Diana was nominated in soul music fields like Best Female R&B Vocal Performance, she hardly stood a chance against more soulful legends like Aretha Franklin.  In 1972, for example, Ross went head-to-head with the Queen of Soul in the R&B vocal category with her version of Aretha’s earlier hit “Call Me.”  That song lost to Aretha’s cover of the Simon & Garfunkel classic “Bridge Over Troubled Water.”  Aretha, in fact, won the first eight Grammys in the Best R&B female category from 1968-75.

Similarly, Ross’ disco-pop nugget “Love Hangover” lost in 1977 to Natalie Cole’s funkier “Sophisticated Lady.”  The following year, Ross’ less memorable “Your Love Is So Good To Me” lost to Thelma Houston’s rousing classic version of “Don’t Leave Me This Way.”

Three years later, Ross’ “Upside Down”—arguably the funkiest tune she ever recorded—lost in the R&B vocal category to Stephanie Mills’ vocal powerhouse “Never Knew Love Like This Before.”  Two years after that, Ross’ cheesy Michael Jackson-penned hit, “Muscles,” lost to Jennifer Holliday’s soul-stirring rendition of “And I Am Telling You I’m Not Going.”

Can you honestly say that any of Ross’ nominated hits—as monumental as they were—deserved wins over that soulful competition…in the soul category?

On the pop/rock side, Diana was equally successful in getting nods, but just as unsuccessful in taking home the trophy.

In 1971, the anthemic, Ashford & Simpson-produced “Ain’t No Mountain High Enough”—the only song by a solo female to hit No. 1 pop the prior year—lost to Dionne Warwick’s Burt Bacharach and Hal David pop gem “I’ll Never Fall In Love Again.”  In 1974, the torchy “Touch Me In The Morning” lost to Roberta Flack’s iconic (and even bigger pop hit) “Killing Me Softly With His Song.”

Ross’ losses in the pop duo or group category were a little more dubious:  The Supremes smash “Stop! In The Name Of Love” lost to the Statler Brothers’ “Flowers On The Wall” in 1966 (when the category was called Best Rock and Roll Performance), and her biggest hit overall, “Endless Love” (with Lionel Richie), was K.O’d by Manhattan Transfer’s snazzy “Boy From New York City” in 1982.

It’s losses like those that give at least some credibility to the theory that Ross was just not popular among Grammy voters, many of whom lived through (and were still smarting over) her unceremonious departure from the Supremes in 1970.

In Nicki’s case, the genre-splitting isn’t as apparent as Ross’ since Minaj makes songs that fall primarily in the rap category.  Her lone pop nomination came in 2015 when her collabo with Jessie J and Ariana Grande, “Bang Bang,” lost to A Great Big World and Christina Aguilera’s “Say Something.”

Otherwise, with the exception of her Best New Artist loss to Bon Iver in 2011, and her Album of the Year loss to Adele’s 21 as a featured act on Rihanna’s Loud album in 2012, all of Nicki’s defeats have been in the rap field.

Note: Unlike Ross who could compete in female-specific pop and R&B categories for most of her career, Minaj has to compete with men in all of the Grammys’ rap categories, which provides another difficult narrative for not just Minaj, but female rappers in general.

Here’s a table listing the losses Nicki’s piled up over the years in various rap categories:

Taking L’s to iconic rappers like Jay-Z, Kanye West and Kendrick Lamar is nothing to sneeze at, but it’s clear that Minaj’s highly sexualized Barbie Doll schtick isn’t viewed as favorably in the male-dominated rap field known more for its toxic masculinity and misogyny than its respect for female expression.

And with Kendrick being nominated this year in all three rap categories for which Minaj would have been eligible—Best Rap Performance, Best Melodic Rap Performance, and Best Rap Song—perhaps the Academy was doing her “Super Freaky Girl” a favor by limiting its eligibility to the pop field, where it might have stood a better chance.

As it turns out, Nicki wasn’t nominated in that category either, which lends some credence to the conspiracy theories that Nicki’s fan army, the Barbz, has espoused over most of her professional career.

The Barbz may have to eventually face the painful possibility that Minaj might never win a competitive Grammy in that storied career.  And, if she follows Diana Ross’ Grammy trajectory, as she has thus far, Nicki may have to wait until she’s well into her 60s or 70s before she gets that consolation prize—the lifetime achievement award—that Ross received a decade ago.

Meanwhile, Diana, who is 78, is making another attempt at a pop Grammy at the next ceremony in 2023.  Her latest studio release Thank You was nominated for Best Traditional Pop Vocal Album and is Ms Ross’ first Grammy nom in 40 years (since 1982’s “Muscles”).

We’ll see in February whether Ross can get that first competitive category win (after 60 years of recording).

One thing you can guarantee: Nicki Minaj won’t be at the ceremony to witness it.

Grammy fairness monitor DJRob (he/him/his) is a freelance music blogger from somewhere on the East Coast who covers R&B, hip-hop, pop and rock genres – plus lots of music news and current stuff!  You can follow him on Twitter at @djrobblog.