Spotify Wrapped and Me: An old(er) guy’s most listened-to songs and artists of 2021; the list may surprise you. 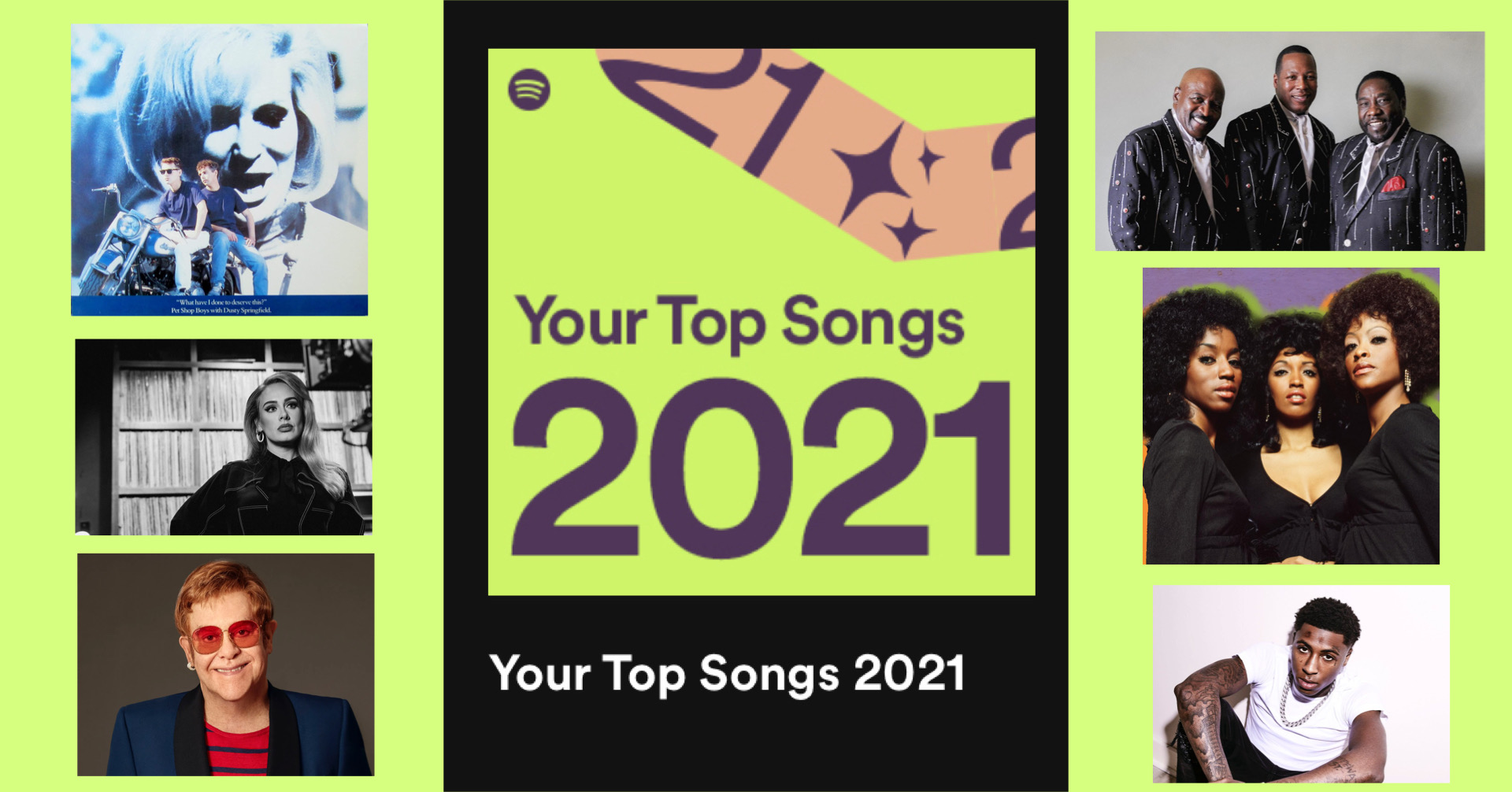 (December 4, 2021).  Each year at this time, Spotify recaps subscribers’ streaming history in a cool retrospective called “Spotify Wrapped,” which lets users know what their most listened-to songs, artists and genres were for the past 12 months.

This year’s unveiling was very high-profile, with “Spotify Wrapped” a trending topic on various social media platforms, with the intent made very clear: share, share, share!  So I’m doing my duty to do just that…with this article.

I must admit, each year even I’m a little surprised by the tally they create for me.

This year was no different.

First, it’s important to note that, as a music blogger, my annual Spotify lists are generally influenced by what I’m blogging about, not necessarily what my favorite songs or artists are (that’s my disclaimer and I’m sticking to it!).

But often it’s a combination of both, and that happens to be the case (mostly) in 2021…just as it was last year.  For example, last year’s No. 1 act was the progressive 1970s pop/rock band Supertramp, a longtime personal favorite whose 1977 album Even In The Quietest Moments was at the top of my list.  I binge-listened to it while writing a retrospective review of the album in the blog’s “Three Old Guys” series (hey Mike and Scott, I miss doing that!).

In a complete left turn, at least genre-wise, this year’s No. 1 act is the O’Jays.  And the No. 1 genre for me was Soul music.

You can’t go wrong with either of those two, but even I was a bit surprised to find the legendary O’Jays at the top of my list.  But then I remembered the article I was working on that likely put them there.  It was my ranking of Philadelphia International Records’ 100 greatest songs as part of a 50th anniversary celebration earlier this summer.

The O’Jays, who hail from Ohio but were a Philly Soul staple, had 23 songs on that retrospective, and even if I listened to the accompanying Spotify playlist just twice, that’s 46 hits for the O’Jays (we all know I played it morethan twice, plus each song was listened to at least once while I was developing the list, so there’s that).

According to Spotify, I spent 592 minutes listening to the O’Jays this year.  If each of their songs averages four-and-a-half minutes, that’s about 131 different O’Jays song listens for 2021.  Spotify also calculated that I was in the top 0.5% of O’Jays listeners this year, meaning I was definitely one of their top fans in 2021.

The top song by the O’Jays for me in 2021?  Well, interestingly, it was one that only ranked No. 25 on my overall most listened-to songs: “Your Body’s Here With Me (But Your Mind Is On The Other Side of Town).”  The next highest O’Jays songs were also ones I’ve rarely thought about in other years: “Brandy,” “Sunshine,” “Sing A Happy Song” and “Let Me Touch You.”

Considering my all-time favorite O’Jays records are, in order, “Back Stabbers,” “Darlin’ Darlin’ Baby,” “Message In Our Music,” “Family Reunion,” and “Use Ta Be My Girl”—none of which made my Spotify top 50–I can only guess that I was so familiar with them already that I didn’t need to listen to those songs while developing the Philly International anniversary article.

But the O’Jays weren’t the biggest surprise on the list of my top-five Spotify artists of 2021.  Here’s the recap, and you’ll see why one or more of these I would have never expected to see on the list:

Elton John?  Makes sense (even if the main source was his 2021 album).

Fifth Dimension?  Guilty pleasure I’ll never tire of, and whose song “The Declaration” reminded me of how, as a child, I learned the preamble to our Declaration of Independence.

Michael Penn?  I rediscovered the big brother of actors Sean Penn and Chris Penn (and husband of Aimee Mann) while going over a 1990 playlist in prep for a song tournament in which I participate in a Lost Pop Hits Facebook group.  Penn’s 1989/90 hit, “No Myth,” is sublime, as is its follow-up, “This and That.”

The only way I can explain the 22-year-old Gen-Z rapper (real name: Kentrell DeSean Gaulden) out-ranking some of my favorite all-time artists (Stevie Wonder, Chaka Khan, Chic, Diana Ross, Rolling Stones, Bee Gees, and Earth, Wind & Fire, among others) is that I had his latest album, Sincerely Kentrell, on repeat (!) as I was reviewing it upon its release in October.  Quick note: NBA YoungBoy has had four No. 1 albums since October 2019 (more than anyone else in that span who isn’t named Taylor Swift or BTS).

In fact, I’m listening to Sincerely Kentrell as I type this, in my attempt to understand what catapulted NBA YoungBoy to my top five artists list for 2021.  Yeah, that’s the reason (and I’m sticking to it).

Of the 727 artists (in 52 genres) I listened to on Spotify this year, those were the top five. And now for the songs.

This list won’t surprise many people who know that I’m an old-school pop music guy at heart.  Of the top 25 songs (Spotify created a list of 100, the playlist is linked below), the only songs that were released in 2021 were, surprisingly, by Elton John on his new album The Lockdown Sessions.  Everything else was recorded before 1990.

Astute fans of Philly Soul (and Philly International in particular) will note that the genre dominated my 2021 playlist as 13 of the Top 25 songs are by Philly International artists, clearly a reflection of the commemorative 50th anniversary article and my reconnection with the label’s legendary catalog.  The songs at Nos. 4, 8, 9, 11, 12, 13, 15, 16, 19, 20, 23, 24 and 25 are all associated with Philly International.

Some readers might be surprised at the No. 1 song, but “What Have I Done To Deserve This” has long been a personal top bop (it was my favorite song of 1988), so reconnecting with it in the wake of the Pet Shop Boys’ resurgence following the use of their earlier hit, “Opportunities (Let’s Make Lots of Money)” in this Allstate commercial wasn’t much of a stretch.

Other rediscoveries this year included The Friends of Distinction’s 1970 top-10 hit “Love Or Let Me Be Lonely” and The Three Degrees’ “I Didn’t Know,” a lost follow-up to their classic, question-filled smash, “When Will I See You Again.”

Here is the entire top 100 songs playlist in my personal Spotify Wrapped for 2021.

Total minutes spent listening to music on Spotify this year: 12,527, which is more than 62% of other listeners in the United States.

Of course, those 12,527 minutes probably don’t come close to the total number of minutes I spent listening to music in 2021, as I have several other sources, including SiriusXM, my car’s hard drive, and my Apple iTunes library (where Steve Miller’s “Abracadabra” always comes on first when I connect my phone to the car’s stereo, by virtue of the fact that I have the songs arranged alphabetically by title).

For that reason, I’m sure that “Abracadabra,” “Ain’t Gonna Hurt Nobody” (by Brick), “Ain’t That Peculiar” (Marvin Gaye), “Ain’t To Proud To Beg” (Temptations) and the songs that come immediately after those in alphabetical order would rank very high on any recap that took into account all of my listening sources.

One all-time guilty pleasure did appear, however, as it does every year: Diana Ross’ “Upside Down,” which ranked as my 50th most-listened to song of 2021 on Spotify.  Last year it was No. 6, behind five Supertramp songs from Even In The Quietest Moments.

And that’s a wrap—thanks to Spotify Wrapped—of my personal listening habits for 2021.  What were some of yours?

Feel free to provide yours in the comment section below or in any of the social media feeds where this article is posted.

Even if it’s not supported by a streaming company’s recap.