Grammys2020: Aerosmith and Run-DMC perform the hip-hop game changer that shot both to the Rock Hall of Fame 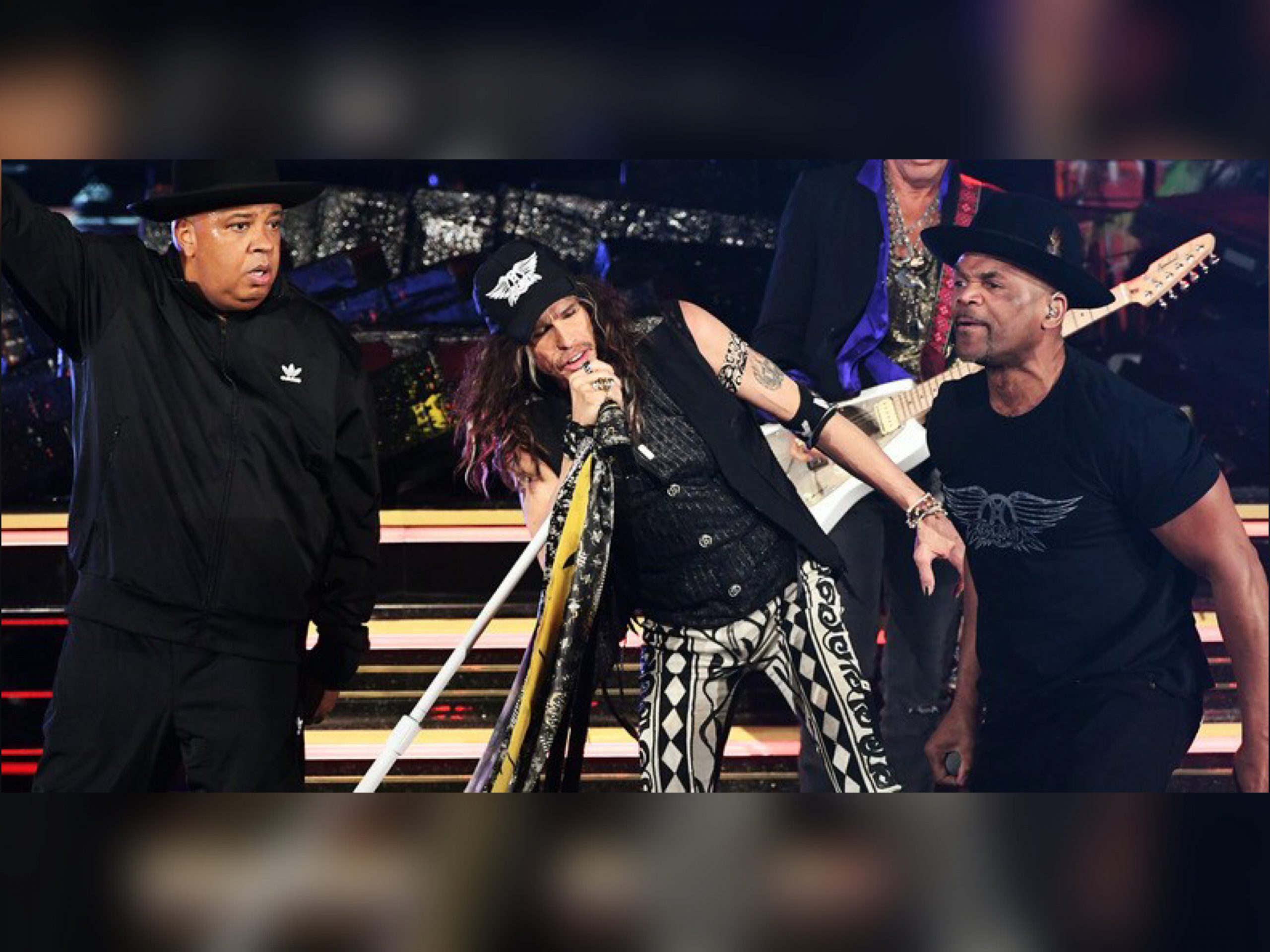 (January 27, 2020).  As I watched Sunday night’s Grammys, I couldn’t help but reflect on how far hip-hop has come – despite Sean “Diddy” Combs’ earlier protests to the contrary.

Rap/hip-hop was all over the telecast Sunday night, and nothing was more telling of the genre’s evolution than its merger with many other genres – as captured by many of this night’s performances.

For example, few hip-hop Grammy performances have been as incendiary and intense (and entertaining) as what Tyler, the Creator put on during his fiery appearance with R&B greats Boyz II Men and everyone’s favorite uncle Charlie Wilson (formerly of the legendary Gap Band).

But nothing was more symbolic of the rap collabo – and its importance to hip-hop’s permanent mainstream status – than the reunion between rock legends Aerosmith and hip-hop pioneers Run-DMC, who gave a spirited performance of their joint 1986 classic “Walk This Way.”

Perhaps the only thing more history-connected than having both groups on the Grammy stage together was the fact that each group’s original beat-keeper was absent.  Joey Kramer, Aerosmith’s founding drummer, was told by his band mates days earlier that he couldn’t perform with them on this night due to lack of practice.  And Jam Master Jay, the slain Run-DMC deejay who died in 2002, was also missed.

But something else suddenly dawned on me while watching the two groups perform their rap/rock classic together. It occurred to me that neither act would be in the Rock and Roll Hall of Fame today if it hadn’t been for the other.

More pointedly, if Run-DMC hadn’t covered Aerosmith’s 1976 rock classic “Walk This Way” on their 1986 album Raising Hell, then Aerosmith’s career wouldn’t have received the injection it so desperately needed, one that no doubt led to their major comeback, their phenomenal second career, and their ultimate induction to the Hall in 2001.

In turn, if it weren’t for Aerosmith’s agreement to allow Run-DMC to cover “Walk,” a rock anthem that none of the rap trio’s members had heard before their manager Rick Rubin suggested it, they clearly wouldn’t have achieved multi-platinum crossover success – something no other rappers had ever done at that point in 1986 – and the course of hip-hop history might have been totally altered, or at least significantly delayed.

You say Aerosmith are rock royalty who were no-brainers for the RRHOF, and you argue that I’m only half-right because it’s Run-DMC who rode Aerosmith’s coattails and that it’s only they who owe a world of gratitude to the boys from Boston whose original “Walk” provided the foundation for the hip-hop group’s eventual recognition by the mainstream and their 2009 RRHOF induction?

Well, you’d be forgetting music history if you didn’t recall how it was the 1986 collaboration that brought Aerosmith’s drug-hazed career from the ashes after ten years of relative dormancy both on the charts and in the public’s consciousness.

The only top-30 hit that Aerosmith had between the 1976 version of “Walk This Way” and the 1986 hip-hop remake was their forgettable cover of the Beatles “Come Together,” a No. 23 chart hit that had been included on the soundtrack of 1978’s major flop Sgt. Peppers movie starring The Bee Gees and Peter Frampton.

If it were not for the 1986 version of “Walk This Way” by Run-DMC, who at the time were easily hip-hop’s most accessible act – we might not have heard much more from Aerosmith, a band whose earlier biggest hits “Sweet Emotion,” “Dream On,” and the first “Walk This Way” were all more than a decade old, and whose previous attempt at a comeback – 1985’s Done with Mirrors album – had completely flopped.

If not for members Steven Tyler’s and Joe Perry’s fateful connection to hip-hop’s then-hottest act, there might not have been a Permanent Vacation, the 1987 album Aerosmith recorded in the wake of the top-5 success of “Walk,” which, by the way, had just become the highest-charting hit for both Run-DMC and Aerosmith at that point, even higher than the original version.

There might not have been a Pump, the 1989 album that gave us classics like “Love in an Elevator” and “Janie’s Got a Gun” and “What it Takes.”  There may not have been any of those memorable Alecia Silverstone videos in the 1990s or that first No. 1 hit, “I Don’t Want to Miss a Thing” in 1998.   All of that only occurred because of Aerosmith’s renewed relevance, which was sparked by their timely connection with a set of hip-hop legends whose career was clearly on a faster trajectory than the rock band’s was when their worlds collided in ‘86.

Maybe you’re one of those who believe that Aerosmith’s pre-1986 output alone was enough to get them in – or that Run-DMC would’ve reached mainstream consciousness without dabbling in a rock classic like “Walk This Way.”

Or you might argue that other acts from both the rap and rock worlds have gotten into the RRHOF with fewer credentials than either Aerosmith or Run-DMC had prior to 1986.

But it’s hard to imagine that Aerosmith’s handful of hit singles and viable album cuts from the first part of their career alone would have been considered iconic enough for their eventual consideration.

As for Run-DMC, the “Walk This Way” collabo was truly a game-changer that singlehandedly set in motion the course of events in hip-hop history that led to the genre’s mainstream acceptance and recognition.

It meant that rap and hip-hop could no longer be ignored, which led to more than 200 hip-hop albums that have topped the main Billboard album chart since 1987, billions of dollars of rap revenue over the past three-and-a-half decades, and the ultimate inclusion of seven hip-hop acts in the Rock and Roll Hall of Fame, including Run-DMC.

That’s not to mention their permanent place in American popular culture as rock’s finely aged elder statesmen and one of its oldest active bands.  Indeed, Aerosmith just announced its 50th anniversary concert at Boston’s Fenway Park this coming September.

So history dictates that each act – Aerosmith and Run-DMC – was essential to the other one getting into the Rock Hall, and their Grammy reunion was an homage to that fact, as well as an unspoken recognition of the cultural importance of “Walk This Way,” the song so instrumental in hip-hop’s evolution as the major player it is today.

It was indeed a game-changer, one that both Run-DMC and Aerosmith can credit for changing their careers and, by extension, hip-hop and rock and roll forever.