Chicago club targets hip-hop and youth after one patron mows down three others ‘execution’ style; unfair or right move? 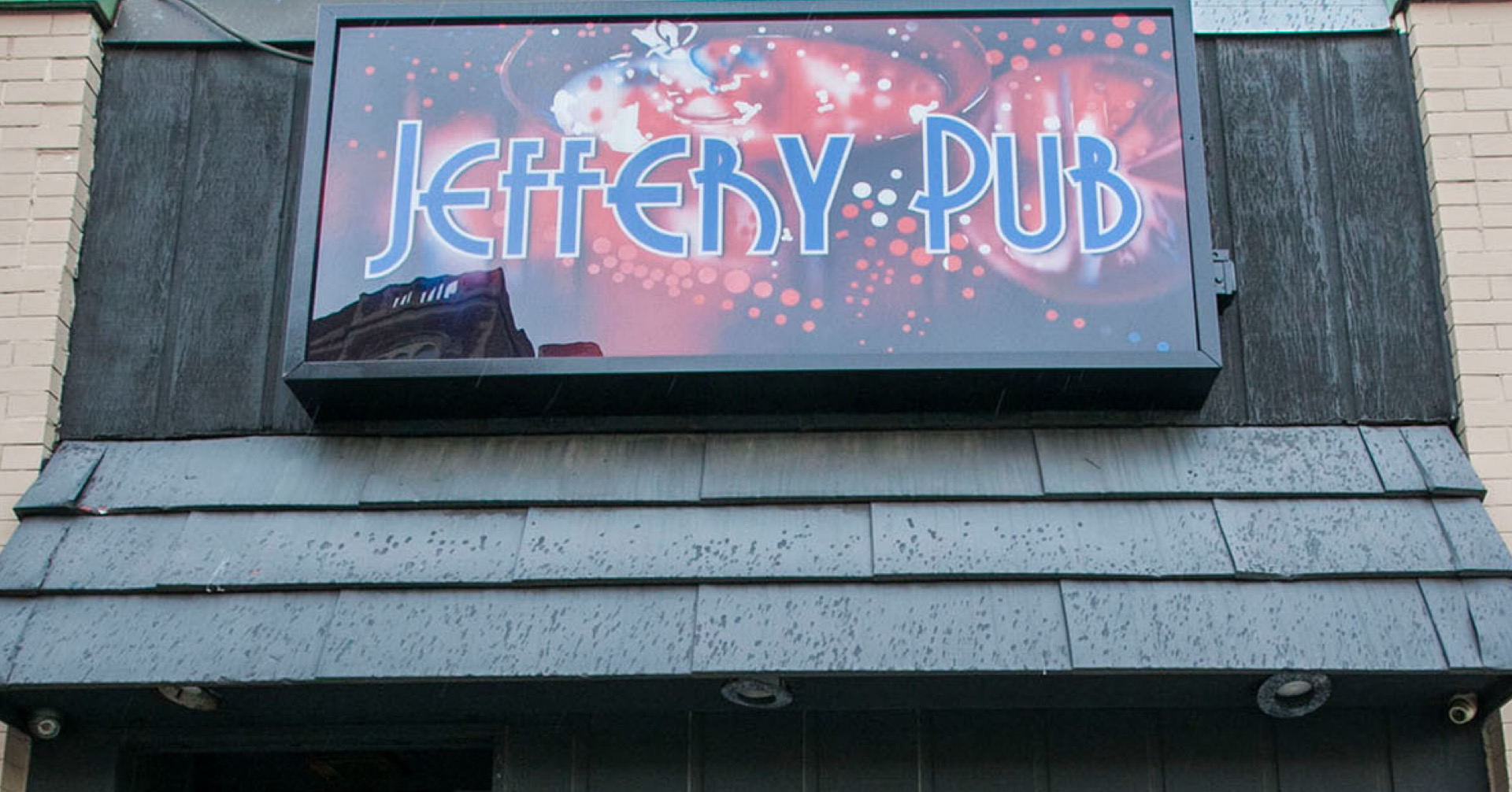 (August 28, 2020).  I’ve been following this tragic story ever since it unfolded a couple weeks ago.

In the early morning of Sunday, August 14 while a conflict erupted among club patrons outside Jeffery Pub, a popular, Black-owned LGBTQ spot on the city’s south side, another patron got into his car and sped towards individuals who were fighting in the street.

With his gas pedal pressed all the way down, according to reports citing the car’s black box data, the driver reached a speed of nearly 60 miles per hour before slamming directly into four men, instantly killing three of them and injuring the fourth.

The driver, a previously convicted felon since identified as Tavis Dunbar, 34, sped off with no attempt of slowing down while mowing down his victims, before parking his extensively damaged car four blocks away.

Disturbingly graphic video of the hit-and-run incident quickly circulated on social media and Dunbar ultimately turned himself into Chicago authorities who charged him with three counts of murder and one count of attempted murder. He’s currently being held without bail.

The apparently deliberate incident happened around 5am… moments after the Jeffery Pub closed and the patrons tussled in the street.  All of them—including the driver—had been inside the club earlier, according to video footage.

The victims—identified as Donald Huey, Devonta Vivetter, and Jaylen Ausley—were all in their twenties.  All of the individuals involved were Black. All of them left grieving family and friends searching for answers as to why such a horrific crime was committed.

The Jeffery Pub is Chi’s oldest Black-owned LGBTQ bar and one of the few such pubs still operating in the nation’s third-largest city.  With operating hours that stretched to 5am before the August 14 murders, it catered to a younger crowd that often treated it as an after-hours spot.

The club’s owner, Jamal Junior, had a particular response to this unfortunate situation—one that has come under fire from some in the community, many of whom cite factors unrelated to his business decision as contributors to the events of August 14.

Mr. Junior announced at a town hall meeting on Thursday, August 25, that he was banning customers younger than 30 and will play less hip-hop at the Jeffery Pub, a move some—particularly those in the younger community—considered unfair while noting that the person charged in the hit-and-run is 34, someone who had been previously sentenced to seven years in prison for earlier violent assaults.

In addition to allowing no one under 30 and playing less hip-hop, the club will also close earlier (at 3am) than its previous 4am weekdays and 5am Saturday hours.

Well, aside from the notion that nothing good can happen that late at night with a large group of likely inebriated young adults, it’s that hip-hop culture was a contributor to what took place at the Jeffery Pub on August 14 and, by extension, is what’s plaguing the Black community in general, particularly on Chicago’s south side.

Hip-hop music wouldn’t be hip-hop if it wasn’t under some kind of scrutiny.  It’s been that way from the beginning.

In its nearly 50-year existence, the music form created and honed by Black people has been derided by the larger society for its musical and lyrical content and the attitude that often comes with it.

Whether it was the excessive sampling of older music (often without license, initially) or the spoken-word art form of rap itself, the music and its artists have routinely come under fire by purveyors of more socially acceptable music types, despite hip-hop’s emergence as the most popular form of music in entertainment today.

In its early fledgling years, however, hip-hop music spoke to Black youth in ways that no earlier forms had previously.  It wasn’t the first music to tackle issues that uniquely affect poor Black people (that distinction goes to people like Nina Simone, Billie Holiday, Sam Cooke, Gil Scott Heron, etc), but it was the first to do it in ways that younger people in our communities could relate to (by people like Grandmaster Flash, Whodini, Boogie Down Productions, etc.).

With lyrics that vividly narrated street tales happening in the nation’s toughest cities (dating all the way back to Grandmaster Flash’s “The Message” in 1982), hip-hop resonated with a generation—my generation—that gave Black people a unique voice in society, one that had not been heard before.

The problem with that is mainstream hip-hop isn’t as diverse as it used to be.  While today’s rap defenders will be quick to cite past examples of where hip-hop crossed the line topically (NWA, Public Enemy among them), that era’s hardcore rappers coexisted within a much larger set that included more introspective artists like De La Soul, Brand Nubians and A Tribe Called Quest, or fun ones like Fat Boys, Skee-Lo and, dare I say, Will Smith.

Back then, for every Foxy Brown, Lil Kim or Trina, there was a Queen Latifah, MC Lyte or Lauryn Hill to balance the scales.

Today hip-hop exists largely (with few exceptions) as a drug-induced, violent and hypersexual culture where rappers are no longer simply “reporting” what they saw on the streets as early artists did, but expressing it as part of their own existence, basically glorifying, or worse, living it.

Artists constantly portray themselves as better or richer than their counterparts (based primarily on such base criteria as what material possessions they own, how frequent or how good their sex is, or the degree to which they can exact revenge on those who perpetrate against them).

To that last point, many of them describe scenarios where someone is often coming for them or their possessions, and that the consequences of such infractions will be violent.

It’s a very superficial, yet adversarial and often paranoid existence, at least as portrayed in much of the lyrics.

So inextricably linked are the rapper’s persona and the music he or she performs today that hip-hop advocates (older artists like Jay-Z among them) have had to push for legislation just to prevent rappers’ lyrics from being used as evidence against them in violent criminal cases.  And this is not to mention the almost weekly reporting of some young Black rapper who was gunned down on the streets homicidally.

By extension, many of the people who listen to hip-hop likely do so exclusively.  It has been the most consumed form of music for the past five years and counting, according to Billboard’s data provider Luminate.  This is largely because of streaming platforms that have made the music much more accessible and affordable.  Listeners no longer have to plop down tens of dollars per album to hear their favorite artists.  They’re available on demand to a young, tech-savvy generation at the click of a smart-device button.

Without the proper tools to separate fact from fiction and settle their differences in ways that don’t mimic rap lyrics, young adults—Black ones in particular who lack other role models or whose lives have already been devalued in society—resort to extreme violence for redemption.

A Hard Decision; Maybe a Necessary One

It’s under these premises that Mr. Junior, whose Jeffery Pub operates in one of the city’s most violence-plagued areas, likely made his business decision… one that no doubt came with a lot of soul-searching (it couldn’t be easy to deal with the deaths of three of your patrons at the hands of another on your street front).

But critics are saying his move was unfair to the young Black LGBTQ community whose musical diet largely consists of hip-hop and who have few other club options within a 20-mile radius.

Some at the city hall meeting where Junior made his announcement cite police negligence on Chicago’s south side as a primary reason for the continued violence.  They noted in particular the 20 minutes that it took for city police to arrive at the scene of the crash on August 14, or the one hour they took to respond to initial calls of an assault in progress at Jeffery Pub.

Mr. Junior “is going to face a lot of criticism for changing the age range and receive a lot of backlash from the younger community, who are not at fault but are being penalized for this,” one resident told the audience at the town hall meeting.

But Junior reportedly defended his position. “More police will patrol the area on days larger crowds are expected,” he said (according to an account in blackclubchicago.org).

“I figure that once you reach a certain age in life, you should learn how to handle yourself,” Junior continued. “My security guards who are outside the perimeter of Jeffery Pub cannot control the sidewalks and the streets. It’s very difficult for the Police Department to control it.  Before pointing fingers, look at the facts.”

Does he have a point?  Or did targeting the youth and hip-hop in particular take it a step too far?

His bottom line may be impacted for a while, but it won’t be solely because of his business decision going forward.  Operating hours, age-limits and hip-hop playlists aside, three men whose lives were indeed valuable died near its premises after having partied there moments earlier.

That in itself would seem to be enough of a deterrent, at least in the immediate future.

I reached out to Mr. Junior via his Facebook page for this story and he directed me to his publicist, who I contacted.  She had not responded as of press time.  I will update this article if/when I hear from them.

2 thoughts on “Chicago club targets hip-hop and youth after one patron mows down three others ‘execution’ style; unfair or right move?”