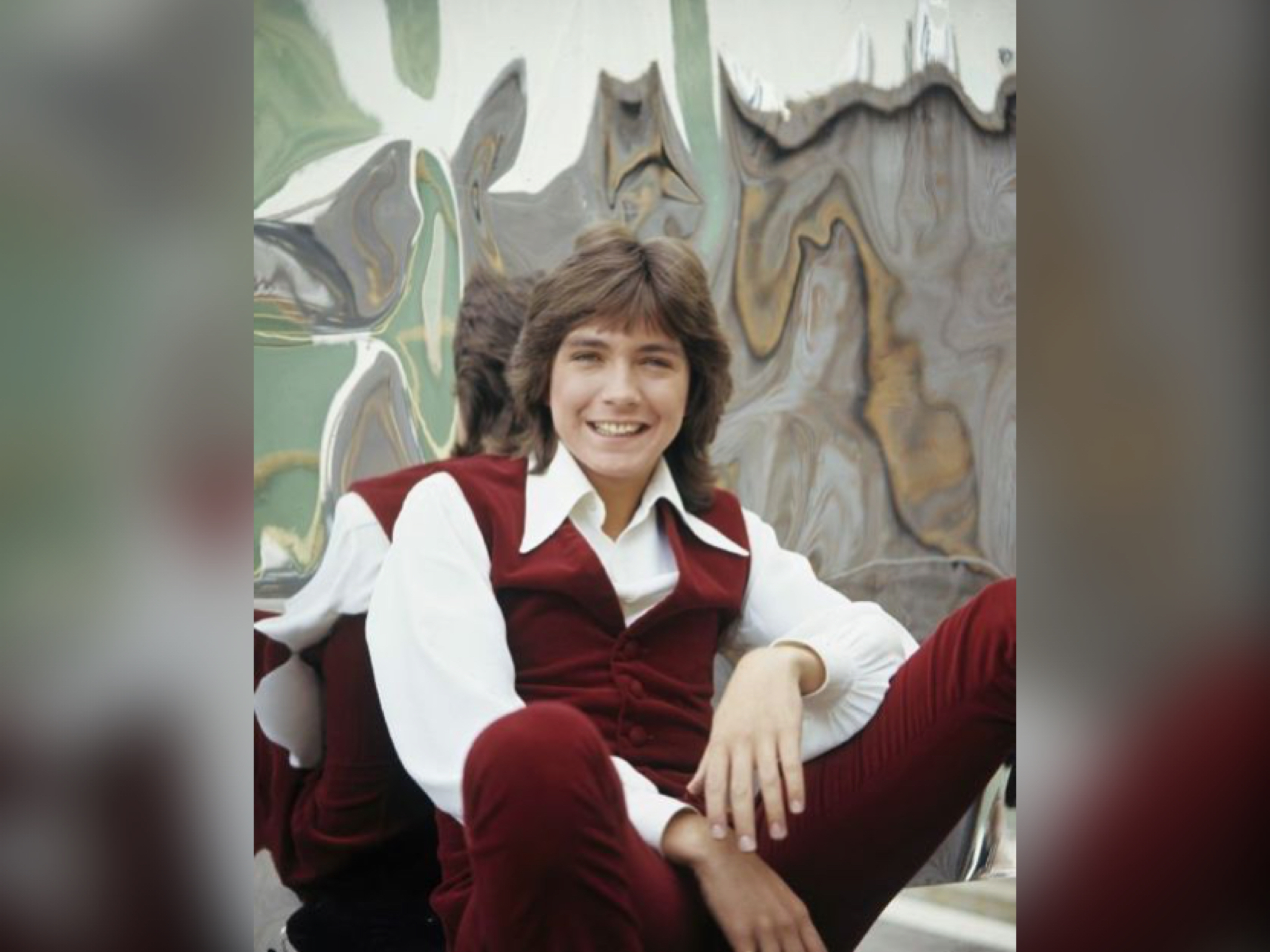 I debated long and hard about this.

Should I write yet another tribute for a fallen musical artist – the umpteenth such loss in the past couple years.  Heck, this past week alone there’ve been six notable losses in Mel Tillis, Della Reese, Pete Moore (of the Miracles), jazz vocalist Jon Hendricks and Malcolm Young (of AC/DC).

David Cassidy, the former teenage heart-throb (while in his early 20s) and frontman for fictional TV singing group The Partridge Family, who died Wednesday, November 21, at the age of 67.

Cassidy played oldest brother “Keith” Partridge of the fictional TV family that really wasn’t that fictional – they actually had chart hits under that name, although the only real singers on their records were Cassidy and his real-life step-mom Shirley Jones (along with backing vocals provided by a Los Angeles-based group known as the Ron Hicklin Singers).  We didn’t know it then, but the younger four “siblings” who lip-synced their way through countless songs and whose pictures were plastered all over the albums were essentially Milli Vanilli before we even knew what a Milli Vanilli was.

Shirley Jones was a veteran actress who played the full-blooded, widowed Mom to Cassidy’s Keith and the four other siblings bearing the sitcom’s name.  They were loosely modeled after the real-life family group The Cowsills, who’d had big hits in the late 1960s with “The Rain, The Park and Other Things” and “Hair,” among others.

The younger Partridges, for the most part, played bit roles to Cassidy’s and Jones’ characters, with maybe the exception of middle son “Danny,” played by ginger-haired Danny Bonaduce. His funnier character would often steal the show but left many of us wondering in what universe could he and Cassidy possibly pass as brothers?

It was hard enough for me to get  past the idea that the very young-looking Shirley Jones, who was only five or six years into her 30s then, could be the mother to Keith Partridge.  Cassidy was 20 when the show started.

But, despite the producers’ apparent casting flubs (in my mind) and their initial plans to the contrary, it was Cassidy – not Jones – who became the show’s big star.  When producers realized that he actually could sing, David Cassidy was handed the lead mic and he never let it go, riding his voice and his teenage sex-symbolism to heart-throb status at a time when America apparently needed more of them in the post-Davy Jones era.

Meanwhile, as a young black kid spanning the ages of four to eight years old while all of this was happening around me, my only kiddie idols were the members of the Jackson 5.  I had their records, their lunch boxes, their afros.  No, they didn’t grace the teenybopper mags as much as Cassidy, Donny Osmond, Tony DeFranco (how many of you remember that name?) and later David’s half-brother Shaun Cassidy did, but Michael and Jermaine Jackson were who I identified with more, for reasons I’m sure you’ll understand.

So, upon hearing about David Cassidy’s recent hospitalization and then awaking to the news of his passing Wednesday morning, I wondered what I could contribute that hasn’t already been said by countless other journalists, bloggers and social media users who were likely more affected by or connected to the fallen pop star in their youths than I was.

But then I stopped kidding myself and recalled that I actually did have a Partridge Family connection.  I didn’t come by it like so many others did, but it was a connection nonetheless.

The story goes like this.  Sometime around 1971 or ‘72, while living in Germany on a U.S. military base, my mother took me to the post exchange where she would occasionally buy me records.  Outside of the Jackson 5, most of the music was of her choosing.  I would occasionally get to pick, but my choices were typically some kiddie record by Burl Ives, a “Sesame Street” album, or an animated Disney movie soundtrack from the 1950s or ‘60s.

During one of those store visits, I discovered a sales rack full of “oldies” or cut-out singles; you know the promotion-only copies of songs that had been serviced only to radio stations and were hits just a year or so earlier, or they were more current duds, but were now being put out to pasture in packages of three or four singles for less than fifty cents or a dollar.  These “for promotion only” copies were distinguished by the little pen-sized hole that was punched through them (on the labels) to separate them from those that had been made commercially available before.

For some reason, only the Bell Records label was participating in this particular promotion, so all the songs were by their artists.

Knowing how much of a music lover I was, my mother didn’t offer much resistance when I asked her to buy me two or three of these multi-packs of hits, especially given the apparent bargain we were getting.  So off I went and picked up about eight or nine singles on the Bell label for roughly $2 or $3.

I picked 45s from the acts with whom I was most familiar at the time: The 5th Dimension (because my mom had their albums and played them so much) and The Partridge Family.  One 45 I loved in particular was “The Declaration” by The 5th Dimension, but that’s a different story for a different day.

Four of the remaining 45s were from the Partridges.

The singles I had weren’t the group’s most popular, but they were moderate hits.  My stack included “I’ll Meet You Halfway,” (the only top-10 hit in the bunch), “It’s One Of Those Nights (Yes Love),” “Am I Losing You,” and “Breaking Up Is Hard To Do.”  There was no “I Think I Love You” or “Doesn’t Somebody Want To Be Wanted” anywhere in sight.

And because at that age I didn’t discern between A- and B-sides, I played both sides of the 45s with equal enthusiasm.  “Morning Rider on the Road” got equal play with its flip side “I’ll Meet You Halfway.”  I spun “If You Ever Go” far more times than its Side A, “Am I losing You,” simply because I liked “Go” better.

The Partridges’ version of “Breaking Up Is Hard To Do” was my introduction to that song (I had never even heard of Neil Sedaka until years later).  But the flip side of their single, “I’m Here, You’re Here,” was as much a hit on my little portable kiddie record player as “Breaking Up” was.

I may not have understood the whole teen heart-throb thing with David Cassidy back then, but I loved his and the group’s music, as shown by the incessant play their singles received when I was six and seven.  In fact, one could argue that I was a bigger fan of the Partridge Family than most because I was able to appreciate the deeper album cuts and B-sides while everyone else was rocking radio hits like “I Think I Love You,” “I Woke Up In Love This Morning” and “Cherish” (Cassidy’s first solo hit single).

I mean think about it, how many of you even know the words to “Morning Rider On The Road” or “If You Ever Go”?

Well, eventually I grew out of the little kiddie record player and the Partridge Family singles.  I discovered a wider palette of music as we all do when we get older.

I also discovered the Billboard charts and learned that the Partridge Family earned their only No. 1 hit, “I Think I Love You,” by knocking the Jackson 5’s “I’ll Be There” from the top of the Hot 100 on November 21, 1970.  (Oh, the symbolism there.)

Despite their many chart hits afterwards, “I Think I Love You” was clearly the song everyone associated with Cassidy, and he never grew tired of singing it.  On a recent airing of a David Cassidy show on Sirius XM, he acknowledged how much he loved the song and that he would likely be singing it until he breathed his last.

Forty-seven years to the day of that lone No. 1 pop hit was the day David Cassidy took that last breath.  But his music and his legacy will live on.  Heck, he’s probably up there somewhere singing “I Think I Love You” as you read this.

I know the song has been in my head a few (ahem!) times this week.

R.I.P. David Cassidy… and thanks for the musical memories from my youth!

PS: On the drive home for Thanksgiving I had the chance to listen to Sirius XM’s re-airing of the “David Cassidy Shuffle,” a program featuring the singer introducing and playing some of his all-time favorite music from the ‘70s (and one each from the ‘60s and ‘00s).  I found his taste to be interesting to say the least.  He played, in order: