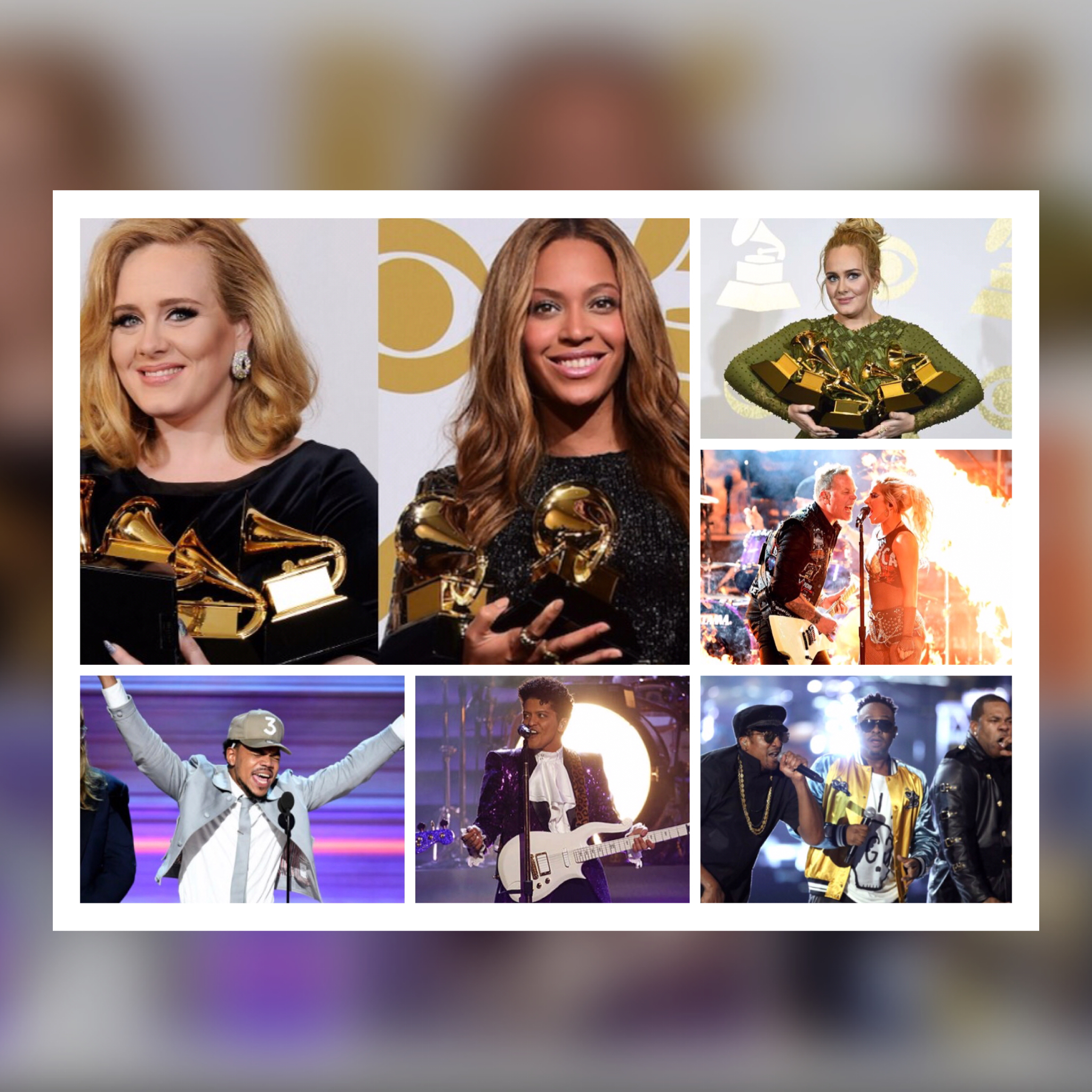 The win part?  That an album like hers – complete with messages celebrating blackness and womanhood and purportedly giving listeners privileged insight into real-life marital issues – was even up for nine Grammys, including the top three awards of Album, Record and Song of the Year (the latter two for its lead-off single, “Formation”).

And by the end of the night, Lemonade was perhaps the night’s biggest upset loser – yielding all three of the top prizes to Adele’s 25 and its behemoth single, “Hello.”  It marked the second year in a row that a critically acclaimed, provocative work of art with pro-black themes largely inspired by today’s news headlines was relegated to second (or even lower?) place by a pop album from the year’s favorite it-girl.

In 2016, everybody’s friend Taylor Swift beat out Kendrick Lamar’s To Pimp A Butterfly, itself a BLM-like statement in social relevance that railed against social injustice and institutional discrimination based on race.

Whether or not Swift’s 1989 or Adele’s 25 were good albums is not at issue here.  The fact that both marked the second Album of the Year awards for each artist (accounting for four of this decade’s eight winners) is a powerful statement, however.  Adele’s previous project 21 – arguably a better album than her latest one – won Album of the Year in 2012, while Swift’s Fearless beat out Beyoncé’s I Am…Sasha Fierce (and others) in 2010.

Beyoncé also lost the award in 2015, when alternative rock artist Beck’s left-field winner Morning Phase took the top prize over her self-titled fifth album, which leaves one to wonder (as Adele so emphatically – and perhaps rhetorically – asked after last night’s ceremony) what does Beyoncé have to do to win the Grammys biggest award?

Is it enough that she’s been nominated 62 times and has 22 wins – she did take home Grammys for Best Urban Contemporary album and Best Music Video (“Formation”) last night – more than any woman besides Allison Krause?  Or does it take winning the Best Album award (something only 15 albums by women have done in the awards’ 59-year history) to validate her?

Clearly that isn’t the case.

Beyoncé has established herself as a megastar among stars who will likely get another chance at Grammy history with her next release.

But what is also clear is that Lemonade isn’t for everyone – particularly the brown-sugar-sweetened brand that Beyoncé was pushing with her magnum opus album of that name.  Grammy voters still aren’t ready, preferring still to keep it safe with more accessible pop music and torch-song fare.

That’s just one of the five things we learned at this year’s Grammys.  The other four?

2. Bruno Mars is likely the funkiest live performer this side of 2010 who’s still breathing.

Who else could have lined up alongside former Prince protégés The Time (with Morris Day and Jerome Benton) and pull off a spot-on Prince tribute with a rocking rendition of the late Purple One’s “Let’s Go Crazy.”  Mars’ performance – with the singer decked out in a glittery purple dinner jacket, white lace scarf and eye-liner reminiscent of Prince’s 1984 glory – was near perfection and had people dancing in the aisles.

Mars’ recent top-10 single, “24K Magic” may not have matched the success of his 2015 juggernaut “Uptown Funk,” but he likely guaranteed a few sold-out concert performances for his upcoming tour with last night’s Grammy performances (he also sang his latest single “That’s What I Like” earlier in the show).

3. Redemption is sometimes the best award, especially when it comes in triplicate form.

Aside from winning the Grammys’ three biggest awards, Adele was on a bit of a redemption tour with her two performances of the night.  She opened the show with “Hello,” and performed it admirably. She likely felt she had to be perfect, after technical glitches marred her live Grammy performance a year earlier.

You see, artists of Adele’s caliber – those whose voice is their most powerful instrument – can’t go out like she did in 2016, especially on music’s biggest night with tens of millions watching on TV and many more ready to stream online the YouTube-ready moment almost as soon as it’s created.

So it stood to reason that, when her second performance of the night – a tribute to the late George Michael – began on a sour note midway through the ceremony, Adele was having none of it.  She promptly stopped the performance, uttered an expletive (something she’s no stranger to) and had producers and the Grammy orchestra start over from the beginning.

A very good – if not so memorable – slowed-down arrangement of Michael’s 1996 dance hit “Fastlove.”  The song choice was a dubious one given some of the more suitable – and Adele-ready – torchy material in the late singer’s catalog.  And yes, she did finally pull it off, but the spectacle of it all – and the immediately conjured up remembrance of last year’s bomb – begged the question, is Adele trying too hard to live up to the hype that’s been created around her voice, instead of just relaxing and enjoying the stage when she’s on it?

Or could it be that she’s a slight bit overrated and the world is slowly beginning to find that out?

4. A Tribe Called Quest is Still Relevant… and They’re Pissed Off.

In what arguably was the night’s most political performance, ATCQ brought down the house with a combined tribute/protest piece that simultaneously paid homage to fallen Tribe member Malik “Phife Dawg” Taylor and gave commentary about the current occupant of the White House.

They started the set with their 1993 classic “Award Tour” and continued with “We The People” from their latest album, last year’s chart-topper We Got It From Here… Thank You 4 Your Service.  Along with newcomer Anderson Paak, for the latter, they were joined on stage by fellow ’90s rap icon, the bulked-up Busta Rhymes, whose very direct references to “Agent Orange” were unmistakable in their pointedness.  But it was who these rappers were later joined by that provided perhaps the greatest form of protest in Grammy history.

Forget needing curse words or half-naked bodies to get your point across.  The rappers simply ripped off the muzzles and came hard by spitting gritty rhymes.  They then capped off the performance by spreading their message of inclusion to a very receptive audience and bringing onstage a parade of people from various backgrounds – most noticeably those of apparent Muslim faith.

It was a clear and direct message to the current leader of the free world – whether he was listening or not – and one that was punctuated by group leader Q-Tip who drove the point home with a rousing chant of “resist! resist! resist! resist!” as the set ended.

In addition to Adele’s restart during the George Michael tribute, several Grammy moments demonstrated just how hard – and sometimes awkward – pulling off a live TV awards show can be.  For instance, Metallica lead-singer James Hetfield’s microphone initially didn’t work during the band’s joint performance with Lady Gaga, which wouldn’t have been so bad had Lady Gaga not been the only one mentioned by transgender celebrity Laverne Cox during the set’s introduction.

Best New Artist winner Chance the Rapper had both of his acceptance speeches truncated by the “cutoff” music, which itself wasn’t so unusual – that’s happened many times in awards show history.  What made it noteworthy on this night was that a certain superstar was given at least twice as much time to read a lengthy acceptance speech for her Lemonade Urban Contemporary Album win, with no such interruption.

Another notable cutoff happened when Adele’s acceptance speech for Song of the Year was interrupted by a cueing of Solange Knowles’ “Cranes In The Sky,” before Beyoncé’s little sister introduced A Tribe Called Quest as the next performers.  The sight of Adele and her cowriter, Greg Kurstin speaking into dead mics while the camera cut to Solange elicited a few boos in the audience.

However, it’s safe to say that Adele got the final word, when she won Record and Album of the Year less than an hour later.

And this time, the night’s big winner let her cowriter speak first, before taking back the mic and expressing her opinion about who she thought really should’ve been the big winner – at least for Album of the Year.

That person – Beyoncé – couldn’t hold back tears while Adele showered her and Lemonade with accolade after accolade (even acknowledging at one point how empowered her “black friends” now were as a result of the former Destiny’s Child leader).

And then, just like that, music’s biggest night ended.  But not before giving us another year of memorable musical performances, awards second-guessing and Facebook- and twitter-worthy moments to tide us over until next year’s event.

Maybe by then, the taste of this year’s soured lemonade won’t be so bitter. 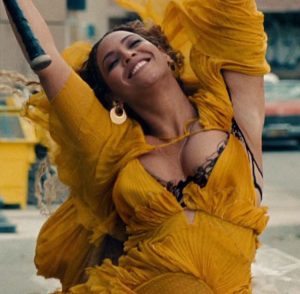