The Fixx played Chicagoland with irony, efficiency, and some holiday spirit; a review 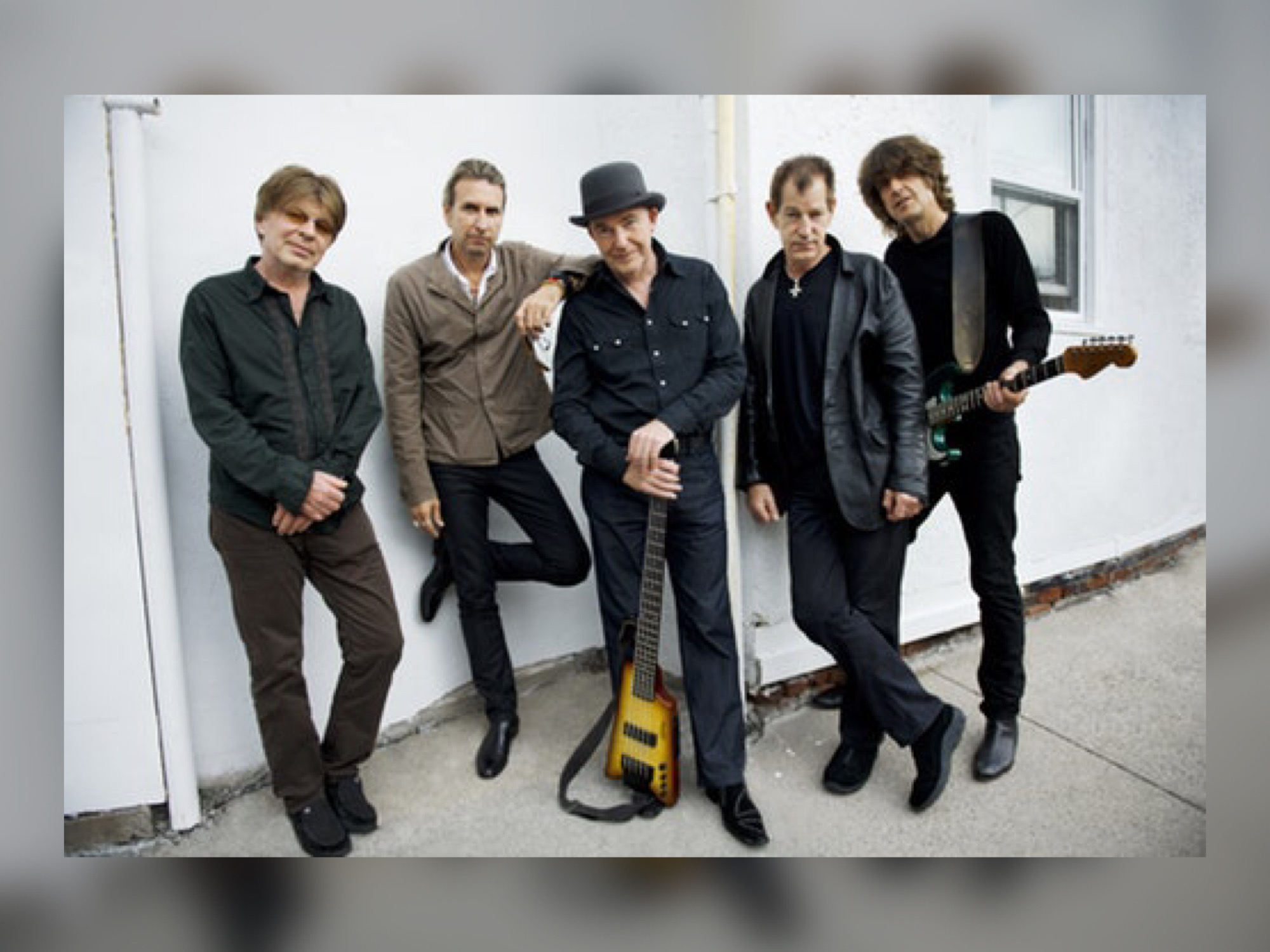 (December 21, 2019).  When many people think of the ‘80s new wave band The Fixx, they think of the edginess with which their songs were crafted.  They think of the smartly worded lyrics with hidden meanings that weren’t always easy to follow intuitively, but that fans knew were on some deep, sometimes political, sometimes socially conscious level.

They think of the videos – the band was an MTV staple during the network’s fledgling and peak years as a music video outlet.

The Fixx were radio-friendly, but hardly mainstream.  They were cutting-edge and innovative, but not necessarily transformative.  They were new wave, but they were a rock band at their core.

On Friday, about 900 Chicagoland fans were reminded just how much of a rock band The Fixx were and still are.  The British band performed a no-frills, 18-song set – including a cover of John Lennon’s Christmas classic “Happy Xmas (War is Over)” – at The Arcada Theatre in St. Charles, IL.

The song set was done very efficiently.  Rarely were there more than ten seconds that transpired between songs. The only banter by wiry original lead singer Cy Curnin was an occasional one- or two-liner to set up the next tune, which was often rapidly kicked off in true rock-and-roll fashion with a standard four-count by original drummer Adam Woods.

The band’s first sixteen songs, before the encore, were performed in just an hour and 15 minutes.

There were no embellishments – the large video screen behind the band was turned off for the entirety of their performance, ironic for a group that came of age during the MTV video era. The night’s only prop was a lit, mid-sized Christmas tree placed at the rear of the stage behind the musicians, in true Arcada Theatre fashion.

There were no elaborate productions, either – most songs were done in under four minutes, with the longest being “Deeper and Deeper,” the only Fixx song performed Friday night that wasn’t originally on a Fixx album.  The tune, which contained a nice guitar solo by original member Jamie West-Oram, originally appeared on the soundtrack to the 1984 movie Streets of Fire.

The solo likely gave West-Oram a bit of redemption after he had earlier experienced problems with his electric guitars, which required him to fumble with numerous switch-outs before he found one that would cooperate with his amplifier.

Leave it to bandmate Curnin to make light of that situation by waving his hands in magician-like fashion towards the amplifier, as if he was imploring it to cooperate, before quipping “looked like it was gonna be one of those nights,” to the crowd’s laughter after the problem resolved itself.

In addition to that very human exchange and the already-mentioned efficiencies above, there were other niceties that made this show great.

Among them was the fact that all five of the band’s classic lineup, including four original members, were present.  In addition to lead vocalist Curnin, drummer Woods, and guitarist West-Oram, there were original keyboardist Rupert Greenall and longtime bassist Dan K. Brown – the only member who wasn’t with the band when they started in 1979 as Portraits and later The Fix (with one x).  Brown, who joined in 1983, was with the group for most of their biggest hits, although he left in 1994 before returning for good in 2008.

Also nice was that the band spread its song selection across many different albums.  The Fixx poured through 17 of their songs that spanned eight different albums over 30 years (including the Streets of Fire soundtrack song), and no album got preferential treatment as none of them had more than three songs represented in the set.

Surprisingly, they only included two tracks from their biggest album, 1983’s Reach the Beach: the top-20 single “Saved By Zero” and their biggest hit “One Thing Leads to Another,” which peaked at No. 4 on the Billboard Hot 100 in the fall of 1983.

During “One Thing,” the crowd immediately rose to its feet and joined Curnin and Co. in a singalong during the choruses and the quirky, complexly layered bridge, while leaving the song’s verses to Curnin, who is likely still the only person who can sing the song straight through without reading a lyric sheet.

Speaking of Curnin, it’s clear he’s been taking good care of himself the past 30-plus years.  He (and his four bandmates, for that matter) appeared to be in great physical shape. His exaggerated hand and arm gesturing haven’t changed a bit from the videos we came to love back in the day.  In fact, those gestures appeared to be even more animated Friday night.

Another crowd-pleasing tune was “Red Skies,” the apocalyptic, MTV classic from the band’s first album as The Fixx, 1982’s Shuttered Room.  Again the audience joined in as Curnin delivered the familiar refrain “Oh, oh…whoa, oh, oh, oh-oh-oh-oh-oh” during the choruses.

It was that singalong that seemed to confirm my long-held theory that I was among the many Fixx fans who still couldn’t recite their complex songs’ verses verbatim, but who could belt their choruses with the best of them.  The Fixx is just one of those bands whose chords, melodies and beats often carried the day while their transcendent lyrics were incidental – at least, that is, until those hooky choruses and refrains took you to another, less daunting place altogether.

Other classic ‘80s tunes falling in that category, which were performed on this night, included “Stand or Fall” and two personal faves “Are We Ourselves” and “Secret Separation,” the band’s last two top-20 hits here in America.

Seventeen of the 18 songs the band performed were recorded before 2000.  The set’s lone exception was “Shaman,” an ethereal sounding track from their 2012 (and most recent) album Beautiful Friction.

Towards the end of the show, after the band performed “Red Skies,” they exited stage left before returning for the encore to sing “Do What You Can (Peace on Earth),” a hidden track on their 1986 Walkabout album, followed by the cover of John Lennon’s Christmas classic, which again prompted a singalong by the audience of mostly 50-something year-olds, myself and my friends included.

For that last number, The Fixx were joined on stage by the opening act – fellow Brit Royston Langdon, who once fronted the ‘90s rock band Spacehog.  Before The Fixx had taken the stage, Langdon performed six tracks with just his acoustic guitar, including a slowed-down version of Spacehog’s biggest hit, “In the Meantime” and a cover of the late David Bowie’s “Ashes to Ashes.”

I had a premonition that Langdon – who spoke more during his 30-minute set than the headliners did during their 90-minute one – would be back on stage to join The Fixx, whom he had cited as one of his influences.  That he did it during the finale of “Happy Xmas” seemed fitting for the festive holiday occasion, particularly when the whole ensemble of musicians were joined onstage by a jolly Santa Claus, who proceeded to throw commemorative t-shirts out to the audience as gifts while the band played.

And then, just like that, the show was over. In just 90 minutes, we got our “Fixx” of one of the ‘80s most innovative, most instantly recognizable bands of the decade.

Overall, The Fixx gave a great show with performances that stayed true to the original songs, which is always refreshing…especially for a band more than three decades past its hit-making days.  The Fixx took us back to a much simpler time and place where, as teenagers, it seemed that music and videos were all that really mattered in life.

Of course, their songs may have included political commentary on the things that were wrong in the world – even back then.  And some of those issues are playing out even more today than they were when the songs were recorded.

But this kid didn’t dwell on those messages and those details in the early-to-mid 1980s, particularly when it involved The Fixx.  Because, with them, it really was the music and the videos that mattered most, and for 90 minutes or so, we didn’t have to think about all the bad news that’s happening around us now.

Thanks to The Fixx for bringing back those memories on Friday in the Chicagoland area. If you haven’t seen them and they’re coming to a venue near you, make it a point to check them out.

You can also register for free to receive notifications of future articles by visiting the home page (scroll up to the top).