35 Years Ago: This MJ Video Changed Music Videos Forever… And It Wasn’t “Thriller.” 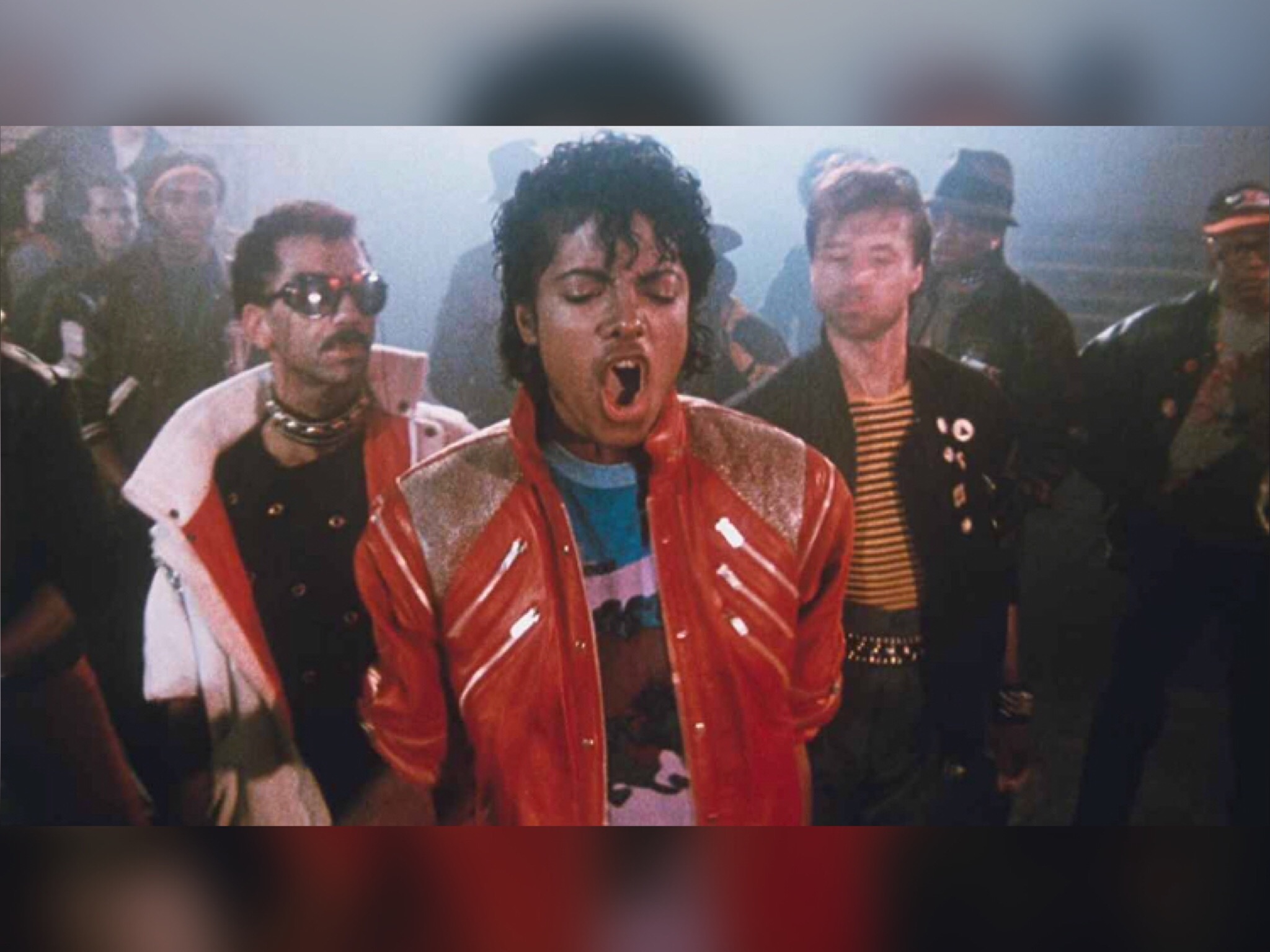 On May 14, 1983 – thirty-five years ago this week – the third single from Michael Jackson’s landmark Thriller album spent its last of three weeks at No. 1 on Billboard’s Hot 100 singles chart before descending and eventually exiting the chart as the song’s immense popularity naturally waned.

But the legacy created by that song, “Beat It” – and, more specifically, its music video – is one that has far outlasted its chart performance and is to this day owed a great debt by artists everywhere who’ve used its simple premise in music videos ever since: the syncopated dance routine as a unifying force.

Today, djrobblog celebrates the 35th anniversary of MJ’s legendary “Beat It” video and how it revolutionized the way music videos were made then and to a large extent have been made ever since.

In February 1983, “Beat It” was released as single No. 3 from Thriller, hot on the heels of the second single, “Billie Jean,” which itself was still climbing the charts when Epic decided it wanted two of Jackson’s songs scaling the charts simultaneously.  Nowadays, that may not seem like a big deal as an artist having simultaneous hits is much more common in the world of streaming and downloads.   But back then, it was almost unheard of for a label’s promotional department to work two vinyl 45s only five weeks apart.

The way Epic saw things, if “Billie Jean” was to become MJ’s signature bass-heavy dance/funk number from Thriller, then “Beat It” would become its guitar-driven, dance/rock counterpart.  Both songs would get the video treatment, something their predecessor “The Girl Is Mine” hadn’t.  And both songs would ultimately be marketed to MTV.  They weren’t the first videos by a black artist ever to air there, but they were the first to gain heavy rotation thanks to some significant arm-twisting by the top brass at CBS Records (now Sony Music), the parent company to Jackson’s Epic label.

For “Beat It,” the song whose lyrics were an anti-machismo lecturing by MJ on the virtues of staying out of harm’s way in the face of an unnecessary fight, Jackson and company wanted a video that reflected the same theme.  They employed Bob Giraldi, a well-known director, to write and direct the short film, which featured two rival gangs coming to blows in a turf war that only Michael Jackson (and his dancing) could stop.

The dancing is where things got interesting.  Giraldi signed late choreographer Michael Peters to create the ending dance sequence that would become synonymous with “Beat It.”  Peters and fellow dancer/choreographer/director Vincent Patterson also represented the gang leaders who would ultimately come to blows in a mock knife-wielding fight, before ending their beef and solving their problems through dancing, thanks to Jackson’s intervention.

It was that dance sequence during the video’s final one minute and one second that revolutionized music videos forever.

Before then, syncopated dance moves featuring the principle artist had hardly been used in promotional videos.  The music video was still a relatively new mass marketing tool in ‘83 and they were usually limited in concept to concert performance clips, short stories, weird dream sequences or anything else the artists or their management felt would capture the essence of the titular song.

But unified dancing akin to that seen in the movie West Side Story in a music video?  That was unheard of.

So when Giraldi brought together Jackson, Peters, Patterson, a host of other professional dancers and dozens of real L.A. gang members (from the Bloods and Crips) to create the final 1:01 of “Beat It,” the end result took MTV, America and the world by storm.  We knew Jackson could dance – we’d seen him do it for 13 years before then.  But Jackson as the moderator and neutralizing force between two rival gangs brought together by the sheer act of dancing?

Perhaps it was the utter unbelievability of such a scenario that was so fascinating.

Or maybe it was the combination of Jackson’s fluid dance moves and Peters’ fancy choreography featuring an alternating sequence of hand-shuffling, arm-stretching, leg-lifting, and nifty body-turning – performed by the unlikeliest of characters – that had us so hooked.

And who could forget those crafty dance moves MJ made around the pool table (in the emptied pool hall where one of the rival gangs had previously assembled) before he arrives in the streets – mysteriously emerging from the rafters of an attic full of storage boxes – to save the day in the end.

Oh and then there was that famous Jackson kick.  A MJ video wasn’t a MJ video without his signature leg-kick move…and “Beat It” had at least two of them.

The video would up in MTV’s heavy rotation for months as well as BET’s Video Soul.  It also became the first ever to be aired on NBC’s Friday Night Videos, which launched that July as the song was already descending the charts.

What’s more, the “Beat It” video set the precedent for what has almost become standard practice in music videos in the 35 years since.  Michael Jackson made the syncopated dance sequence a personal trademark with subsequent videos, including his own iconic “Thriller” short film later that year as well as videos from his follow-up Bad album, all of which might not have existed had it not been for “Beat It.”

Artists like Pat Benatar (“Love Is A Battlefield,” also directed by Giraldi), Lionel Richie (“Running With The Night,” also Giraldi), Madonna (“Lucky Star” and many others), Janet Jackson (many videos) soon followed suit.  Eventually artists for generations to follow (Britney Spears, Chris Brown, Beyoncé, just to name a few) would famously use the choreographed dance technique as a central part of their videos.

The “Beat It” video wound up being one of the most award-winning of all time and certainly up to that point. It won American Music Awards for Favorite Soul Video and Favorite Pop/Rock Video, Rolling Stone readers and critics polls as the No. 1 video, and many Billboard Video Awards including Best Overall Video Clip, Best Choreography and Best Use of Video to Enhance a Song.

Not that the song “Beat It” needed any enhancement.  Jackson’s catchy, rock-oriented anthem is iconic for more reasons than the video. The song, with contributions from members of the then-popular band Toto (Jeff Porcaro on drums and Steve Lukather on rhythm guitars), emerged from the shadows of “Billie Jean” to become its own massive crossover hit.

Not only did it top the pop charts (for three weeks), but “Beat It” topped the Billboard R&B charts afterwards and, thanks to the Jackson and Quincy Jones coup of securing legendary rock god Eddie Van Halen to do the guitar solo during the song’s bridge, also peaked in the top 15 of the Billboard Rock Tracks chart.

Ultimately, the popularity of “Beat It” helped solidify Thriller as the biggest album of all time and transform Michael Jackson from being an American superstar to an international icon.

“Beat It” – the video – may not be appreciated as much now as it was back in 1983.  Some have called its premise of dancing to prevent gang-fighting a bit naïve and cringeworthy, something that would only work in Jackson’s make-believe world where all of its problems could be solved by such things.

But without “Beat It,” who knows, we might be seeing music videos totally differently all these years later.

Here’s a reminder of what it was like then.

3 thoughts on “35 Years Ago: This MJ Video Changed Music Videos Forever… And It Wasn’t “Thriller.””