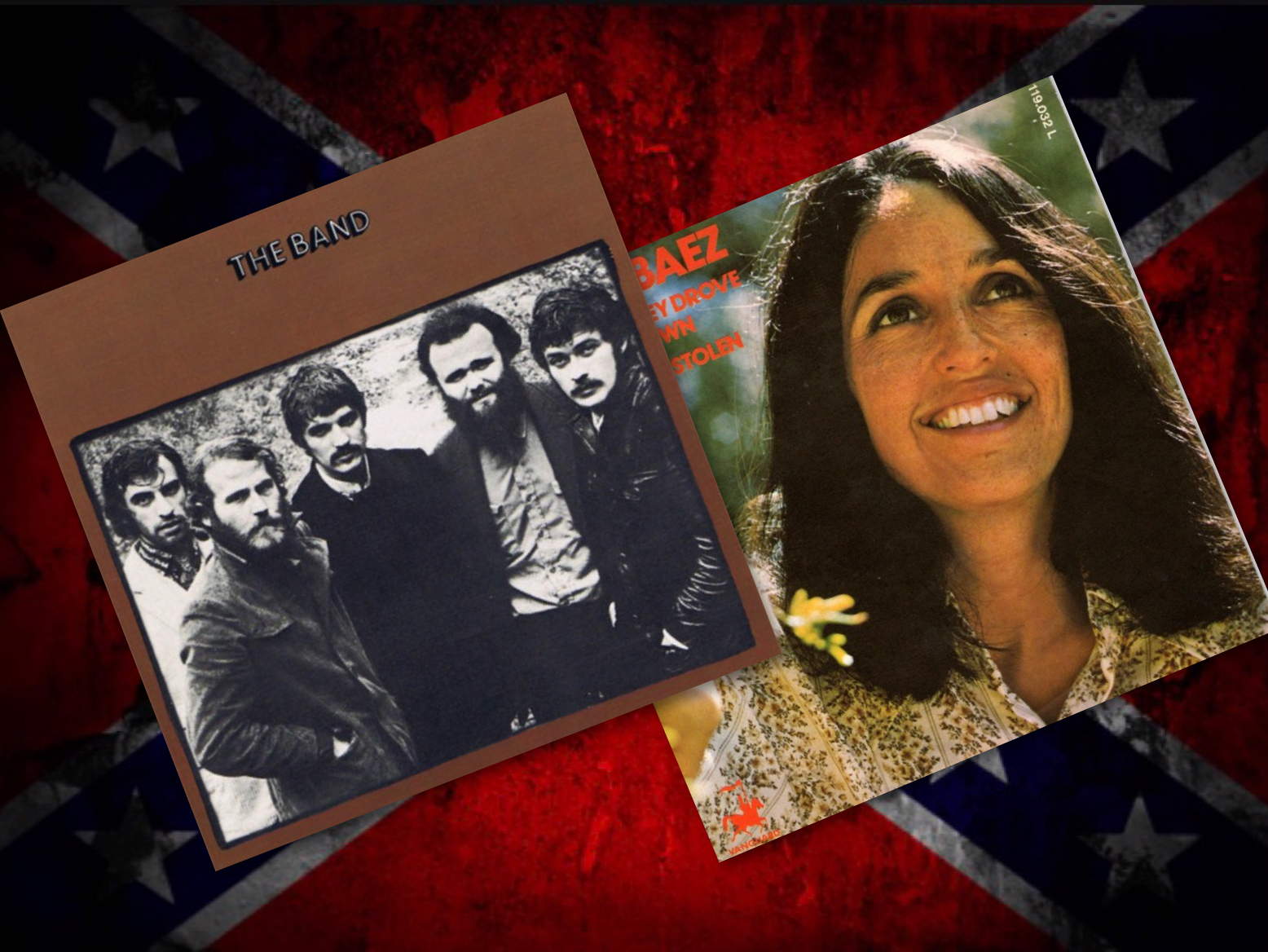 (August 13, 2017). As a young African-American child growing up around all types of music, I loved the song “The Night They Drove Old Dixie Down,” particularly the pop cover by legendary folk singer Joan Baez.

What kid under the age of eight at the time didn’t?

After all, the 1971 hit was vivid in its easily understandable lyrics, had a great sing-along chorus, was very melodic and it pervaded American pop radio… basically all the makings of a child’s piece of irresistible pop music candy.

What I didn’t know then was all that went into the song’s making and what the tune meant then (and now) to so many people.

Regarding Joan Baez, for starters, I didn’t know at the time what a “folk singer” was or that she had marched with the likes of Dr. Martin Luther King, Jr., that she had protested the Vietnam War, or that she championed women’s issues and gay rights when it wasn’t popular to do so.

I didn’t even know that her version of the song wasn’t the first, but a cover of a tune by a group called “The Band,” a popular Canadian-American roots-rock group from the late ’60s (“The Weight,” “Up On Cripple Creek”) whom I only came to know – and admire – several years after their popularity had waned.

I certainly didn’t know at the age of five or six that the song romanticized the wrong side of America’s greatest domestic war and was a semi-fictional tale told from the perspective of a poor white southerner named Virgil Caine who was crushed in defeat during the last days of that war.  I could follow the song’s lyrics, but their historical significance was too much for a five-year-old mind to comprehend.

Only later did I learn those things, or that The Band’s version made specific reference to a real-life Union Cavalry Officer named George Stoneman (later a California governor), and that the “Danville Train” in the song’s first verse refers to a train that actually carried Confederate army supplies to soldiers in Petersburg, Virginia, which happens to be my hometown.

I did not know that Baez’s version curiously omitted the reference to the Union leader, a move that some conspiracy theorists might be inclined to think was motivated by ideological reasons.  Truth is, she had never seen a lyric sheet of the original and recorded the song as she’d misheard it, “so much cavalry came” vs. “Stoneman’s cavalry came,” in describing that Danville rail line’s destruction.

I also didn’t know – but was surely geeked in discovering – that Joan Baez, whose version of “The Night They Drove Old Dixie Down” was a top-3 pop hit at the end of 1971 and also the most commercially successful, was of half-Mexican heritage.  Yes, her father was from the same Mexico that America (at least those who support the current administration) now seeks to separate itself from via a wall erected at our southern border.

Yet Baez is herself such a great symbol of Americana, a Grammy Lifetime Achievement-winning singer/songwriter who was inducted into our Rock and Roll Hall of Fame just four months ago.

But the ironies continue.

Only after researching it did I learn that The Band recorded their original version of this slice of Old South romanticism in the liberal state of California – in the home of the late Sammy Davis, Jr., a black man who also happened to be…

Yet it was Robertson’s curiosity – sparked after hearing for the first time the term “the South will rise again” – that caused him to research the American Civil War and create what is largely heralded as its most vivid tale in rock and roll history.  Music experts have praised “The Night They Drove Old Dixie Down” as something so authentic sounding that it had to have been “handed down from father to son straight from that winter of 1865 to today.”

To that end, as a young black kid singing along to lyrics like “Virgil, quick, come see, there goes the Robert E. Lee,” I had no clue who this Lee fella was or why he – or it in this case – was something special to see.

Or that his namesake was and continues to be such an important symbol for southern whites, some of whom are still inconsolable after being more than 150 years removed from what they viewed as a most heroic effort on the part of the Confederacy and an unfair fight lodged by the Union; a war lost to the North only because of the Confederacy’s considerable deficiencies in size and industrial strength.

In that way, the song has become associated with the ideology of the “Lost Cause,” a set of beliefs that include the revisionist notion that black slavery was not at the center of the Civil War – a theme that helped reunify northern and southern whites in the war’s immediate aftermath (and has continued to since).  In other words, this ideology purports to remove all guilt or blame associated with this country’s past.

And now here we are in August 2017, 152 years removed from the American Civil War and 48 years after The Band’s original version of “The Night They Drove Old Dixie Down,” in the wake of one of this country’s ugliest episodes of civil unrest in recent memory.  The events in Charlottesville, Virginia on August 12 resulted in a lost life and an ugly scar that will remain a part of that city’s legacy, mostly because a group of people motivated by hate want a return to the old ways, as symbolized by a statue of Robert E. Lee himself, which the city’s leaders ultimately want removed.

In essence, as clearly stated by one of the so-named “alt-right’s” leaders at Saturday’s violent protests, that group and its followers are carrying out the ideologies of a race-separating regime that promises to “Make America Great Again” and give them “their country back.”

That group holds on to the mantra that the “South will rise again” and that Dixie was never rightfully driven down in the first place.  They embrace the same type of self-victimization about the Civil War that places the blame for what happened in Charlottesville on anything other than the hate and divisiveness that was at its core and instigated by the group itself.

But the stories of diversity that surround the song “The Night They Drove Old Dixie Down” are permanently linked to the recording; and that diversity runs so deep, it would make the most diehard followers of the alt-right movement disown it if they knew any better.

Certainly, the irony of this historic song’s crucial ties to the Jewish-Canadian Mohawk Indian who wrote it, the half-Mexican/half-European folk singer/songwriter/civil rights female activist who popularized it, and the black Jewish man in whose home the original was recorded, has to be lost on those who’ve co-opted the song’s story as part of their ideology – particularly an ideology that suggests (rightly or wrongly) that the song is representative of a group of people who want to reestablish the “purity” of European white culture and its old ways of life.

It was certainly something I never fathomed at the age of five when it was a hit or in the years before I came to truly understand what and who the Confederacy and Robert E. Lee were.

But I definitely understand them now, even more so after the events in Charlottesville on August 12, 2017.

And yet there is still another bit of irony in all of this.

I actually still like the song – for many of the reasons that a five-year-old child would  – both The Band’s and Joan Baez’s versions. They are both pieces of pure art, beautiful art that uniquely captures a part of American history that still divides some of us to this day.

Yet, as much as I love it, maybe you just won’t hear me singing aloud to that infectious chorus when it comes on again.