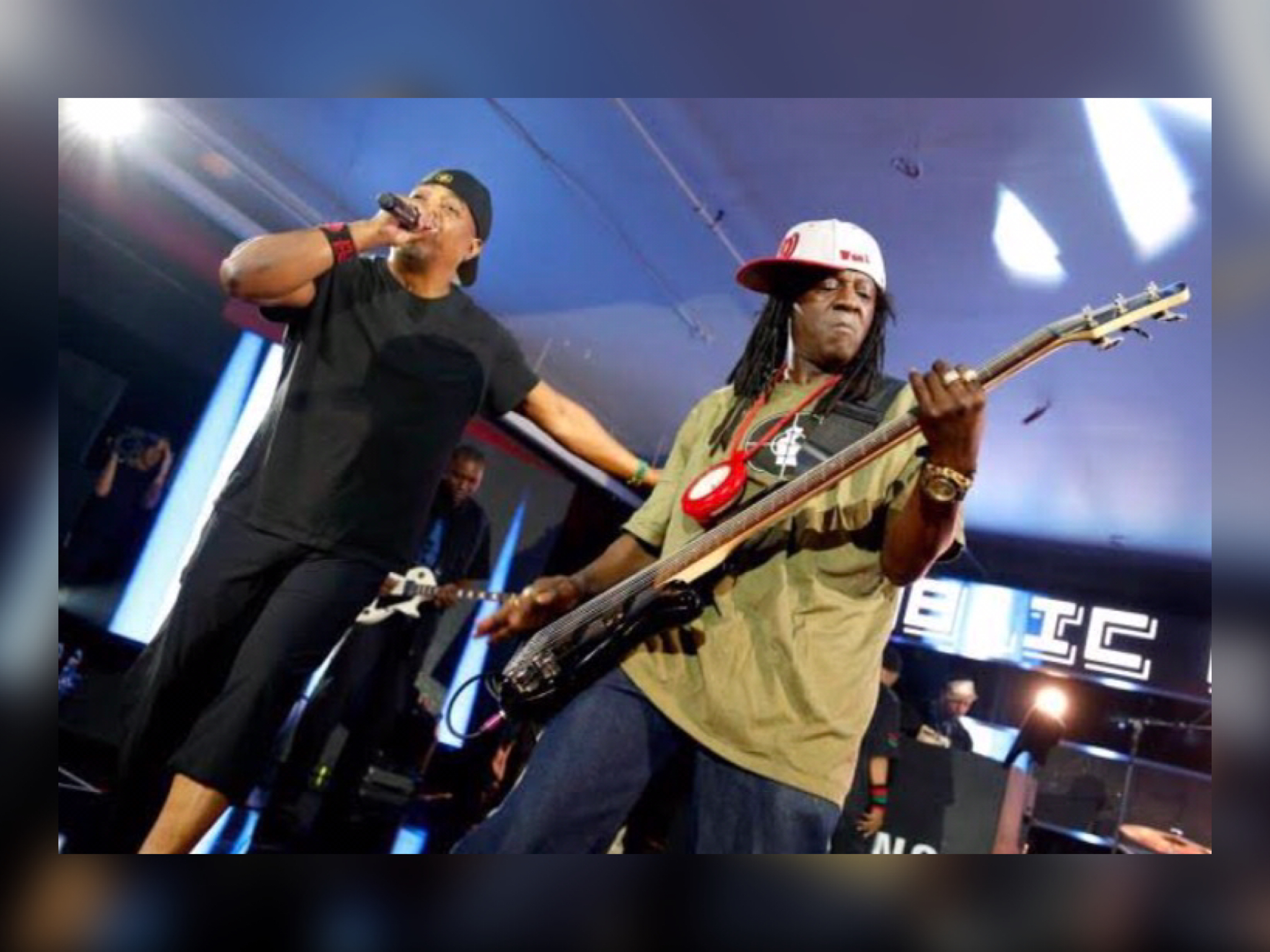 To be fair, they did keep it a secret, offering it as a surprise free download on the site Bandcamp (but seriously, who does that?!).

When a legendary Rock and Roll Hall of Fame group whose first album turned 30 earlier this year releases a brand new one in 2017, it should be cause for celebration, right?

After all, how many other Hall of Fame acts whose careers began that long ago are still releasing albums on a regular basis, i.e., every couple of years or so?

And when that RRHoF group is a black hip-hop act who was among the first of its genre to be included in music’s hallowed Hall, and that group still has its core membership, you’d think the music world would be in jubilee reveling in the moment.

At least, it should be.

But in 2017, the legendary hip-hop group Public Enemy, whose new album Nothing’s Quick in the Desert was released in late June and available as a free download on the group’s Bandcamp through July 4, is about as relevant today as other ’80s relics like the Rubik’s Cube or worse, those Cabbage Patch dolls.

As case in point, PE hasn’t reached the American album charts since 2006 and hasn’t placed in the top half of the Billboard 200 since 1994 (when Muse Sick-n-Hour Mess Age reached No. 14).

Given its limited availability and untraditional release structure, Nothing’s Quick will likely follow the path of the band’s recent albums and miss the Billboard charts altogether.

And that’s sad, especially considering how good the album is.

Radio certainly won’t play PE (although, admittedly, outside of “Fight The Power” and “Can’t Truss It,” it rarely ever did), the new album isn’t being carried on major streaming services (again, admittedly, by their own doing… I was only able to find the album on YouTube where it’s been uploaded by several users), and the group is, well… considered old by today’s standards. (And since I’m on a roll with admissions, so am I, lest I wouldn’t even be covering PE).

Most likely it’s that last fact – their age – that contributes to their near-forgotten status in today’s hip-hop universe.  The three longest-tenured (and principal) members of PE – Chuck D, Flava Flav and Professor Griff – are all north of their 55th birthdays.  Both Chuck D and Flav will be 60 before this decade is over.

Yet, they charge on with the same hard-hitting, confrontational and unapologetically progressive political messages that their music has always contained – and with no less power than they ever did.  In fact, they pull few punches when it comes to the ever-popular and most convenient punching bag that is POTUS #45.

The problem isn’t PE’s message – which is just as relevant today, if not more so – than it was in say, 1989.  It’s who’s delivering it – and the hip-hop and political landscape in which it’s now being played out.

Counterculture and rebellion – the two main tenets of PE’s vast music catalogue (including the current album) have always been a young man’s domain.  When Chuck D was spitting knowledge in the late 1980s and early ’90s – and forging his group’s Rock Hall of Fame career along the way – he was still approaching his 30s and the group’s hard-hitting themes were new to the mainstream.  America – and black American youth in particular – had never heard its plight spoken so directly and forcefully when PE first hit with classics like “Rebel Without a Pause,” “Don’t Believe the Hype” and “Fight the Power.”

Those vibes exist on the new album in songs like “Toxic,” where Chuck D. equates #45’s antics to “ballin’,” while average citizens (presumably poor white people included) suffer.  Another example of this is the song, “sPEak,” a rock and funk-infused call-to-arms for resistance against oppression and one of the album’s best tracks.

Yet, on Nothing’s Quick, when PE waxes political and rails against the current president, it’s from a perspective that no longer seems limited to a singularly oppressed race of people.  Trump’s America is one that equally offends many (including some of those whose votes he garnered, whether they know it or not).  For that reason, PE’s messages, which have already been voiced by others in many protests and resistance movements around the world, no longer seem groundbreaking.

Yet, while it’s clear that PE is not forging any new ground with Nothing’s Quick, whether it’s because their sermon is rehashed from ones they already delivered decades ago, or because there’s a new crop of rappers with whom today’s music consumers primarily identify that are singing similar tunes, PE’s method is still unique.

When Chuck D. says, “can a song save the world in this time of 45?” in the tune “Toxic,” you’d swear you’ve heard Kendrick Lamar, J. Cole or Chance the Rapper say something similar on their most recent albums.  But PE’s words come across grittier – no doubt helped by the musical styles they use throughout the album.

In fact, the major difference between PE and today’s hip-hop artists is their music.  Public Enemy’s rhymes are mostly delivered over rock and funk tracks – sometimes both in the same song – and old-school hip-hop drum beats, with the group’s DJ Lord scratching on the turntables.  There isn’t a trap beat among the 13 songs that make up Nothing’s Quick.

True to its Rock Hall of Fame inclusion (and with Chuck D’s and DJ Lord’s still-active liaison with members of Rage Against the Machine for the super hip-hop/rock group Profits of Rage), PE had become somewhat of a rock-rap hybrid itself.

Musically, that’s a blessing to older hip-hop heads (like myself) who’ve grown weary of the incessantly monotonous beats that inhabit the latest hits by today’s rap superstars like Future, Migos and other trap and mumble rap artists.

But sales-wise that will likely be a curse to PE (assuming the album is made more commercially available in the coming weeks).  Today’s kids want to party and bop their heads to every half-beat that punctuates today’s hip-pop, not be sonically tantalized by the stellar tempo changes that PE uses to great effect in songs like “Yesterday Man” or “Sells Like Teen’s Hear It.”

Speaking of those two songs, both those tunes acknowledge the PE guys’ old-man status.  Yet, while “Yesterday Man” serves as a reminder to the young cats that PE has been doing this since some of them were still in diapers (if they were even born), “Sells Like Teens Hear It” takes a more conciliatory approach – particularly to mumble rap – with the refrain: “I’m not that old-head who be side-line booing what my generation calls mumble, go to it.  Listen to it closer as you get near it, smells and sells like teens hear it.”

The message there being that older generation rappers were equally criticized by “adults” for the trendiness that had teenagers buying their records decades before.  And if one takes the time to really listen, there’s a nugget in there somewhere.  It’s a message that is consistent with what Chuck D. said in a trade press interview was the meaning behind the album’s title, with the “desert” representing the music industry and the notion that the industry is still thriving – it just needs redefining.

That being said, all in all Nothing’s Quick in the Desert offers nothing terribly new.  It still has the revolution-inciting tunes (“So Be It”), the Afrocentrism (“Exit Your Mind”) and socially conscious wake-up calls (the title track and many others).

But it’s nonetheless a great collection of new tracks from an old familiar RRHOF group who have just as much to say now as they did in 1987.

The only difference is that their audience, oddly enough, is much smaller today – despite their messages being more relevant now than they were 30 years ago…even if the group itself isn’t.

It must be due to their senior-citizen status, which in hip-hop and counterculture is a no-go.

Or maybe it’s because PE took themselves out of the corporate promotion game many moons ago.

How else could you explain that an outfit of Public Enemy’s caliber can release a new album and it go relatively unnoticed?

Best tracks on Nothing’s Quick in the Desert:

PS: Click the YouTube clip below to get a listen to the entire album, or go to YouTube where you can enjoy the album’s tracks individually.

One thought on “Public Enemy Released A New Album Last Week…And, Sadly, No One Noticed”