You didn’t have to know country music to know that Loretta Lynn (1932-2022) was an American icon: tribute 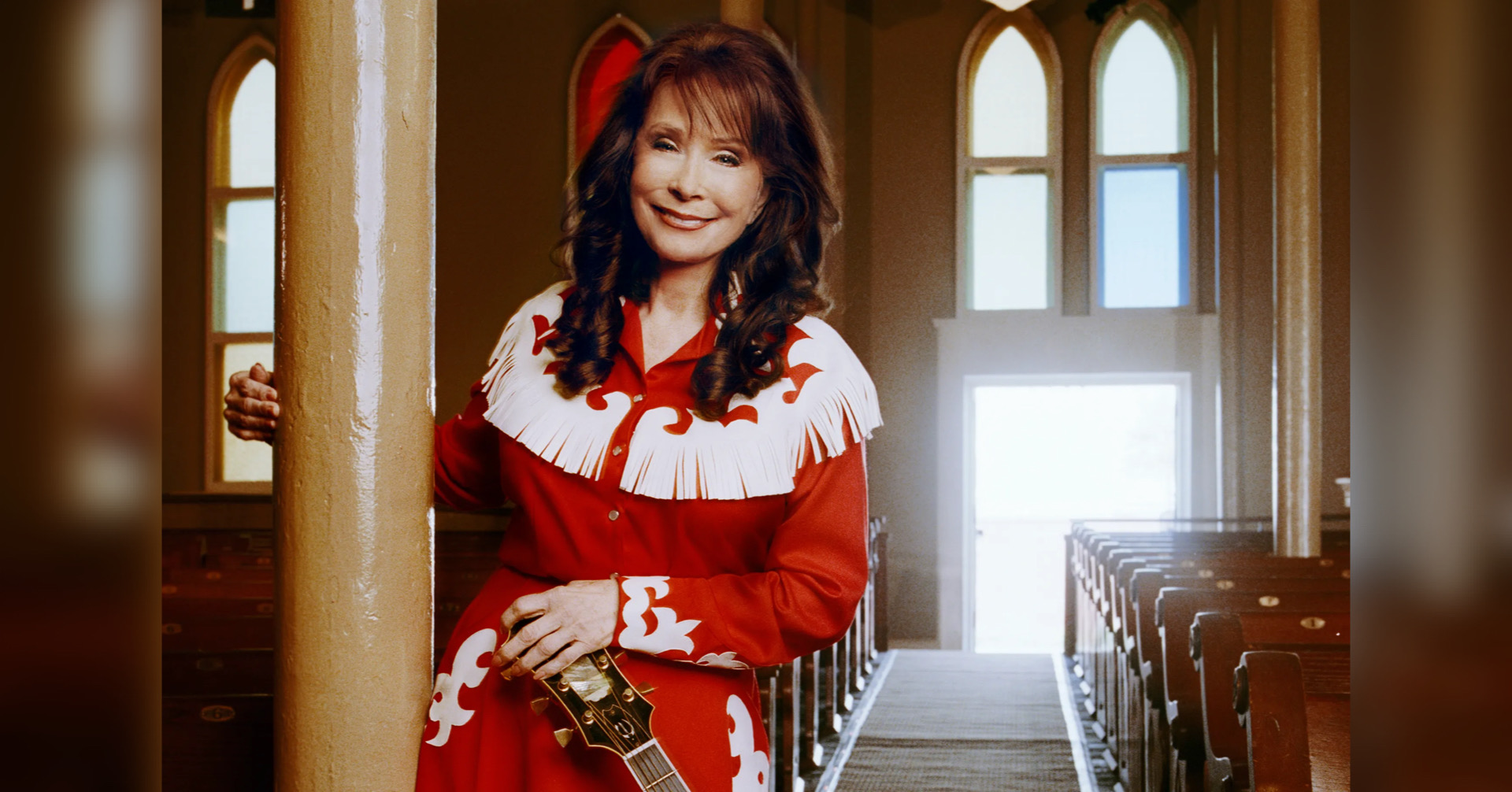 (October 7, 2022).  There are certain names in music that are just transcendental.

A kid born in 2002, for instance, knows that Elvis or the Beatles or Michael Jackson were legendary artists, once-in-a-lifetime figures whose work and accomplishments often precede them, even if that millennial didn’t grow up listening to those acts and doesn’t have the emotional connection to their music that people from previous generations do.

That was my musical relationship with Loretta Lynn, who died in her sleep Tuesday, October 4, (age 90) at her home in Hurricane Mills, Tennessee.

Loretta Lynn was not an artist whose songs I would necessarily seek out as I filled my normal musical palette, but she’s one whose influence on her genre and on the many musicians who came after her was well known nonetheless, as was her incredible life story.

Loretta Lynn—born Loretta Webb, the second of eight kids who would bare six children of her own, including four before the age of 20.

Loretta Lynn—a country icon whose music I was introduced to not by her own recordings, but by the 1980 biopic “Coal Miner’s Daughter,” in which actress Sissy Spacek memorably portrayed (and sang songs by) the then-living legend.

Loretta Lynn—a tried-and-true country singer who never had a song climb any higher than No. 70 on the pop charts (and only had three such chart entries), but who chose to stay true to her honky tonk roots. That career-long decision resulted in dozens of country chart entries, including eleven solo No. 1s, plus five more with late singer Conway Twitty.

Loretta Lynn—big sister to an artist I was admittedly more familiar with and whose music I knew much more readily.

That younger sister was fellow country singer Crystal Gayle, who was nearly 19 years Lynn’s junior and who was already an auntie to four of Loretta’s children before she turned two.  Gayle had three pop top-20 crossover hits (which I knew and loved) before I had ever heard one song by her big sister.

But I knew the association between the two.    Everyone did.  It was the burden that Crystal had to bear being the younger sister to someone as quintessential to country music and, by extension, music in general as Loretta Lynn was.  It was no different than pop superstar Janet Jackson having to work hard to escape the inevitable shadow of her iconic big brother Michael.

But for this admitted non-country music listener (unless it was crossing over to pop), the Lynn-Gayle table was somewhat turned.  For yours truly, little sis Crystal Gayle was my point of reference, and Loretta Lynn was just her big sister.

By the time I finally explored some of Lynn’s music—after the movie “Coal Miner’s Daughter” earned Spacek a well-deserved Oscar and I was introduced to Lynn’s incredible life story—I began to appreciate her legacy and what she accomplished, particularly in the male-dominated world of country music where women were often relegated to singing about their broken hearts and brown eyes being made to turn blue (at least back then) by wrongdoing men.

Lynn, however, took on a different role in her songs, many of which she wrote herself.  She remained the doting mother and dutiful wife, but she was also defiant and snappy, often laying down ground rules about what she would and would not tolerate.

You’d often hear her singing about the common topic of a man’s absent or philandering ways or the floozies that would lure him, but it was accompanied with a scrappiness you didn’t hear in other women’s songs.

For instance, in the early 1966 hit, “You Ain’t Woman Enough (To Take My Man),” Lynn practically dared her competition to try, asserting to her challenger that women like her were “a dime a dozen” and that it would be over Lynn’s dead body before that woman would get her man.

What a contrast to later cheatin’ songs by fellow icons such as Dolly Parton’s “Jolene,” where Dolly practically begged the would-be home-wrecker not to take her man simply because she could.

Or to even sappier songs by younger sister Crystal who (twice) made hits about her brown eyes being made blue by a man who wasn’t doing right by her.

When Loretta Lynn recorded the scolding “Don’t Come Home a’ Drinkin’ (With Lovin’ On Your Mind),” also in 1966, it was the kind of female assertiveness not heard before in music—country or otherwise.  Other women lamented in song (and usually after the fact) about a man being out all night or coming home drunk with lipstick or perfume on his collar and expecting business as usual.

Lynn’s song made it clear that, where those boundaries may have been crossed before, they wouldn’t be anymore (or at least not this time).

The song in Loretta Lynn’s discography that stood out the most to this blogger—again discovered years after its popularity—was “One’s On The Way,” a No. 1 country hit in 1971 that inexplicably wasn’t marketed to pop radio.

That tune, written by noted children’s author and songwriter of massive hits by Johnny Cash and Dr. Hook, the late Shel Silverstein, was Lynn’s most clever—an ode to the motherhood she so lovingly embraced despite all of its thankless demands.

In the span of just two-and-a-half minutes, she managed to knock the glittery political social scene, elite Hollywood actresses, television’s unrealistically blissful “Newlywed Game,” her unhelpful bar-hopping husband, women’s libbers, and the future promise of “the pill”—all while staying home in middle-America Topeka and dutifully dealing with a dripping faucet, slamming screen doors, dirty floors and laundry, pesky flies, a barking dog and all those needy children—one (and prayerfully not two) of which was “on the way.”

By 1971, Lynn had six children of her own with husband “Doo” Lynn, to whom she was married for nearly 50 years, so she was certainly singing from experience.  But with “One’s On The Way” didn’t she make her unenviable plight sound fun?  Or at least tolerable?

There were other boundary-pushing hits as well.

That “pill” she lyrically pondered in “One’s On The Way” was fully embraced four years later in “The Pill,” her 1975 declaration of freedom from the perennial pregnancies she found herself experiencing while hubby was out “having all his fun.”

“The Pill,” co-written by Lynn, was another cleverly worded song, with our heroine of mothers shutting down her “overused incubator,” throwing away her maternity dress, and losing those doctor bills, all to finally be able to don a tight miniskirt and enjoy the fun part of what had previously resulted in her always having a bun in the oven. (“The feelin’ good comes easy now since I’ve got the pill.”)

“The Pill” wasn’t just another one of Lynn’s 16 No. 1 country hits.  It was the one that took her the highest on the pop chart—No. 70 in March 1975.  It was about as controversial a song as a female country singer would make at the time, and it earned a reluctant Lynn praise in liberal circles for highlighting the virtues of the birth control pill, the broader societal promise of which was just being realized around that time.

It was a planned pregnancy concept that might have gone against her otherwise conservative Christian values, which were well documented.

Perhaps it was those same values that kept her in a marriage that she acknowledged was tough from start to finish.  She had married Oliver “Doolittle” (a/k/a “Doo”) Lynn at age 15 and had four kids by the time she was 20.

“Doo,” who passed away in 1996, was instrumental to a career that saw Lynn release more than 86 albums (studio and compilation combined) over 60 years, with the last one—Still Woman Enough—released just last year.  That album reached No. 9 on Billboard’s country albums chart and No. 83 on the overall Billboard 200…not bad for a woman who was a year shy of her 90th birthday.

With that, she may have been the oldest woman to place an album in the top half of the Billboard 200 in its 55-year history, a milestone to go along with the many other accolades, including Grammy, Country Music Association and Academy of Country Music awards, not to mention her 60-year affiliation with the Grand Ole Opry and her 1988 induction into the Country Music Hall of Fame in Nashville.

Acknowledged as the most decorated woman in Billboard country chart history, Loretta Lynn didn’t need anymore accolades to solidify her position as one of the Queens of country music, if not the Queen.

Anyone worth their weight in musical appreciation didn’t need to know her immense catalog of music verbatim to understand and appreciate that royal status.

DJRob (he/him/his) is a freelance music blogger from somewhere on the East street Coast who covers R&B, hip-hop, pop and rock genres – plus lots of music news and current stuff!  You can follow him on Twitter at @djrobblog.