Won’t He? DJ Khaled’s ‘God Did’ boasts 7 of the 10 most prolific rappers alive, and a roster that has an insane 81 No. 1 albums, collectively 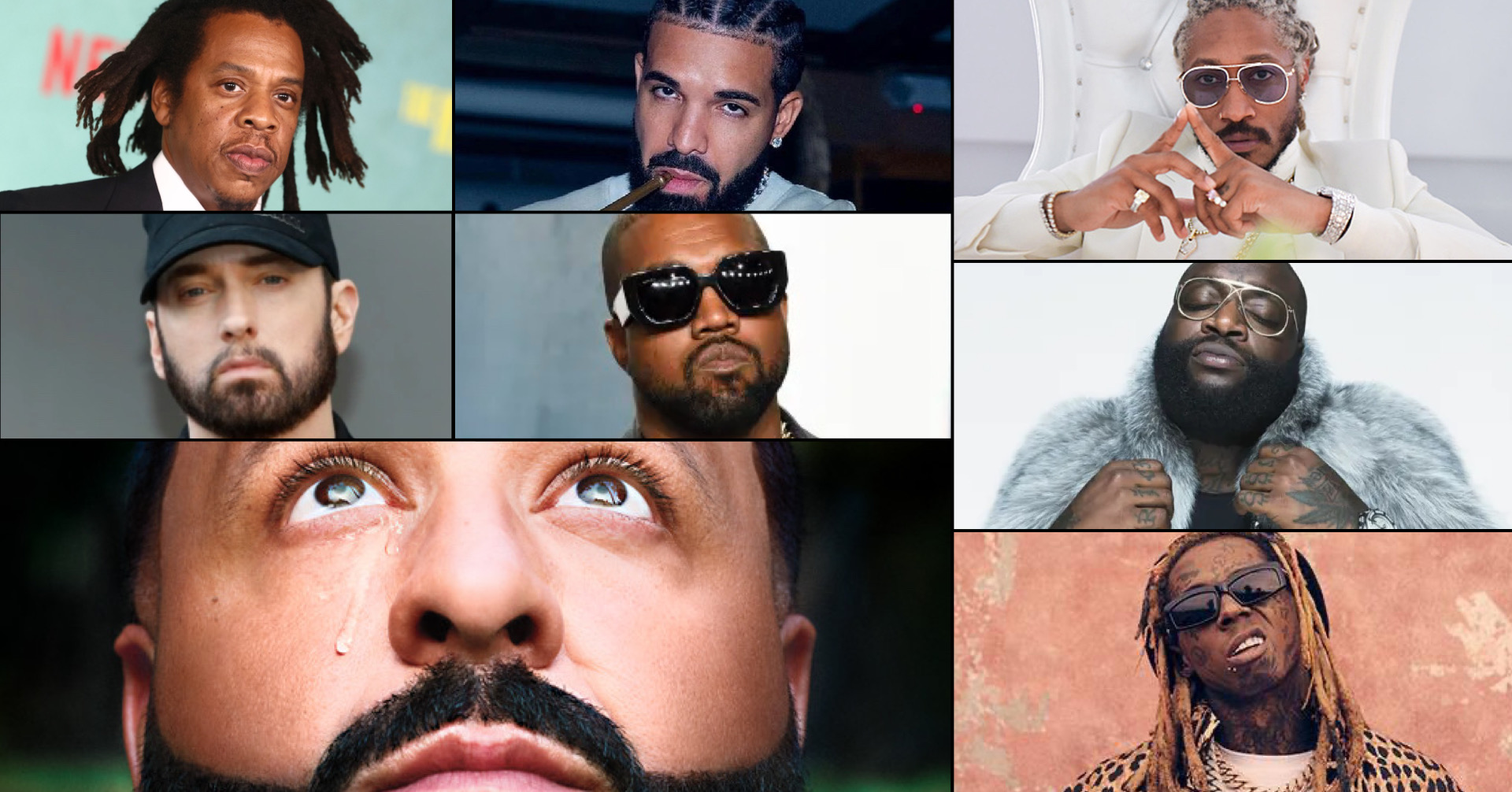 (September 8, 2022).  How did a 46-year-old deejay and former radio show host with Palestinian lineage and no rapping repertoire of his own develop enough clout to boast one of the most prolific artist rosters on any hip-hop album ever?

In DJ Khaled’s case, it obviously pays to be connected.  Because when you’re connected you’ll have very few problems being a connector, particularly when it comes to securing some of the biggest names as featured guests for your latest album—artists who arguably—and ironically—wouldn’t be able to pull off such a wide range of collaborators for their own sets.

The latest project by the multi-hyphenate marvel Khaled, entitled God Did, topped this past week’s Billboard 200 album chart, making it his fourth trip to the pinnacle.  His first three—all since 2016–were Major Key, Grateful and Khaled, Khaled.

Only twelve other hip-hop artists—ten of whom are still living—have had more No. 1 albums than Khaled.  Seven of those ten living rappers are featured on God Did.

In total, Khaled’s God Did features 31 different guest artists.  That’s a lot of sharing of space for an album whose total playing time is only 57 minutes and eleven seconds spread across 18 tracks.

But those 31 artists aren’t just any acts.  They’re arguably the most prolific collection of artists to appear on any one studio album—hip-hop or otherwise—that wasn’t a soundtrack, a benefit album or other type of compilation.

Between the 31 artists featured on God Did (see table below), they’ve scored eighty-one(!) career No. 1 albums on the Billboard 200.  Throw in Khaled’s previous three No. 1s, and there are 84 total career chart-topping albums spread among the 32 artists receiving name credit on God Did.

In fact, with Jay-Z, Drake, Ye, Eminem and Future all having features on the album, DJ Khaled has secured the five rappers with the most No. 1s of all hip-hop artists on one LP!  Those five rappers alone account for 53 No. 1 albums in their collective catalogues.

How many other hip-hop albums can claim to have the five most prolific rappers in Billboard history on the same set?  Throw in Lil Wayne and Rick Ross, and Khaled’s God Did (as mentioned earlier) has seven of the ten living rappers with the most No. 1 albums in history all on one LP.

All that’s missing are Nas, J. Cole and Kendrick Lamar (and they have appeared on previous Khaled albums, including all three on his first No. 1, 2016’s Major Key).

Simply put—using collaborative power as the metric—Khaled may have more pull in hip-hop than any one of the featured artists themselves.  How many of those rappers—Jay-Z, Drake or Ye included—could have featured as large a group of other top-tiered artists on their own albums as Khaled has?

This is remarkable for the veteran curator—a 46-year-old Palestinian-American man whose first claim to fame was deejaying at a local New Orleans spot before parlaying his affable personality into becoming a radio personality, a hype man and an executive producer of albums (namely his own).  To say he started from humble beginnings before working his way to the top would be a major understatement.

As Captain Obvious might say, one thing Khaled is not, however, is a rapper (or singer, for that matter).  In fact, one might be inclined to say that he has built his entire music career around two logos containing just six words: “We the best music” and “another one”—one or both of which has branded nearly every track he’s released since the aughts.

Perhaps it’s the fact that he’s not a rapper that has allowed him to exploit such a lucrative roster of features on his albums.  For one, the “DJ” label means that featured artists are naturally the stars on his singles, not Khaled himself.

One need look no further than all the hype surrounding Jay-Z’s four-minute verse on the title track from God Did (a verse that at four minutes and seven seconds is one minute longer than the average length of all the other songs on the album (3:07)). That verse alone has sparked intense debate about whether it’s one of Jay’s best ever (it’s not, but it’s certainly his longest of this decade).

Two: without any rap history of Khaled’s own, the competition and beef factor is non-existent.  The closest DJ Khaled has come to having a lingering beef with anyone in the rap game was his and 50 Cent’s head-bumping that began in the aughts.

But even that was a conflict that started not because of any diss raps or verbal attacks against 50 by the jubilant DJ, but because Khaled openly left the “In Da Club” rapper’s Get Rich or Die Trying CD out of his bag of classics while appearing on BET’s “Rap City” in 2007.   It was a move Khaled attributed to his stance for “love” and “unity.”

As 50 has proven to be the internet’s biggest social media troll over the past few years, maybe the more jubilant Khaled was onto something back then.  And with God Did, the deejay from New Orleans now has twice as many No. 1 albums as the Queens rapper, who hasn’t topped the charts since 2005.

Needless to say, you’ll likely never see 50 Cent on one of DJ Khaled’s albums, but as one of the most connected entertainers in all of music, the “All I Do Is Win” artist has no problem securing hip-hop’s elite as featured acts.

Here is the breakdown of the 31 artists (excluding Khaled himself) featured on God Did and their No. 1 history on the Billboard 200.