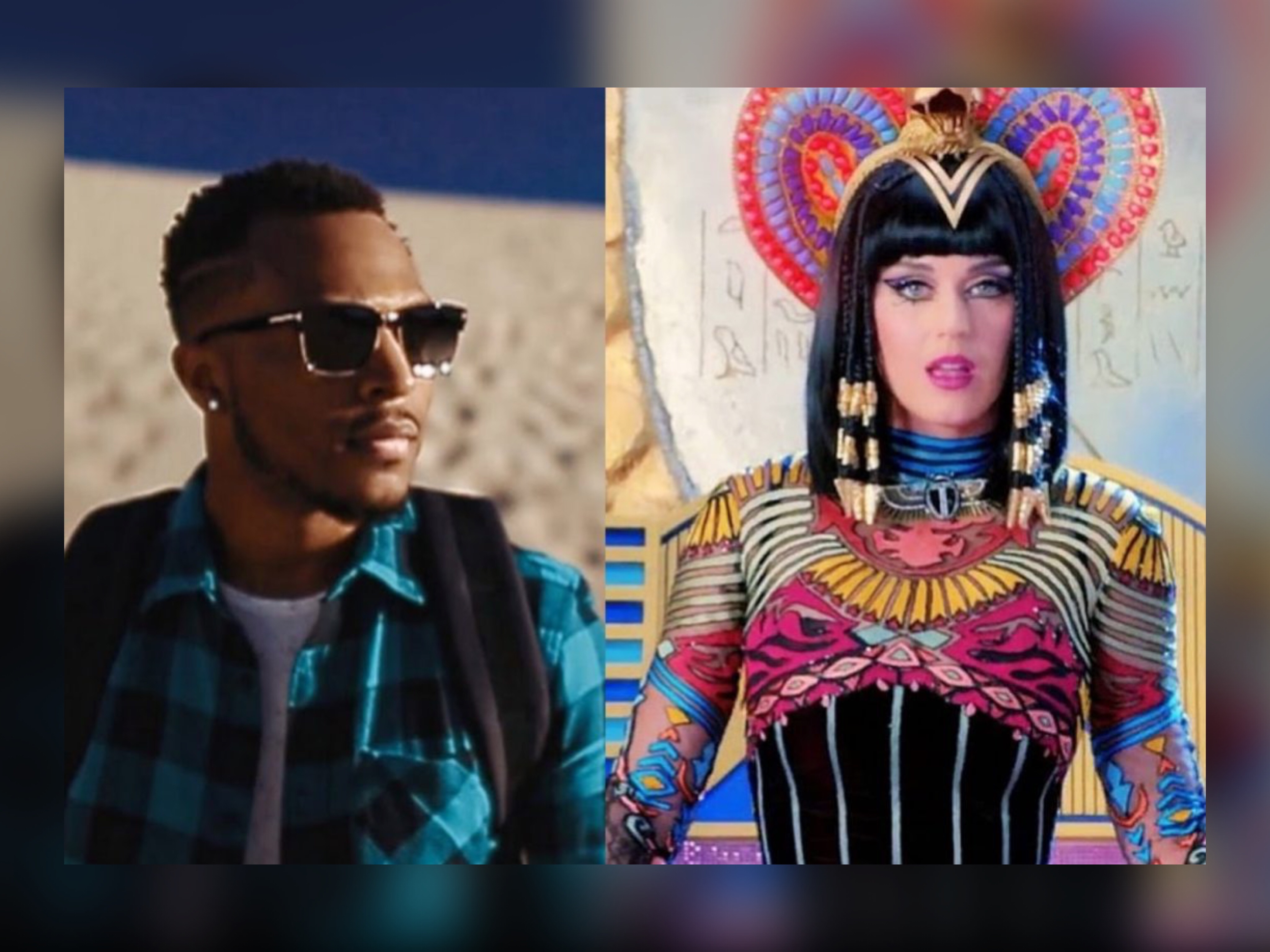 The pop superstar and American Idol judge hasn’t had a No. 1 hit song in more than five years.

And now a Los Angeles jury of nine people determined that her last one – 2014’s “Dark Horse” – wasn’t really hers to begin with.

They ruled, in fact, that Perry and her co-writers/producers stole key parts of the tune from – of all things – a rap song, albeit a Christian one.

So now Katy Perry and her record company, Capitol Records, have to pay – to the tune of $2.8M – Christian rapper Marcus Gray, who went by the stage name Flame when he co-wrote and recorded the 2008 song “Joyful Noise,” the one jurors found Perry and her co-writers/producers guilty of stealing from in the trial earlier this week.

(Myth-buster #1: Y’all thought that rappers were always the perpetrators of this act – well, at least they get permission first.  Pop stars like Perry, Robin Thicke and Ed Sheeran?  Not so much…but I digress.)

Deciding that Perry stole from Gray was likely the easy part of this case compared to Phase Two: calculating the damages. The math that went into figuring how much of a check Perry and her fellow defendants would have to write Gray and his co-writers was nothing if it wasn’t complex.

To get a sense for how much of a windfall this court ruling would be for Gray & Co., one must first understand the history and the numbers on “Dark Horse.”

Perry’s song topped the charts in eight countries (including the US).  It sold an astounding 13 million copies (combining downloads and streaming equivalent units) and was certified diamond by the RIAA.  It’s the fourth-biggest chart hit of Perry’s career – based on Billboard stats – and it ranked as the second-biggest single of 2014 (behind Pharrell’s ubiquitous tune “Happy”).

But it was in 2014, not long after “Dark Horse” peaked in popularity, that Christian rapper Flame filed the copyright infringement suit against Perry that would net him the biggest payday of his life more than five years later.

According to news accounts of the jury trial, Perry’s primary defense was that: 1) she’d never heard “Joyful Noise” and that she doesn’t even listen to Christian music; and 2) the elements of “Joyful Noise” being disputed were common in music and therefore not copyrightable, and that a ruling in Gray’s favor would be damaging to songwriters everywhere.  (By the way, that second defense was used by Robin Thicke in his “Blurred Lines” trial against the family of Marvin Gaye, and it didn’t work there either…just sayin’.)

All Gray had to show was that his song had been streamed more than two million times on Spotify, had even more YouTube views, and wasn’t just some obscure gospel tune that could be tucked away in an insignificant corner – effectively eliminating the “I never heard it before” defense.

What remained then – after the unanimous verdict against Perry and Co. – were the mathematics.  Just how much had “Dark Horse” netted the singer and her label and other co-defendants (including the song’s producer Dr. Luke), and how much of it could be attributed to the incorporation of beats and note patterns borrowed from “Joyful Noise”?

Both parties agreed that Perry made about $3M from “Dark Horse,” minus about $600K in promotional expenses she owed Capitol Records (Myth-buster #2: Folks thought that artists didn’t make much from singles in the digital/streaming age…but again, I digress).

Gray and his legal team argued that the record company earned much more – on the order of $31M – from the success of “Dark Horse” and its parent album Prism as well as a concert DVD containing the song.

Capitol and its parent company, Universal Music Group, contended that its earnings from “Dark Horse” were only $650K, when the expenses of promoting “Dark Horse” and marketing a brand like Katy Perry were factored in.  They cited things like $13K for a wardrobe stylist (per night), $800 for a manicure, and $2K for flashing cocktail ice cubes.

Universal Music Group VP Steve Drellishack argued in court that such expenses were essential to Katy’s brand at the time that “Dark Horse” was popular.  He also said that other factors, including manufacturing and digital transmission costs for the album, plus employee salaries and artist royalties, diminished from the label’s earnings.

Yet, here’s where things get even more complex.

“Dark Horse” was one of 13 songs on Prism, and one of 16 on a subsequently released deluxe version of the album. The label stated that any earnings from Prism should be divided equally between all the songs.

Gray’s team stated that “Dark Horse” was arguably the biggest on the album (actually there’s no argument, it was the biggest), and that its share of Prism’s earnings should be bigger than what the label proposed.

Then there was the dispute about how much of “Dark Horse’s” success was due to the inclusion of the “Joyful Noise” elements, and how much was due to other factors, like Katy Perry’s immense popularity.  Remember, the colorful singer was one of the biggest pop stars in the world at the time as she had already racked up eight No. 1 singles, including five from her previous album Teenage Dream, tying a Michael Jackson record.

The label could have argued – and likely did – that Perry’s fans were primed for her latest single and that it was her celebrity value – as well as the label’s intense marketing, and not any specific song elements – particularly the disputed parts, that led to its enormous success.  Of course, that would not explain how “Dark Horse,” as the album’s third single, was even more successful than its first two, which had to have been equally promoted by Capitol.

Further complicating things was the nature of music consumption these days.  Capitol stated that just 1.2 million traditional copies of Prism were sold, while “Dark Horse” has been streamed 1.89 billion times (wow!).

While not discussed in news articles covering the case, accountants might have been consulted to provide evidence of how many of the copies Prism sold were while “Dark Horse” was popular, versus the number of albums that were sold before the song entered into America’s consciousness as an official single release three months after the album came.

Whatever those numbers were, it was predictable that Gray’s people would go high while Capitol and UMG would go low when it came to determining how much money Gray was owed.  Gray’s people sought a paycheck of $20M.  Capitol/UMG thought $350K was appropriate.

The jurors somehow came up with $2.8M, which was more than Perry netted, and depending upon whom one believes, either significantly more than the label earned or a proverbial drop in the Capitol Records bucket.

Either way, per the ruling, Perry has to come up with $550K of that total, with the remainder being assessed to the label.

Left hanging in the balance is what impact this and similar recent rulings against superstar pop acts and their megahit songs this decade will have on music going forward.  Recall Ed Sheeran was penalized for interpolating TLC’s “No Scrubs” for 2017’s biggest hit “Shape of You,” while Mark Ronson and Bruno Mars had to settle with the writers of Gap Band’s “I Don’t Believe You Wanna Get Up and Dance (Oops Upside Your Head),” to give them songwriting credits on “Uptown Funk,” the biggest song of 2015.  Then there’s the Marvin Gaye estate ruling against Robin Thicke and Pharrell Williams for 2013’s biggest single, “Blurred Lines.”

With the application of law being largely steeped in precedent, and with the limited number of musical note patterns and beat and chord progressions available to artists these days – especially those that have the kind of appeal to become big hits or huge artistic achievements – singers and songwriters may have to resort to just putting down some beats without melodies and singing or rapping over them to avoid litigation in the future.

Or else they may never know when that little tune they’ve created in their heads is actually the result of something they’ve heard before, either subconsciously or otherwise.

They won’t know, that is, until a jury tells them.