Mariah’s “Christmas” finally hitting No. 1 is okay; but this week’s other amazing chart feats are more impressive! 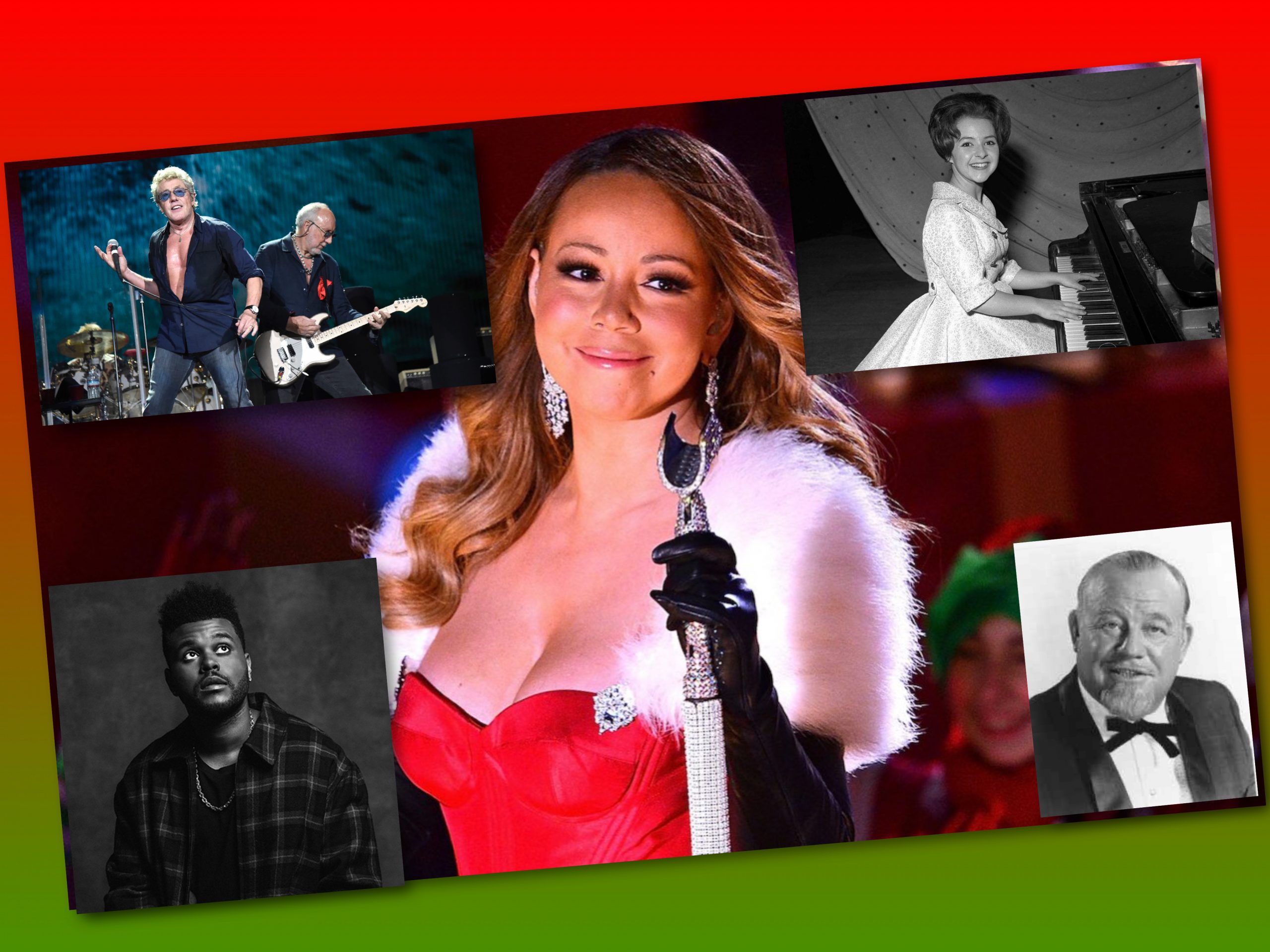 (December 17, 2019).  By now, people who follow these things – and even those who don’t – know that Mariah Carey’s ubiquitous Christmas classic, “All I Want for Christmas is You,” finally reached No. 1 on the Billboard Hot 100 this week after 25 years.

By ascending to No. 1, “All I Want” gives Mariah Carey several key distinctions – besides reaching the top of the charts with a song that people over 55 can finally say they’ve heard before.

She also now has the second-longest span of No. 1 singles in the chart’s history with 29 years and four months between the crowning of her debut single, “Vision of Love,” in August 1990 and “All I Want” this week.  The longest span is Cher with 33 years, seven months and three weeks between her first “I Got You Babe” (with Sonny Bono) in August 1965 and “Believe” in 1999.  Cher also had three No. 1s in between.

There are other Mariah milestones established by “Christmas” this week, like having a No. 1 song in three different decades (the ‘90s, ‘00s and ‘10s), having only the second Christmas holiday-themed song to ever reach No. 1 (after David Seville’s “The Chipmunk Song”), and having the song that took the longest to reach No. 1 after its chart debut (“Christmas” leaps to No. 1 in its 35th chart week – two weeks more than Los Del Rio’s “Macarena (Bayside Boys’ Mix)” took in 1996).

But let’s face it, Mariah hitting No. 1 with what is easily the most heavily promoted song on the charts today was a foregone conclusion.  Before we could even unwrap this year’s Halloween candy, she had launched an all-out blitz for the omnipresent tune, including releasing a new commemorative video, a new CD single (the first time the song was actually available in a commercial single format), a tour bearing the song’s name, and even a tweet to officially kick off the holiday season – letting us all know that it wasn’t just Christmas season, but it was “All I Want For Christmas Is You” season.

No surprise:  This blog predicted that “All I Want” would finally reach No. 1 this season.

So Mimi’s fans will pardon us if we don’t get all cheerful about the fact that she achieved chart supremacy with a song that feels like it’s been No. 1 for eons.

Instead, this blog ponders whether these other chart feats – all occurring this week as well – deserve more praise.

Brenda Lee at No. 3 with a song as old as the chart itself.

Brenda Lee’s 1958 classic “Rockin’ Around the Christmas Tree” ascends from No. 8 on last week’s Hot 100 chart to No. 3 this week – its highest position yet!

It’s worth noting that Lee, who is 75, has a chart career that predates the Hot 100’s existence.  She first made Billboard’s “Best Sellers in Stores” list – the Hot 100’s predecessor – in March 1957.  The Hot 100 made its debut in Billboard on August 4, 1958 and continues to this day as the magazine’s premier singles chart.

A new animated video (below) for “Rockin’” helped propel the song to its new peak this week.  And if the holiday momentum can carry it to the top in the next two weeks, not only would “Rockin’” be in a three-way tie with Mariah Carey’s single and David Seville’s “The Chipmunk Song” as the highest ranking holiday-themed hits of all time, but it would finally tie Lee with Connie Frances, her early 1960s chart nemesis, with three No. 1 Hot 100 singles apiece.  Now THAT’s a gift worth the wait!

Speaking of No. 1’s, what happened to last week’s chart topper?

While we’re being all giddy about Mariah Carey and Brenda Lee’s good holiday tidings, another No. 1 artist suffered a more dubious distinction on this week’s chart.

Last week’s No. 1 – a tune called “Heartless” by The Weeknd – rocketed there from No. 32 the previous week, but whiplashes back down to No. 17 this week.  It’s a classic case of Santa giveth, and the Scrooge taketh away.

That fall from No. 1 to No. 17 is the largest drop from the top spot in Hot 100 history, beating a 45-year-old record established when Dionne Warwick & the Spinners’ fell from No. 1 to No. 15 with “Then Came You” in October 1974 – a record that was tied just a week later when the late Billy Preston’s “Nothing from Nothing” suffered the same fate.

For 45 years, those two twin droppers held this dubious distinction, with Preston and four of the five members of the Spinners’ classic lineup carrying it to their graves.

Now Warwick and the lone surviving original Spinner (Henry Fambrough) can enjoy this holiday season knowing that The Weeknd has lifted their burden and now carries that weight all by himself.

The Weeknd (real name Abel Tesfaye) can partially blame the holidays for his precipitous fall from the penthouse.  There are no fewer than four Christmas songs ranked above “Heartless” on this week’s chart, something that will likely increase over the remaining two weeks of the holiday season, further pushing the Canadian R&B singer down the list.

For what’s likely the first time this has happened so late in a calendar year, half of the songs in this week’s top ten predate 2019. In addition to the songs by Mariah Carey and Brenda Lee, Burl Ives’ 1964 classic “A Holly Jolly Christmas” leaps to No. 10.

Additionally, two non-holiday songs from earlier this decade grace the upper tier: Lizzo’s “Good As Hell” moves up to No. 5 and Juice WRLD’s “Lucid Dreams” re-enters the chart at No. 8. Lizzo’s single was first released in 2016, while Juice’s 2018 smash re-enters in the wake of the rapper’s death last week. It’s possible that even more oldies could reach the top ten next week as several Christmas classics lurk outside the top ten.

And speaking of oldies…

Over on the album chart, The Who (now mainly just a duet including Pete Townshend and Roger Daltrey) debut at No. 2 with their first studio album in over 13 years.

The album, simply titled Who, instantly matches the peak of the group’s three previous highest charting albums: 1973’s Quadrophenia, 1978’s Who Are You, and 1975’s soundtrack version of Tommy – all of which climbed to No. 2 during their original releases.

This news highlights the fact that The Who, which has been charting for over half a century, has never had a No. 1 album – but they came oh-so-close this week by narrowly missing the mark.  Who sold 88,000 albums plus about 1000 additional equivalent units due to streaming and individual song downloads.

That 88,000 is far more than the album that ranks above it at No. 1, rapper Roddy Ricch’s Please Excuse Me For Being Antisocial, which sold only 3,000 traditional albums.  The difference is that the young rapper added about 98,000 units solely from streaming – the consuming method of choice for hip-hop fans – sending his album to the top.

The Who’s fans can either take solace in knowing that – streaming aside – their group’s latest was actually the best selling album in the US this past week – or they can breathe a sigh of relief that classics like Quadrophenia, Tommy Soundtrack and Who Are You weren’t topped by an album many of them haven’t heard or won’t be playing 40 years from now.

So, when all is said and done, Mariah Carey certainly deserves praise for her latest No. 1 accomplishment on the Hot 100, but this week’s chart feats by Brenda Lee, The Weeknd and The Who are arguably more amazing, IMHO.

You can also register for free to receive notifications of future articles by visiting the home page (scroll up to the top).