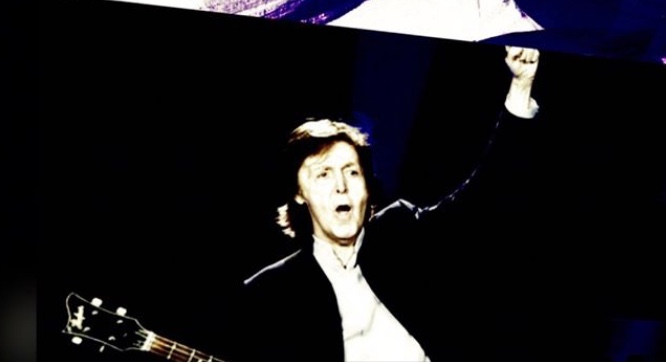 When it comes to music royalty and concerts, most would agree that artists of a certain stature don’t need any theatrics to go along with their huge repertoire of hits.

No frills, no high-tech stage magic, no stylish graphics displays… just straight-up jamming with a handful of tight musicians at the top of their game giving the crowd what it ultimately wants – great music that they’ve come to know and love for, in this case, over half a century.

Sir James Paul McCartney – arguably the most accomplished musician in modern history with hundreds of millions of albums and singles sold, 29 No. 1 hit songs on the Billboard Hot 100, plus three more that he co-wrote (Elton John’s “Lucy In The Sky With Diamonds,” Peter & Gordon’s “A World Without Love” and Stars on 45’s “Medley”), 27 No. 1 albums, nearly two dozen Grammys, double induction into the Rock and Roll Hall of Fame, and oh yeah… that Beatles gig – would certainly fall in this category.

However, when McCartney unleashed the lights-and-pyrotechnic explosion that was “Live And Let Die,” some 31 songs into a 39-song set at the Hollywood Amphitheater in the south Chicago suburb of Tinley Park during his current “One On One” tour, the sold-out crowd of nearly 30,000 didn’t know what had just hit them.

But seconds later, just as he finished singing the title line and that crescendo came, the loud explosion of fire and sparkles shot from the stage with enough force to make everyone at the venue feel it.  The pyrotechnics ushered in the song’s uptempo parts, and they continued throughout the masterpiece, making it a spectacle to behold and likely the highlight of a show in which the 75-year-old McCartney could do little wrong.

In this nearly 3-hour extravaganza – the first of two shows here on July 25-26, 2017, the most fab member of the former Fab-Four breezed though 39 songs that were, as McCartney put it, “some old, some new and some in between.”  The crowd loved all of it, opting to stand for most of the concert, taking their seats for the first time five songs in, when the ex-Beatle played “Temporary Secretary,” an “in-between,” electronic cult-favorite tune from his 1980 album, McCartney 2.

That obscure song choice reflected the beauty of a show by an artist who could have performed another three-hour concert featuring 39 other tracks and still left fans satisfied (as proof: he only performed one of his nine post-Beatles No. 1 songs, that being the eternally stage-friendly “Band on The Run”).

Of the 39 songs that McCartney did play, 24 were recorded by the Fab Four, including one of my personal faves, “We Can Work It Out,” which Paul and his band played faithfully to the original – accordion and tambourine included; and another fave, “Lady Madonna,” the 1968 top-five tune that just missed adding to the Beatles cache of 20 No. 1 hits.

But McCartney was well aware that not all of his set list choices had been hits.  When he played “Queenie Eye” – a single from his 2013 album, New – he acknowledged that when he played Beatles tunes, “it’s like a galaxy out there, all the cell phones (in the audience) light up. When we play the new songs, it’s like a black hole. But we don’t care, we’re gonna play them anyway.”  The audience cheered as he then launched into “New,” that album’s title track.

McCartney’s humorous banter was just a part of what made this show so entertaining – and so engaging.  There were other fun moments – like when Paul turned around and shook his ass at the end of The Beatles’ calypso-styled “And I Love Her” – much to the crowd’s delight.

There were the obligatory audience-participation moments too, like when he played the twangy “In Spite Of It All,” his pre-1960s song with the Beatles when they were still known as the Quarrymen.  By the song’s end, Sir Paul had the crowd singing the hook to what was previously an unfamiliar tune.

The show also had its tearful moments, including Paul’s dedication to first wife Linda (“Maybe I’m Amazed,” the 1977 top-ten single that is still one of McCartney’s best and representative of the iconic singer/songwriter at his most vulnerable-sounding).  A later dedication to fellow Beatle George Harrison (the Harrison-penned Beatles hit, “Something”) began with McCartney playing a ukulele solo before the band joined in for a more faithful rendition of the original.  He then thanked his late band mate for writing such a beautiful song.

In a tribute to the late legendary Beatles producer George Martin (who died in 2016 at age 90), McCartney wistfully recalled their early recording sessions where Martin had Paul (nervously) sing the lead vocal for a tune that had been previously sung by John Lennon.  Martin’s vision was that Lennon would come in at the end of McCartney’s verse with the familiar harmonica hook that became the song’s trademark.  The song: “Love Me Do.”

As for his relationship with Lennon, McCartney provided some introspection, the kind that comes with nearly half a century of added wisdom since the Beatles 1970 breakup.  He gave a glimpse into the genuine love he had for his creative partner – despite the rocky nature of their relationship during Lennon’s lifetime.  Sir Paul played the tune “Here Today,” which he had written about Lennon for his 1982 album, Tug of War, two years after the latter’s death – calling it a “conversation we never had.”  When the singer shouted, “Let’s hear it for John!,” the crowd’s roar couldn’t have been louder.

The tears and laughter were aplenty.  But mostly, this show had its educational moments – not just for the under-50 crowd who were too young to have lived through Beatlemania or its immediate aftermath, but for the older set who thought, for example, that a Beatles-Rolling Stones rivalry was an unfriendly one: McCartney squelched that myth by telling the story of his and Lennon’s writing contribution to the Stones’ first major UK hit, “I Wanna Be Your Man,” which Sir Paul then played after referring to any alleged beef between the two rock bands as “fake news,” much to this crowd’s delight.

It was also an education for those who didn’t know that there was a Beatles-Jimi Hendrix connection – after Paul and his band tagged Hendrix’ “Foxey Lady” to the end of the Wings hit, “Let Me Roll It,” Paul told the story of how Hendrix learned the song “Sgt. Peppers Lonely Hearts Club Band” just two days after its release and opened his next show with it.

Another story served as confirmation that the Beatles’ poignant tune “Blackbird,” which Paul played solo while standing atop a rising stage, was indeed inspired by the 1960s Civil Rights-era marches in Birmingham and other southern U.S. cities.  As Paul relayed the story, it seemed to erase any remaining doubt that the Beatles had co-opted this inspiration after-the-fact, something of which the band had been accused in the past.

McCartney, 75 years old and still in apparently great shape, could have enlightened us with his personal accounts of Beatles history all night long, for theirs is that rich with interpersonal drama and trivial facts.  But this show was mainly a chance for the 30,000 revelers of at least three generations to go back and relive a small part of those many Beatles tunes, for which Paul was happy to oblige.

Like the song “Birthday” (from the White Album), which was preceded by Paul inviting a “just-turned” ten-year-old girl to the stage where they exchanged banter about her being in school.  When they exchanged a hug moments later, I instantly thought of all the women in the audience who would have killed to be in that girl’s position some 50-plus years ago.  The youngster on this night couldn’t possibly have fathomed the enormity of what she had just experienced, at least in the eyes of the Beatles’ faithful.

Maybe she’ll appreciate it 50 years from now when she shows her grandchildren the pictures of that night in July 2017 when she met (and hugged) Sir Paul McCartney, the former Beatle…

…and perhaps the most accomplished musician of all time.

At least for this particular night, Beatlemania lived on… in the eyes of 30,000 or so Chicagoans.

*indicates Number One songs on the Billboard Hot 100