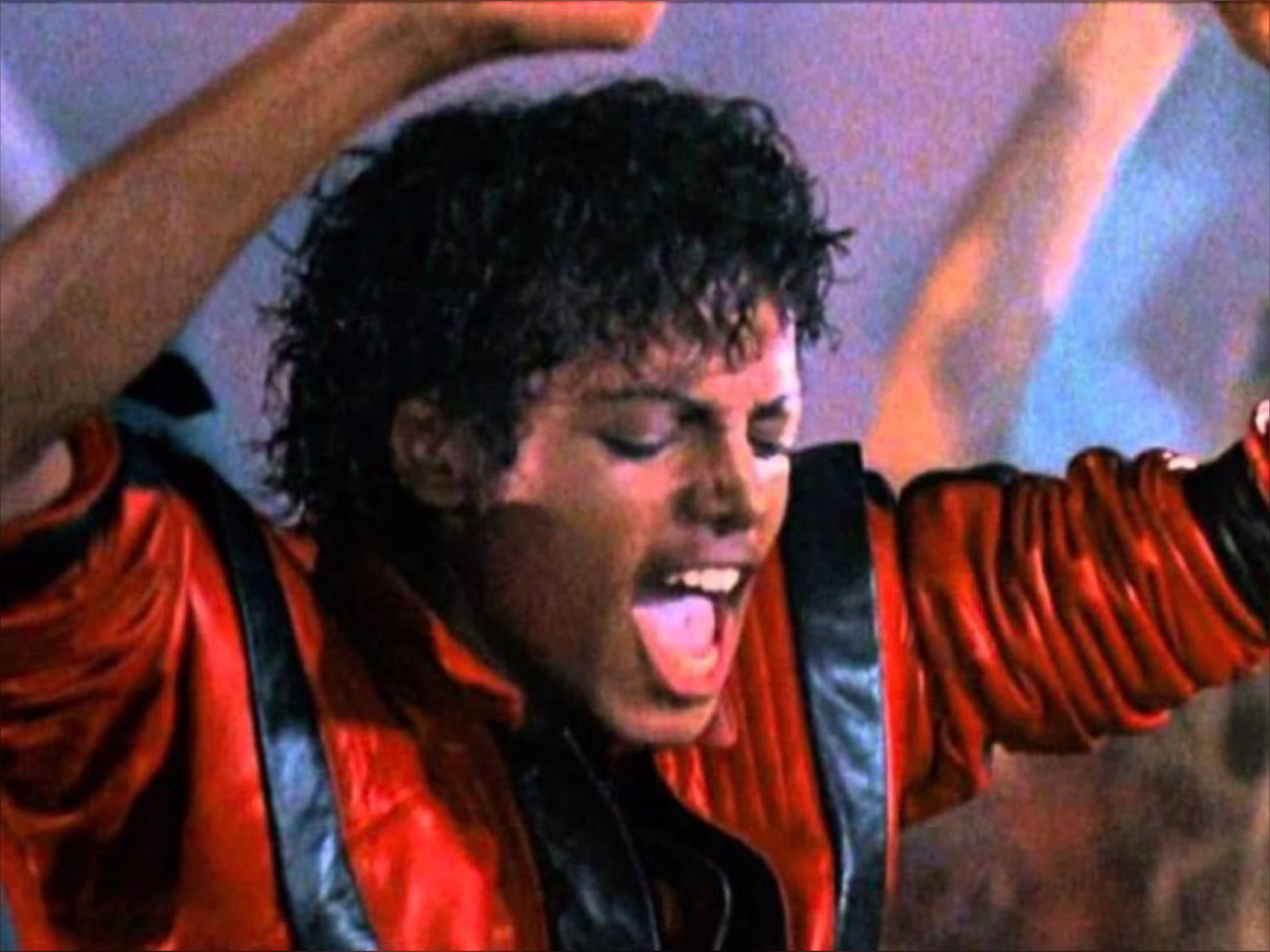 June 25th marks the eighth Anniversary of Michael Jackson’s death.  Most of us likely still remember exactly where we were when first receiving the news of his cardiac arrest and the several hours that unfolded as the media continuously covered his ultimate passing.

Throughout his lifetime, The King of Pop gave us many great moments in pop music history, including iconic videos, great dance moves and, of course, the music itself.

Arguably his greatest contribution is the album that celebrates its 35th anniversary later this year, Thriller, which is still the biggest selling album of all time in both the U.S. and worldwide with reported sales of between 65 and 100 million copies (32 million in the U.S. alone).

To commemorate the King and his landmark album, djrobblog thought it’d be fitting to revisit all nine of its songs – as reimagined by other artists – in the order that they were sequenced on the original album.

As a refresher, seven of Thriller’s nine tracks were released as singles (vinyl 45s) back in the day and all seven of those reached the top ten on the Billboard Hot 100, making it the first of still only a handful of albums that have accomplished that feat.

Thriller’s famous track list went like this (with the songs that were released as singles designated by an asterisk):

(For the vinyl-challenged, the Side-A and Side-B references denote both sides of a 12-inch vinyl album.)

As I searched the internet and Spotify looking for covers of those songs, I expected to find several versions of the bigger hits, like the Number One singles “Billie Jean” and “Beat It.”  The tunes I didn’t expect to find many – if any – versions of were songs like “Baby Be Mine,” “The Lady In My Life” and “Thriller” – the first two because they were never officially released (although “Lady” is still one of Michael’s most famous ballads), and the latter because, well, despite its immense popularity, “Thriller” is such a campy song that I didn’t think there’d be many artists who would take it on.

I was wrong on many counts.

The truth is, there are multiple cover versions of all nine of the songs on Thriller; and very few of them are confined to the post-disco, dance-oriented pop vision Michael had for the originals – with many taking on totally different arrangements in a variety of genres, including jazz, rock, soul, EDM… even death metal and classical.

Based on the number of hits in the search results, we could have put together several different “Thrillers Revisited” using completely different covers on each collection.

For brevity’s sake, djrobblog picked just one interesting set of cover versions and placed them in order of the original album sequence, which you can hear both on the playlist below and in the audio/video countdown (with editorial commentary) further down.

In fact, let’s just get right to it. Check out “Thriller Revisited” and see what you think.

The British organ-jazz sextet known as the Filthy Six gets things kicked off with this 2016 remake of MJ's most energetic tune from 'Thriller.' The spirit of the original remains intact, albeit with a more acid-jazz spin on it.

"Baby Be Mine" - Quadron

This version of "Baby Be Mine" is featured on the soundtrack of the 2012 movie "Think Like A Man." Quadron gives a sultry, yet ethereal take on the song most people usually forget about when it comes to naming the 'Thriller' tracks. This one holds up very well.

"The Girl Is Mine" - Thor featuring Luke Mejares

The cheesiest song on 'Thriller' featured two of the biggest pop stars in history when MJ and Sir Paul McCartney teamed up in 1982. Somehow it sounded slightly less cheesy when the soulful Filipino singer Thor Dulay and special guest Luke Mejares teamed up 25 years later.

With MJ's campy lyrics about ghouls and goblins in the album's title track, it's only fitting that one of the better remakes is an instrumental by this captivating string trio consisting of a bass, cello and violin. This beats the kiddie Glee cover any day!

And you thought Michael rocked it out for the first time when he recorded "Beat It"? Wait until you hear this Italian death metal band's take on the matter. Note: in addition to taking this to No. 1 on Billboard's R&B and Pop singles charts, MJ's original "Beat It" also reached the Billboard Album Rock Tracks chart in 1983.

The late Chris Cornell of Soundgarden and Audioslave fame covered Michael's biggest hit from 'Thriller' on his solo album, 'Carry On.' Check out Cornell's live "unplugged" version in the above clip.

Jazz legend Miles Davis included this interpretation of MJ's "Human Nature" on his 1985 album 'You're Under Arrest.' The above video captures a live 1989 performance with Miles and special guest star Chaka Khan improvising on this tune in true jazz-like fashion.

The impressive young singer Alex Goot from Poughkeepsie, NY is best known for covering other people's tunes as a virtual one-man band. This highly charged pop version of "P.Y.T." comes from his 2012 album, 'Songs I Wish I'd Wrote, Vol. 3.' Get ready for a joyride that departs significantly from MJ's original, but sounds good nonetheless. (Note: in recent years, the once overlooked "P.Y.T." has slowly become a favorite among MJ fans.)

Of the nine songs on 'Thriller', this one had the most cover tunes that I could find - surprisingly - given Epic Records' decision to withhold the original from single release in 1984 (after the seventh single, "Thriller," ran its course). The late Lou Rawls applies his soulful baritone to the classic ballad with some sweet backing vocalists that give it even more depth than the original, IMHO.

When you finish scrolling through the songs, leave a comment either at the bottom of this article or on the blog’s Facebook page.  Maybe you think the ones I’ve picked would have MJ rolling over in his tomb (yes, he was entombed in Glendale, CA), or maybe you’ve heard some better covers that you think belong in the set.  Either way, let me know something.

And may the King of Pop, Michael Jackson, continue to rest in harmony.