DAMN. Should We Really Be Celebrating Kendrick? 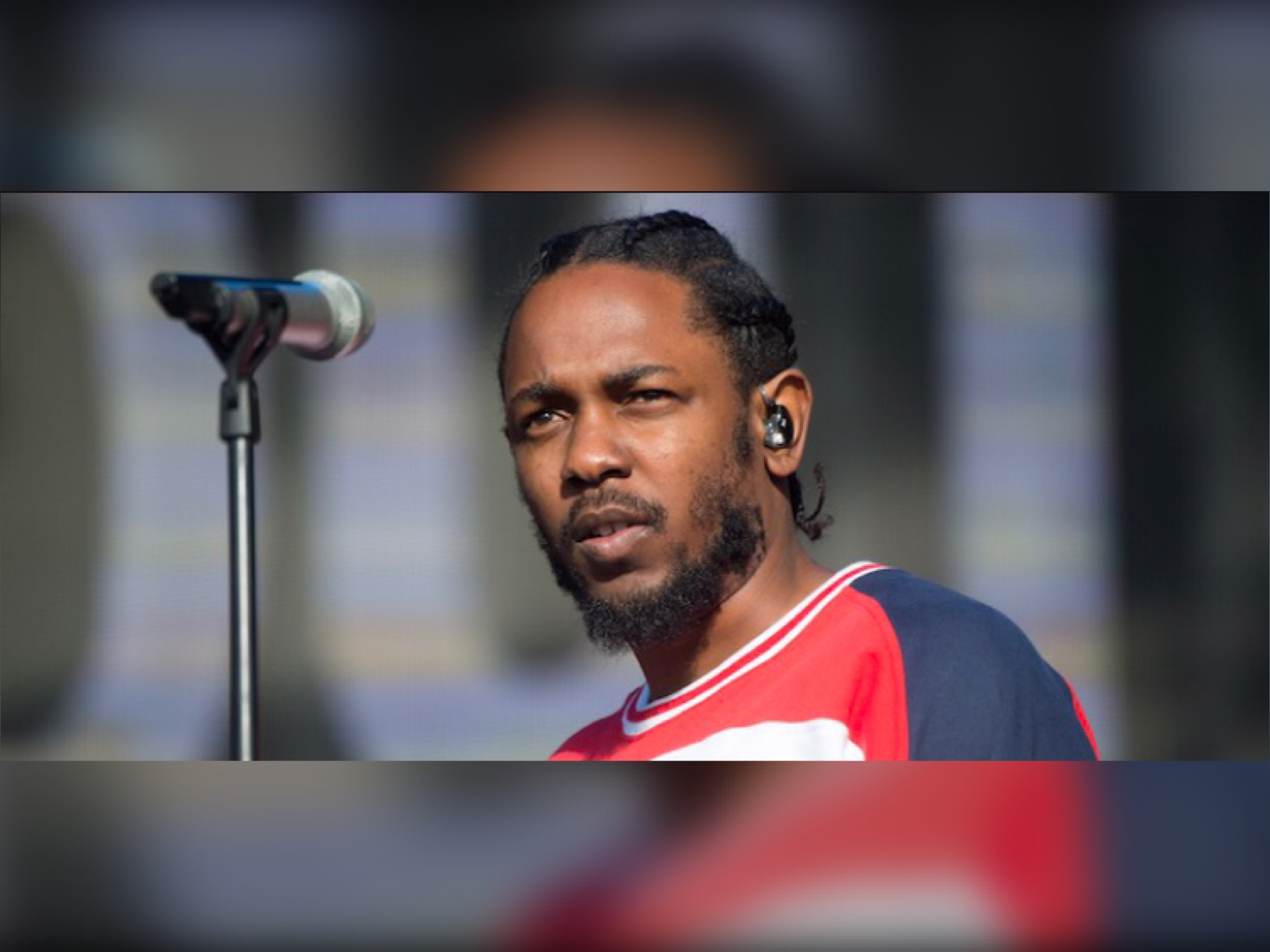 In other words, the stuff that so-called socially enlightened and culturally woke – and some not-so-woke – rappers have rapped about for decades.

It also includes featured turns by superstars like Rihanna – the biggest pop singles artist of the past dozen years – and alternative rock gods U2, a group who ranks high on everyone’s cool chart, no matter the era in which one grew up.

In other words, the safest guest stars a rapper can pair himself while straddling the line between radio-friendliness and street credibility.  Remember, this is the same guy who teamed up with country-turned-pop music’s good girl Taylor Swift (on “Bad Blood”) at the height of Butterfly’s success two years ago.

To that radio-friendly end, Lamar just accomplished something that hasn’t been done in nearly seven years.  The album’s first official single, “HUMBLE.,” debuted on the Billboard Hot 100 chart at a lofty No. 2, just behind Ed Sheeran’s long-running No. 1 single “Shape Of You.”

With that entry, Lamar’s single marks the highest début for a rapper since Eminem also debuted at the runner-up position in July 2010 with “Love The Way You Lie,” featuring Rihanna.  Eminem’s song went on to top the chart in the ensuing weeks…the jury is still out on “HUMBLE.”

That Lamar was able to début so high is likely not a surprise to anyone.  His rise to superstardom rivals that of any rapper in the past 20 years – Jay Z, Kanye, Eminem, Drake and 50 Cent notwithstanding.  He’s certainly now reached that upper echelon of rappers whose albums’ chart-topping status is a foregone conclusion as long as they’re timed not to compete with other high-profile album releases.  And just as first official single “HUMBLE.” made a lofty Hot 100 entry this week, the album’s remaining 13 tracks will likely be sprinkled throughout the Hot 100 during their first week of eligibility a week from now.

But should DAMN., and more generally Kendrick himself, really be celebrated based on this album and his latest chart accomplishments?

I’m listening to the album now – as I do all albums – while I write about it.  And honestly, save for a few tracks, it’s not moving me…at least not yet.  It’s certainly no instant classic like Butterfly.  Heck, I’d go as far as to say it’s actually closer to the less heralded untitled, unmastered in terms of structure and impact.  The album decidedly takes a turn towards radio accessibility and away from the more jazz-centric Butterfly, but even with that goal in mind, the songs collectively don’t measure up.  I don’t yet hear this album’s “Alright” or “King Kunta,”…you know, those jams we’ll be talking about years from now.

Let’s take the obvious radio-get, the Rihanna-featured track, “LOYALTY.”  It showcases the two artists trading deadpanned lyrics over a stretched-out trap beat with hardly any melody attached.  The most clever aspect of the song is the underlying, sped-up sample contained throughout (and that’s somewhat underwhelming and has been done before, many times).

Even the high-charting single “HUMBLE.” – Lamar’s highest to date as a lead artist – falls short.  In it, he reminisces about “syrup sandwiches and crime allowances” before reminding us about the good life he’s enjoyed since his meteoric climb to fame, and before basically telling folks (likely groupies or other rappers) to get off his dick.

There’s likely a subtle message in “HUMBLE.” where the word “bitch” is uttered 38 times (in the explicit version).  That message, however, requires some reading between the lines given the juxtaposition of its emboldened lyrics and the song’s oxymoronic title.  The other problem is his slow cadence in the song actually recalls a bad Eazy-E, and the track’s 8-note piano loop repeats throughout with no change-up from the verse to the chorus.  There’s no chord-changing bridge, in fact, there’s no chord period.  The song’s only saving grace is that it’s clipped at a short 2:57 in length.

Despite this and other shortcomings, “DAMN.” does have its good moments.

You have to wait until the last track to get to the album’s best one: “DUCKWORTH.”  That one (which bears the rapper’s real last name) is as noteworthy for its old-school storytelling as it is for its many knee-jerky sample and tempo change-ups.  It’s clear about 45 seconds in that you’ll have no idea where this song is going next musically, and that’s what’s great about it.  You’ll wanna listen again and again just to try to figure it all out.

Lyrically, the song speaks of a chance meeting between Kendrick’s father and the future label executive for whom Kendrick now works, Anthony “Top Dawg” Tiffith.  As the story goes, Tiffith, a hardened hood at the time, meets “Ducky” at the KFC drive-thru where the latter worked.  Ducky gives him free chicken and biscuits to get on the criminal’s good side, knowing that he’d robbed the place before.  It works, and Tiffith spares Ducky his life, straightens out his own and winds up heading the label where the “greatest rapper” now works.

Unfortunately, that the song doesn’t follow the standard verse-chorus-verse-chorus formula will prevent it from getting much radio love.  But it has a chance to dominate personal playlists and streaming charts more than the other tracks from DAMN., and its otherworldly innovation will have you wondering where that creative spirit was when the rest of the album was being made.

The irony that Lamar is assisted by an Irishman in this accounting is as big a statement about how the country is viewed by the international community as anything else on American radio.

Lamar, whose previous full-length album Butterfly blatantly yet deftly tackled issues of racism and police brutality during an era when those topics dominated headlines, still addresses those issues (the first two tracks “BLOOD.” and “DNA.” include excerpts from Fox News clips in which the network’s anchors are heard ignorantly condemning Lamar’s anti-police brutality lyrics and hip-hop in general).

Indeed, the album caters to Kendrick’s audience, and his loyal fans will likely eat it up like Skittles.  They’ll see things about it that I don’t (yet).  But that doesn’t mean the album isn’t hard to figure out musically.  It may take many listens before I and others find DAMN.’s best virtues.

The real problem is that this project – like most hip-hop albums – preaches to the choir, i.e., those that are most likely to be willing to give it a listen in the first place.  In that sense, it only serves to remind us who already know how fucked up our collective state of affairs are, rather than bringing those messages to those who really need to hear it, those in denial or who are in positions to do something about it.

Perhaps this is asking too much of a 29-year-old rapper who, at his core, is still just an entertainer.  But given Kendrick’s vast audience, and the fact that he’ll likely have our attention for years to come, wouldn’t it be nice if he could deliver a set of messages that actually changed the paradigm for hip-hop, one that purged itself of excessive self-indulgence, blatant references to “bitches” and “niggas,” and repetitive attacks of easy (albeit still deserving) targets like Faux News and the current White House occupant (not that I’ll ever tire of hearing revolts against No. 45’s regime, but it’s just too easy…I’m just sayin’).

Forty years into hip-hop’s existence, there’s hardly any ground that hasn’t been covered already.  Rappers surely can’t be faulted (too much) for treading ground that others have traveled before them.  Other musicians in other genres do it all the time.

Still, it would be nice if a rapper like Kendrick Lamar who’s been exalted to God-like status by critics and fans alike, would somehow break new ground…ground that DAMN. – save for a few tracks – sadly does not.

What do you think?

27 thoughts on “DAMN. Should We Really Be Celebrating Kendrick?”