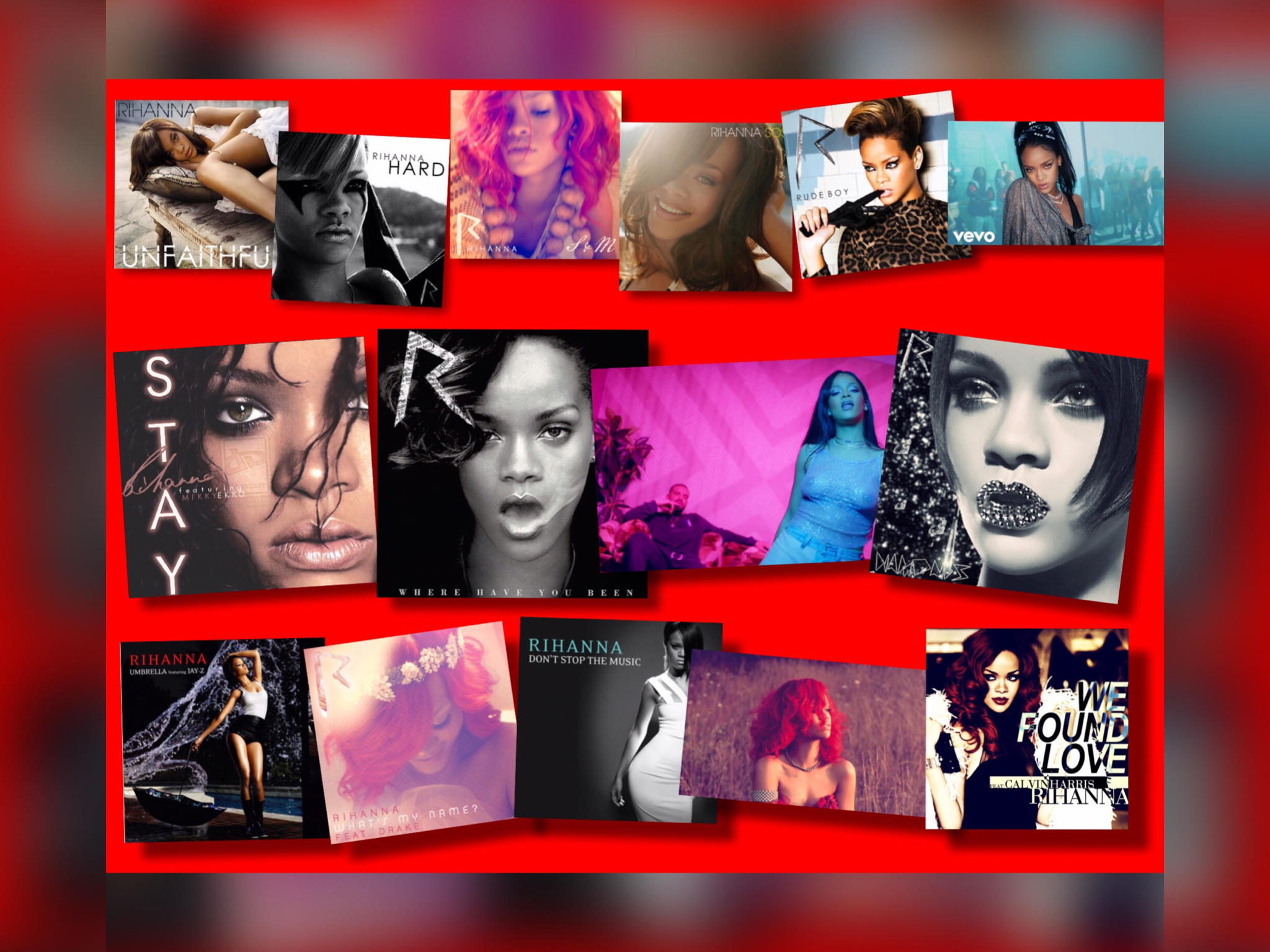 Barbadian superstar Rihanna Fenty just celebrated her 29th birthday in the best way possible – by getting her 30th top-ten hit on Billboard’s Hot 100 songs chart.  The single “Love On The Brain” – her third big hit from the 2016 album ANTI – moved into the top ten this week from #13 to #8, making her one of only a handful of acts to achieve 30 top tens.  This article commemorates that major milestone by comparing and contrasting Rihanna’s achievement against others who’ve done it and ranking all 30 of Rihanna’s top-10 hits in order from the least best to the greatest!

Rihanna’s most recent chart feat is nothing short of amazing and certainly nothing to sneeze at, despite what one may think about how easily today’s artists can rack up hits with on-demand streaming, digital sales and social media driving song popularity.  Even with those motivating forces powering modern-day music, very few artists come close to the kind of success this Barbadian wonder has had.

In fact, Rihanna is only the third act in the Hot 100’s history to achieve 30 top tens.  The fact that she does it before her 30th birthday is even more astonishing – and it bodes well for her piling on more such hits, because she’s still as relevant a force in popular music now as she was when she started 12 years ago.

Rihanna joins a couple of iconic acts in this top-ten category, and it’s worth exploring where she currently stands and how far she has to go before she ultimately becomes the record-holder.

The artist with the most top tens – male, female or group – is Madonna, who’s had 38 such songs (with only 14 of those coming before the age of 30).  By pop music’s standards, Madonna was somewhat of a late bloomer.  Her first top-ten hit occurred when she was approaching her 26th birthday (1984’s “Borderline”).  By comparison, Rihanna had already tallied 25 top tens by her 26th birthday in February 2014.

The act with the second-most, the Beatles, have had 34.  Thirty-two of those occurred before either John Lennon, Paul McCartney, George Harrison or Ringo Starr turned 30.  The two oldest Beatles, Ringo and John, each didn’t reach their 30th birthdays until months after “The Long and Winding Road” became their 32nd top ten in 1970 when the Beatles had just ended as an active group.  Notably, the Fab Four added two more top tens after the band broke up (and after all the members had turned 30): “Got To Get You Into My life” (1976) and “Free As A Bird” (1996).

But Rihanna threatens both of those iconic acts with the third-most top-ten singles as “Love on the Brain” joins her 29 other upper-decile hits.  In fact, the versatile singer, whose first top-ten single (2005’s “Pon De Replay”) happened when she was only 17, turned 29 just one day before Billboard announced this week’s new list – making this a very special birthday occasion for the superstar.

Fourteen of Rihanna’s songs have gone all the way to #1 on that chart, including last year’s “Work” (also from ANTI), which topped the chart for nine weeks and was named the biggest song by a female in 2016 – fourth biggest 2016 single overall.  In the process, “Work” made Rihanna the only artist – male, female or group – to have seven consecutive albums generate at least one Number One tune on the Hot 100.

In terms of Number Ones, only Mariah Carey (18), Elvis Presley (18) and the Beatles (20) have had more chart toppers on the pop list than Rihanna’s 14.

The Beatles and Elvis are obviously no longer active, and while Mariah Carey still is, her days of generating Number One hits appear to have ended with 2008’s “Touch My Body” (unless the perennial “All I Want For Christmas” can somehow muster up enough holiday cheer to top the Hot 100 during one of its annual December-January sleigh rides up the chart).

Thus, Rihanna is clearly in an exclusive club when it comes to her chart accomplishments, whether counting her top-ten hits or those that managed to climb all the way to Number One.  There are a couple of key asterisks worth exploring, however, before we get to that Rihanna countdown of those 30 big hits.

One of Rihanna’s top tens was a collaboration with Sir Paul McCartney in 2015 with the song “FourFiveSeconds,” for which the two singers teamed with rapper Kanye West.  That song became the first top-ten for McCartney since before Rihanna was even born (his last prior top-ten was “Spies Like Us” in 1986).  I raise this point because one could argue that McCartney deserves mention in this special top-ten club for his collective Beatles and post-Beatles offerings.

If one considered his total output of singles, both with and after the Beatles, then Sir Paul actually has 57 top tens, giving him the most of anybody (with 34
of those happening before his 30th birthday in June 1972, and 32 of those being with the Beatles).

Similarly, I could add Michael Jackson to this discussion.  The late King of Pop had 29 top-ten hits before his 30th birthday, but eleven of those were with his brothers as either the Jacksons or the Jackson 5.  It’s worth noting that Michael had a pretty significant head-start as his first three top tens occurred when he was just eleven years old.

And Michael’s total would arguably include his contribution to the charity collective USA For Africa and the #1 single “We Are The World,” which he co-wrote and on which he had multiple singing parts.

For the record, Michael added nine more top-ten singles after his 30th birthday, for a total of 38.  But if you subtract those eleven hits with his brothers, then Michael falls just short of the 30 mark with 27.

To the contrary, Rihanna has received name credit on all 30 of her top tens, with only five of those singles referring to her as a featured act – and even on those five she’s had crucial singing parts (e.g., would Calvin Harris’ “This Is What You Came For” have been as successful without Rihanna’s vocals or name being attached to it?).

So the hits just keep on rolling for Ms. Fenty, and there appears to be no end in sight for this artist who hasn’t missed the top ten in the 12 years since her début in 2005.  Now, with the ascension of “Love On The Brain” in 2017, this makes it 13 consecutive years of top-ten singles, a feat no other artist has ever accomplished!

It is with that in mind that djrobblog celebrates Rihanna’s latest amazing chart feat with a ranking of those 30 top-ten hits, in order from 30-1 in countdown fashion.

To be eligible for this list, the tune simply had to reach the top ten on Billboard’s Hot 100 singles chart.  That basic rule excludes her popular non-top-ten songs like the crass “Bitch Better Have My Money” or the domineering “Shut Up And Drive,” or even the cheekily titled duet with Shakira, “Can’t Remember to Forget You,” all of which coincidentally stopped at #15 during their respective chart runs.

Some deference and heavier weighting are given to those Rihanna tunes that went all the way to Number One, but that doesn’t mean that a very good and enduring non-Number-One hit couldn’t place high on the countdown.

So with all the formalities out of the way, let’s get to the business of counting down Rihanna’s biggest hits.  Check out the countdown below and see which of your favorite Rihanna songs helped make her one of the biggest artists in music history, and where those tunes rank on this special djroblist.  You can also hear all of those songs in this special Spotify playlist.