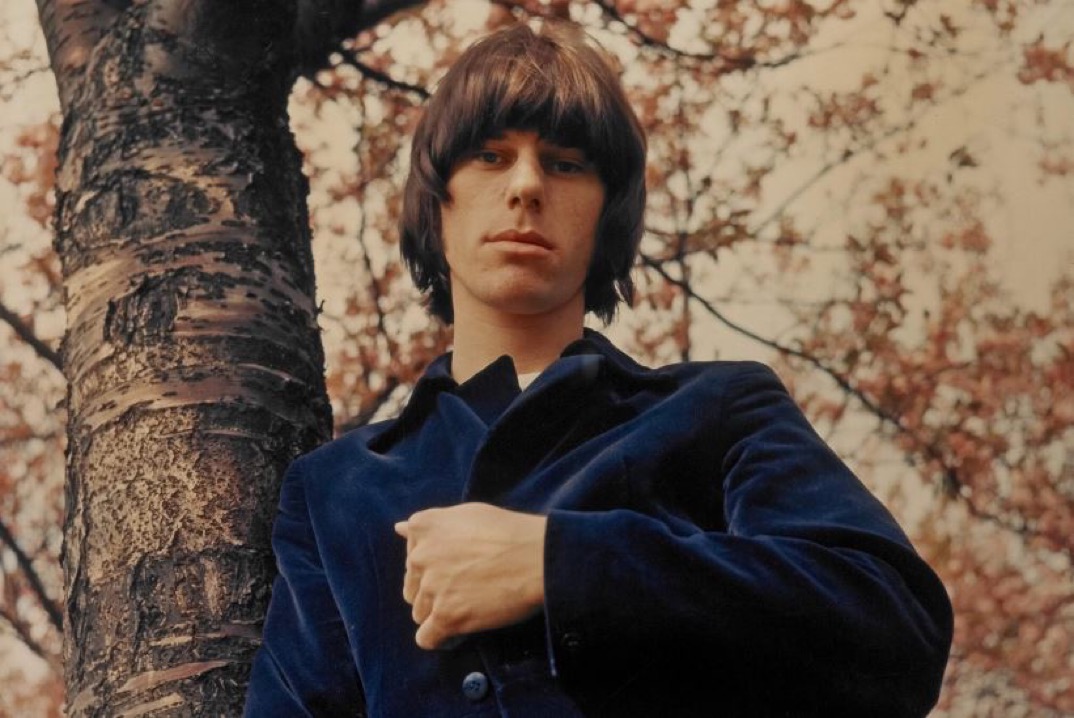 (January 12, 2023).  Perspective changes with time.  Maturity and knowledge have a way of altering our world views on subjects we thought we had already mastered, or at least fully understood.

Sometimes it takes an artist’s death—and a subsequent deeper dive into that artist’s legacy—to provide the better perspective on his or her contribution to their art… the term “better,” of course, being a matter of, again, one’s perspective.

This phenomenon has been shown over and over again, including in the past year following the deaths of artists like Mickey Gilley, Christine McVie and, most recently, the late Anita Pointer.

Perhaps this is why, after having earlier in my blogging days (in 2016) ranked the 50 greatest musicians that were members of more than one band, and having placed legendary blues-rock guitarist Jeff Beck at a dubious No. 14 on that list, I now believe—with added perspective today—that he should’ve been ranked higher.

After all, Beck had been a prominent member of not one but two Rock Hall of Fame bands—the 1960s group The Yardbirds and his self-named band, the Jeff Beck Group, plus two other supergroups that I’ll get to later.

Jeff Beck died unexpectedly Wednesday, January 11, after reportedly contracting “bacterial meningitis.”  He was 78.  Poignant tributes by fellow legends like Paul McCartney, Rod Stewart, Stevie Wonder and others have been pouring in since the news broke that evening.  And deservedly so.

Easily one of the most prolific and influential guitarists of all time, Beck—born in Wallington, Surrey, England as Geoffrey Arnold Beck on June 24, 1944–earned eight Grammy awards to go along with his two-time Rock and Roll Hall of Fame induction. He earned nine gold or platinum sales certifications in the U.S. alone and most recently released his 17th and final studio album, titled 18, with Johnny Depp in 2022.

But calling a seventeenth album 18 isn’t the only questionable number associated with Beck. There’s that dubious, pesky No. 14 ranking on my blog’s list of the greatest two-band (or more) musicians, done seven years ago.

Yardbirds bandmates Eric Clapton and Jimmy Page were ranked even higher on my list thanks to their own legendary multiple-band memberships, and understandably so given their immeasurable contributions to, and influence on, rock music for decades.

Actually, referring to Clapton as Beck’s “bandmate” would be inaccurate since Beck replaced Eric in the Yardbirds in 1965, just before the band released their most successful single, “For Your Love” (Billboard No. 6, June 1965), and then followed that with a string of other hits and rock classics.

And that’s where new perspective starts to set in.

One could argue that Clapton—a three-time RRHOF inductee and largely considered the greatest rock guitarist of all time and, again, understandably so—should only be in the Rock Hall of Fame twice: for his Cream and his solo work, not for his time in the Yardbirds.  He wasn’t a Yardbirds founding member and his time with the band ended after one album and prior to the band entering its most successful and influential period.

Clapton played lead guitar on seven of the eleven songs on The Yardbirds’ first album, 1965’s For Your Love, including the hit title track and some others now considered classics, like “I Wish You Would” and “I Ain’t Got You.”  Beck played on the others.

But it was Beck who played on the studio portion of their next set, 1965’s Having a Rave Up, which included their second-biggest and, arguably, most influential hit, “Heart Full of Soul.”  His introduction of the song’s Indian sitar-like effect by using a fuzz device on his guitar riffs was pioneering at the time and is now legendary (it pre-dated by months the Beatles’ popularization of the sound on their “Norwegian Wood” later in ‘65).  It was a technique Beck perfected on future hits like “Over Under Sideways Down.”

Beck would go on to play lead guitar on all the tracks on the Yardbirds’ third studio album, 1966’s Over Under Sideways Down (released as Yardbirds in the U.K.). He was later joined (and ultimately replaced) by Jimmy Page before the latter went off to do even bigger and better things (with a little band known as Led Zeppelin).

The Rock Hall of Fame has historically parsed band memberships when deciding which contributors should be honored and which shouldn’t.  It’s how Temptations replacement singer Dennis Edwards got in when that group was inducted in 1989, but other replacements, like Richard Street and Glenn Leonard didn’t, despite the latter two having had moderate success (including recording their iconic rendition of “Silent Night” in 1980) with the Motown legends.

Similarly, the legendary band Fleetwood Mac’s inducted members include the classic lineup of five (Mick Fleetwood, John McVie, Christine McVie, Lindsey Buckingham and Stevie Nicks), plus founding members Peter Green and Jeremy Spencer, along with Danny Kirwan, but not the highly productive Bob Welch (with the band from 1971-74 before Buckingham and Nicks joined).  One could argue that Green, Spencer and especially Kirwan were no more deserving of induction than Welch, given the band’s obscurity during its early days.

A similar scrutiny of The Yardbirds’ most productive period might find that Clapton, while an influential guitarist at the time and the one who played on their biggest hit, “For Your Love” (and the one who personally suggested that Jimmy Page, not Jeff Beck, replace him when he left the band only 17 months after joining it), might not be so deserving of that first RRHOF nod in 1992.

Okay, maybe a tribute to Beck that comes at Clapton’s expense is moving into blasphemous territory (Clapton is a guitar god; there I’ve said it!), besides it’s an RRHOF induction that did not come at Beck’s expense, making this whole point admittedly moot and perhaps a tad petty.

But it is Beck that was arguably short-changed in my blog’s earlier ranking of multiple-band musicians when I placed him at 14 (Clapton was ranked No. 4, while Page was at No. 3).

My reconsideration of Beck’s standing on the list is especially epiphanic when noting that it was another Jeff Beck Group member that outranked both Clapton and Page at No. 2 (you’ll have to read the article to see who ranked in the top two positions and why).

But Beck could easily have been in the top ten of that list, maybe even the top five.  In retrospect, the rankings were largely influenced by a pop-minded perspective; one that, admittedly, lent weight to the number of bands a person had performed in and the gravity of each group’s success.

Smaller consideration was given to the less tangible factor of “influence,” which is obviously a more subjective criterion and one that is harder to measure.  It’s much easier to count the number of chart-topping albums Beck’s brief Yardbirds bandmate Jimmy Page had with his future band, Led Zeppelin, than it is the number of guitarists whose styles emulate Beck’s.

The artist at No. 1 on that list, again, read it to find out who that is, has had more chart-topping albums and singles than any other musician, counting output from both his first and his second bands (heck, even just using the first one), so his placement at the top of the list is understandable.

Beck’s bands never had number one singles.  His albums, either with Yardbirds or separately, never topped the albums charts here in the U.S. or in the U.K.

But his influence and his legacy is immeasurable.  He was a master of the guitar riff, often singlehandedly powering songs with his playing.  Singers on his records would find themselves competing with his instrument, while he pushed the confines of standard song structure.

But he could also be tender, as he was on Stevie Wonder’s “Looking For Another Pure Love” from 1972’s classic Talking Book album.  Beck’s playing on that record was strikingly melodic, perfectly caressing Stevie’s vocals, and weaving in and out and around the song’s complex chord structure.  His exceptional play during the bridge even prompted Stevie’s “Do it, Jeff!” encouragement, which was left in the final mix, (and you can hear just below).

I’m sure there are many more intangibles I could find that pay tribute to Beck’s greatness, or that create the need to reassess his place on the Top 50 multi-band artists list.

But even when using the list’s original criteria and tangibles like the number of bands an artist played in, Beck was shortchanged.

Specifically, I failed to factor in the two other supergroups he played in post-Yardbirds.  Those would be Beck, Bogert and Appice (consisting of Jeff, Tim Bogert and Carmine Appice, the latter two who played with Vanilla Fudge and Cactus, respectively), and the Honeydrippers (featuring Beck with former Yardbird Jimmy Page, plus Robert Plant of Led Zeppelin, Paul Shaffer of “Late Show with David Letterman” fame, and Nile Rodgers of Chic).

Both of those bands were short lived, but the latter did give Beck the biggest chart hit of his career, 1984’s “Sea of Love” (although it was Page, not Beck, who played guitar on that song’s bridge).  “Sea of Love,” a remake of an old Phil Phillips 1959 hit, peaked at No. 3 on the Billboard Hot 100 in January 1985.  Beck did play guitar on the group’s followup top-40 single, “Rockin’ At Midnight.”

The Honeydrippers (and Beck, Bogert and Appice for that matter) were just a small part of a long journey that saw Beck release 17 albums on his own (counting those with Jeff Beck Group) during his post-Yardbirds days.

The biggest of those was 1974’s Blow By Blow, an instrumental set that peaked at No. 4 on the Billboard 200 albums chart and was certified platinum.  It was on that LP that Stevie Wonder returned the favor (after 1972’s “Another Pure Love” contribution by Beck) and gave the rocker two songs written by the Motown genius: “Cause We’ve Ended As Lovers” and “Thelonius,” the latter on which Wonder played clavinet (you can hear that funky jam in the audio clip below, followed by a live performance of the album’s best track IMHO, the jazzy “Scatterbrain”).

These are the kinds of liaisons that Beck was able to forge during his stellar career…undergirded by a level of respect few other musicians of any genre have earned before or since.

It is my late understanding of the level of his undeniable influence, his partnership with others, and his overall contribution to modern music that makes the No. 14 ranking on my earlier list so questionable.

But that’s what makes bloggers’ GOAT rankings, award show honors, and hall of fame inductions so subjective, mostly serving as fodder for debate by bloggers, fans and so-called experts.

Thankfully, Jeff Beck was likely spared the indignity of ever seeing this blogger’s blunder, one can presume.

Perpetual rock music learner DJRob (he/him/his) is a freelance music blogger from somewhere on the East Coast who covers R&B, hip-hop, pop and rock genres – plus lots of music news and current stuff!  You can follow him on Twitter at @djrobblog.