Skip to content
I Can’t Believe That Song Is 40! I Don't Get It - or Maybe I Do Pop Stuff Trivia You Can Use Uncategorized

These or This? “Sweet Dreams (are made of …).” The old debate was reignited and settled this week…or was it? 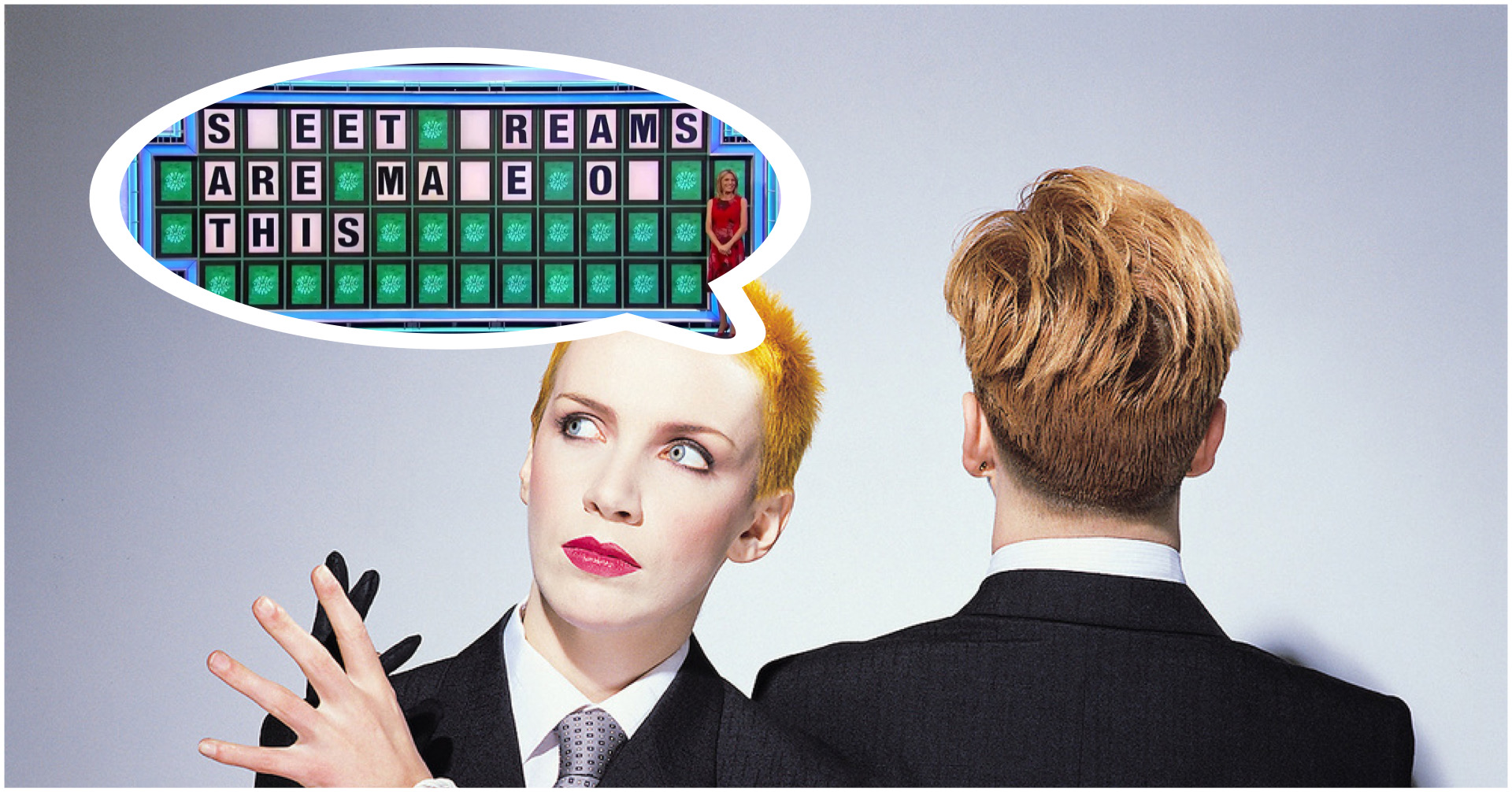 When Wheel of Misfortune contestants were given nearly every letter of a Song Lyrics puzzle earlier this week—the title line to the Eurythmics No. 1 synth-pop classic “Sweet Dreams (Are Made of This)”—all one had to do was essentially read what was on the board to solve it…particularly the last word, which was the only one completely spelled out.

When he decided to solve, contestant Chris Bryant gave the following answer: “Sweet dreams are made of THESE” (emphasis added), even with the word “this” right there in front of him!

He instantly knew he’d f*ed up before host Pat Sajak could politely (and perhaps empathetically… I’m picturing Sajak rocking out to this tune back in the day) tell him he was wrong.  The next contestant, of course, read what was on the board and got the puzzle correct.

And with that now-famous flub, which Billboard equated to “missing a linguistic lay-up” and Twitter trollers had a field day with for the next 48 hours, the old debate was revived of what exactly Eurythmics lead singer Annie Lennox was crooning when she and bandmate Dave Stewart recorded the hit nearly 40 years ago. Here’s a video of Carson Daly playing back and discussing the issue on Today the next morning.

Bryant’s defenders, the ones who ignore the rule-of-thumb of “just read what’s up there,” emphatically pointed out their belief that Lennox’ very clearly sings “these” in the iconic tune, despite “this” appearing in the song’s parenthetical sub-title.  They support their claim by noting she rhymes the word “seas” two lines later, as shown below:

“Sweet dreams are made of THESE, who am I to disagree?  I’ve traveled the world and the seven SEAS.  Everybody’s looking for something…”

Well, “these” and “seas” certainly rhyme, and it follows that the “long E” sound is consistent with the last word of the intervening line, “disagree.”  So the rhyming cadence goes “these,” “disagree,” “seas”… “something.”  (I’ll come back to “something” in a moment.)

But those who argue that it’s “these” and not “this” are ignoring two very important facts: 1) the word “this” is in the song’s title (and always has been), and 2) see Number One.

When I listen to Lennox’s line, I clearly hear her sing, “sweet dreams are made of thee-is” and I always chalked it up to either her Scottish accent or the super-talented singer using her artistic freedom to turn the word into a two-syllable one, elongating it so that it more closely matches the next lines.

But I’ve never thought she was singing “these” (okay, maybe once or twice before I saw the song’s actual title on the record, which I purchased in the summer of ‘83… yeah, I was one of those who helped send it to No. 1 here in America that year).

But on closer listens (in the more than 400 times I’ve heard the song over the past 39 years), it’s clearly “thee-is” and not “these” Lennox is singing.  Granted, “thee-is” isn’t “this” either, but it’s closer to “this” than “these,” and as we all know, it’s where you finish, not where you start, that matters most.

So while conspiracy theorists on Twitter have accused Wheel of Fortune of taking the liberty of changing the Grammy Hall of Fame song’s lyrics (and title) after four decades of ubiquity, its worth noting that Wheel of Fortune may be many things, but it’s not that brazen.

And, for those who believe that errant contestant Chris Bryant may have been trying to make a statement by casting his own vote on what he believed to be the actual pronunciation of the lyric for all these decades (although he did appear to be younger than the song itself), I’d say it’s hard to imagine anyone intentionally missing out on hundreds and maybe thousands of dollars to make such a point (Bryant eventually advanced to the Bonus Round and banked more than $26k in prizes, so he’s redeemed).

And, finally, regarding the rhyming cadence at the end of each of the four main lines, did anyone ever question the fact that “something” doesn’t rhyme with either “these” or “this” (or “disagree”), thereby rendering the whole “it had to be ‘these’ because it rhymes” argument kind of moot.

Well anyway, at least it wasn’t a “paddle boat,” which came a day later on Wheel…

Or “another feather in your map,” which happened earlier this month on the show that seems to be having a lot of these “misfortunes” lately.

2 thoughts on “These or This? “Sweet Dreams (are made of …).” The old debate was reignited and settled this week…or was it?”