The “We❤️NYC” concert on CNN: Don’t call it a double standard…not even close. 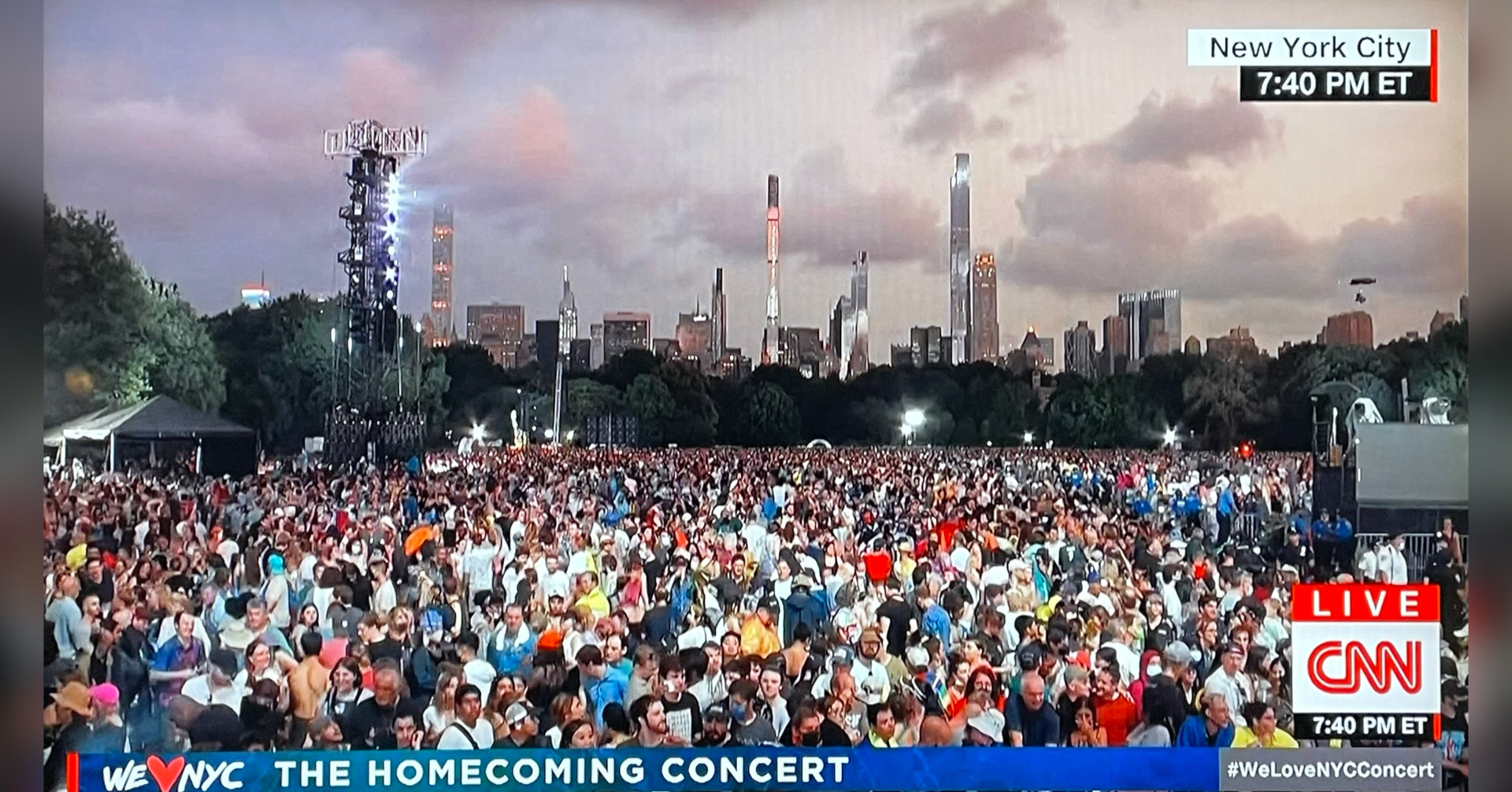 (August 22, 2021).  And you thought that Barry Manilow being preceded on the same stage by rapper Polo G would be the biggest meme coming out of Saturday’s (Aug. 21) half-successful attempt to conduct a music festival in Manhattan’s Central Park…in the middle of a pandemic and with a hurricane lurking nearby in the Atlantic.

Polo G, whose one-song set featured the emerging hip-hop star shout-rapping over a recorded track in which his normal octave was clearly audible, immediately preceded a spry Manilow who launched with “Copacabana,” a song he recorded two decades before Polo was born. New Yorker Manilow himself was slightly off-pitch but clearly enthused about performing in front of his hometown crowd. Manilow’s medley of hits continued with “Mandy” followed by “Can’t Smile Without You.”

But after organizers pulled the plug on the doomed We Love NYC: The Homecoming Concert just after the two-and-a-half hour mark and only minutes into Manilow’s set due to impending weather, critics – particularly those who don’t like CNN’s coverage of politics – ramped up their criticism of the network and those responsible for holding such an event in the first place.

Nope, instead it was an opportunity for conservative critics to take swipes at CNN and the concert planners by likening the event to recent high-profile Republican-favored gatherings like various Trump rallies and, more notably, the Sturgis motorcycle rally in South Dakota – a proven spreader event held last year and again earlier this month to not-so-great results regarding the Covid-19 virus.

More specifically, conservatives are calling the Democrats’ criticisms of such events a double standard, and they’re using Saturday’s ballyhooed NYC festival as evidence.

Although the images of tens of thousands of concert revelers closely gathered while singing at the tops of their lungs certainly aren’t the kind you’d expect to see in a worsening pandemic – especially on the very news network that has touted itself as the voice of reason for all things Covid during the past 18 months – what took place in NYC Saturday and the network’s fervent endorsement of it do not constitute a double standard.

The first and most important difference between NYC’s Central Park concert and the Sturgis’ biker gathering is that the concert was a vaccine-required event held in a city with a relatively higher vaccination rate and low Covid cases.  Yes, the concert attendees were largely maskless – just like the Sturgis folks – but they also aren’t actively denouncing the vaccines and likely have acknowledged that the likelihood of survival from Covid is higher for those who are vaccinated than those who are not.

The number of rally goers at Sturgis (reported as up to 700k) also dwarfed those at Saturday’s concert (roughly 60k).  And while the jury is still out on whether the NYC concert will cause an increase in Covid cases, it’s already been documented that the number of cases in South Dakota have increased more than 200% in the wake of Sturgis (one couple even documented their experience of attending the rally with Covid on their Facebook page).

Contrast the NYC concert with what took place in Alabama this weekend at a rally for former president Donald Trump.  At the largely maskless rally, not only did attendees shun getting vaccinations, but they practically booed their leader when he suggested they should.  Add to the list of this weekend’s ironies the fact that even when Trump tries to be the voice of reason regarding the pandemic, his followers turn a deaf ear.

The best argument one could make about NYC is that the concert sets a bad example to follow during a relentless pandemic that shows little sign of letting up.  One could argue – as federal officials now talk of a booster shot being required as the earlier vaccine doses become less effective – that relying on previous vaccinations as a fool-proof strategy for ensuring attendees’ safety at a large gathering with no social distancing is dubious at best.

But it is not a double standard for the reasons already explained.  And if the results are anything like the similarly controlled, non-super-spreader Lollapolooza event in Chicago last month, it will continue not being one.

Now trying to fool with Mother Nature?   That may be a different story.  With knowledge of the first major named storm to hit the northeast since 2012’s Hurricane Sandy taking aim at NYC, perhaps organizers should’ve thought about pulling the plug earlier.  But thankfully, outside of a drenched group of people who lingered on the park grounds, there were no real consequences or injuries reported from that decision either.

But there were several ironies – and a few fun TV moments – emerging from the storm-doomed concert and the timing of its cancellation.  For instance, Barry Manilow’s cancelled set was to include his last top-10 pop chart hit, “I Made It Through The Rain,” which reached the top ten 40 years ago.

Manilow later joined CNN by phone with Anderson Cooper and serenaded the giddy anchor with a few lines of the hit song, essentially making Manilow the unlikely face of the cancelled concert for millions of viewers.

It even prompted this meme from yours truly (in recognition of Diana Ross’ more triumphant handling of the elements at a free Central Park concert in 1983).

I guess I could also point out that Manilow’s tune shared top-10 space with Eddie Rabbitt’s country classic “I Love A Rainy Night” or that the No. 1 song that week was Blondie’s “The Tide Is High,” in recognition of the torrential downpours, full-moon and high tides expected on the Atlantic coast Saturday as NYC braced for flooding of epic proportions, but that might be carrying things a little too far, sort of like comparisons of the We❤️NYC concert to any number of maskless, non-vaccine-required events held during the past two years.