Skip to content
Featured Artists In Memoriam... Pop Stuff Rock Music Fix Trivia You Can Use

How the late Eddie Van Halen’s generosity helped prevent his band’s biggest album from reaching No. 1 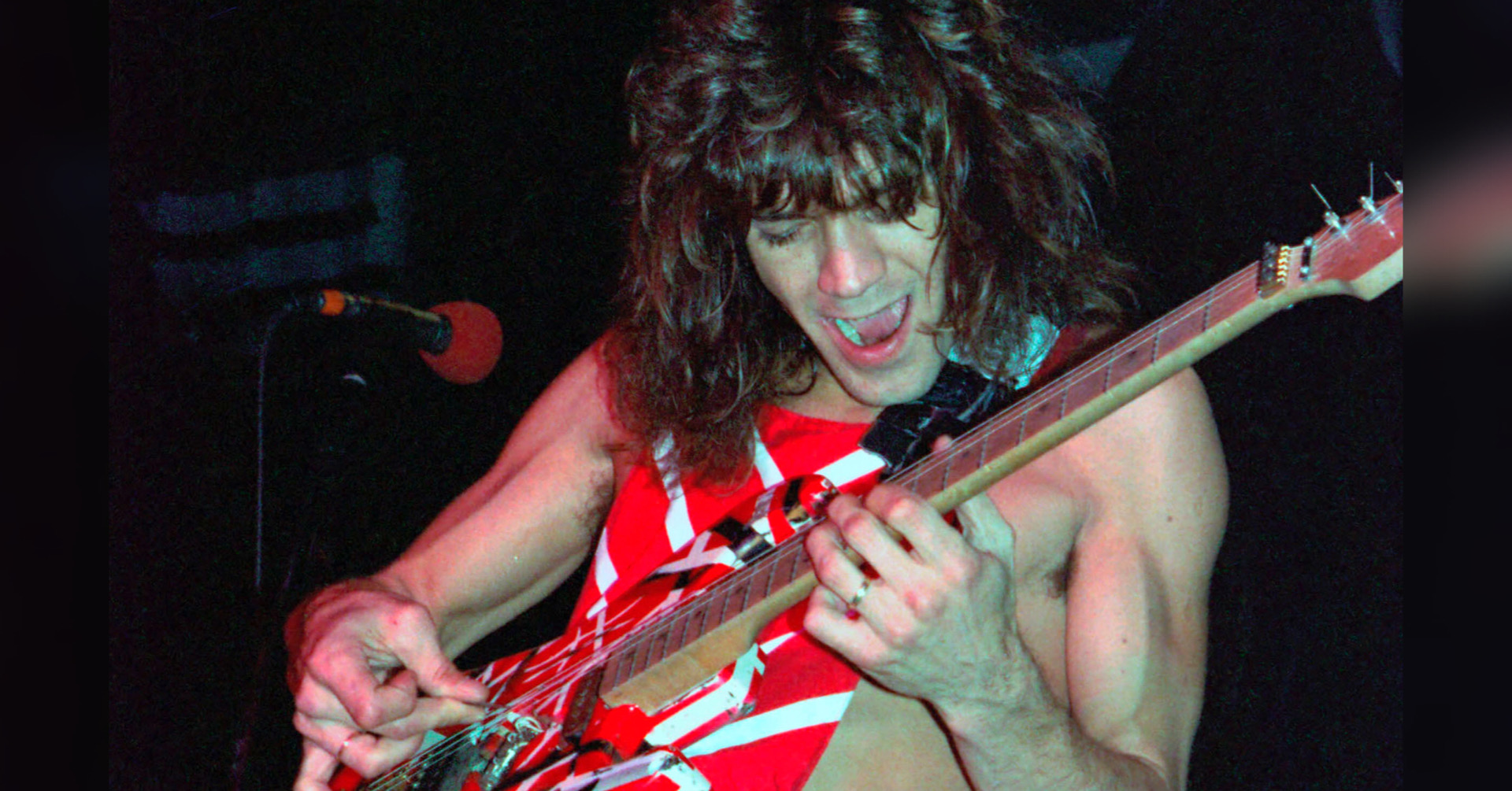 (October 7, 2020).  The death of iconic guitar god Eddie Van Halen from throat cancer Tuesday sent shockwaves throughout the music industry.  It also sparked many deserving tributes from artists of different generations and different walks of life whose careers he influenced or who otherwise appreciated the legendary guitarist’s virtuosity and his musical genius.

His eponymous band Van Halen – one he started with older brother and drummer Alex Van Halen and which included original bassist Michael Anthony and a variety of lead singers, most notably David Lee Roth and Sammy Hagar – recorded more than a dozen multi-platinum albums…all powered by Eddie’s guitar.

As one friend put it, he popularized playing techniques that became rites of passage for any guitar player worth his weight in salt.  People often point to the 1:43 minutes of “Eruption” (from the band’s self-titled 1978 debut album) as his masterpiece, with many guitarists attempting to mimic Eddie’s famous tapping technique as they try – mostly in vain – to approach his guitar shredding greatness.

That debut album, Van Halen, was one of the band’s two diamond-certified LPs (certifying at least ten million copies in shipments/sales).  The other was their sixth LP, 1984 (MCMLXXXIV), which in its namesake year catapulted the band to its highest chart heights up to that point and landed them squarely into the pop mainstream.

In fact, each of the band’s first six releases including 1984 had reached successively higher chart peaks even while Van Halen was struggling to score hit singles at pop radio.  They achieved album success primarily because of their reputation as bonafide hard rockers with Eddie’s undeniable guitar riffs, which drove sales without the need for mainstream radio hits (they did just fine with album rock radio, thank you).

When the year 1984 began, Van Halen was primed for its major pop breakthrough.  That January, the upbeat guitar-and-synth heavy single “Jump” was unleashed to pop radio to immediate acceptance and flew straight to No. 1 where it spent five weeks.  Its parent LP 1984 was poised to do the same on the album chart when it was issued two weeks after the single.

But, as fate would have it, by the time the year 1984 concluded, only five albums had spent time at the top of the Billboard LP chart – and ironically Van Halen’s calendar-inspired 1984 wasn’t one of them.

By the way, those five No. 1s – in chronological order – were Michael Jackson’s Thriller, the Footloose soundtrack, Sports by Huey Lewis & the News, Bruce Springsteen’s Born In The USA, and Prince & the Revolution’s Purple Rain…just five albums topping the chart from that January through December,  thus making 1984 the year with the fewest No. 1 LPs in history – a record that stands to this day.

So why was an immensely popular album by the hottest rock band in the country with the No. 1 single in America (plus three strong follow-ups in “Panama,” “I’ll Wait” and “Hot For Teacher”) and a title specifically named for its year of release unable to reach No. 1?

Well, part of the reason would reside within the band itself – and rested squarely on Eddie’s generous shoulders.

About a year and a half earlier in 1982, Eddie had been requested by producer Quincy Jones to provide a guitar solo on a track for Jackson’s upcoming Thriller album.  The song was “Beat It,” a post-disco, dance-pop number with a rock edge that the legendary producer found deserving of a clinching solo by a credible guitarist.

Enter Eddie who was actually the second choice (Pete Townsend of The Who had turned down the initial offer).  But EVH agreed to do it and went into the studio, laid down his solo and even suggested altering the song’s structure a bit to accommodate his contribution, to which Quincy – and ultimately the song’s writer, Michael Jackson – agreed.

What resulted was the famous, searing guitar solo that comes after the first breakdown during the bridge that sets up the third and final chorus of “Beat It,” one that no doubt contributed to the song’s (and the album’s) enormous No. 1 success (the video and MTV also helped, of course).

“Beat It” would be released in February 1983 as the third single from Thriller – after “The Girl Is Mine” and “Billie Jean” (before the latter even completed its climb to No. 1).  As both “Billie Jean” and “Beat It” climbed the charts, Thriller moved into the No. 1 spot on the album chart en route to becoming the longest-running No. 1 album since the 1960s (a distinction it still holds to this day).

For his contributions, Eddie Van Halen (along with wife “Valerie Van Halen”) received a thank you from Michael along with a couple of mentions in the liner notes of Thriller.  That’s it.  No financial compensation for what ultimately became the biggest selling album of all time worldwide.

So successful was Thriller that its No. 1 run extended into the first four months of 1984.  And it was then that the band Van Halen got to experience the same wrath that so many great albums had succumbed to the year before (albums by the Stray Cats, Journey, Def Leppard and Culture Club all peaked at No. 2 behind Thriller).

For three weeks in March 1984, while “Jump” was still riding high on the singles list, the album 1984 rose to No. 2 behind Thriller.  By the time Thriller’s No. 1 run ended in April, the Footloose soundtrack had moved in and held 1984 at bay for two more weeks – giving it a total of five weeks in the runner-up spot – never to reach No. 1.

But 1984 – both the album and the year – would mark a turning point for the group.  After the album’s success, lead singer David Lee Roth left the band to pursue a solo career.  Van Halen hired ear-splitting rocker Sammy Hagar to replace him and the “Van Hagar” era would begin with their next LP, 5150.

It may have been coincidence that Van Halen’s next four studio albums – 5150, OU812, For Unlawful Carnal Knowledge and Balance – all accomplished what 1984 couldn’t – they all reached No. 1 on the LP chart.

Of course, none of them had a Michael Jackson album to contend with – or another artist’s album featuring pro bono guitar work by Eddie.

The group Van Halen went on to have six No. 1 albums in all, including a greatest hits compilation and a live album – both in the 1990s.  So they weren’t lacking for any credibility, charts or otherwise.  Interestingly, their six No. 1s combined for certified sales of just 22 million – 12 million fewer than their first six non-No. 1 albums.

And but for Eddie’s generosity to one would-be King of Pop and the greatest selling album of all time, Van Halen’s most commercially successful album 1984 might have also been its first No. 1.

There is some redemption in this story. During its final week at No. 1 on the singles list, Van Halen’s “Jump” did manage to hold off a song featuring Michael Jackson’s uncredited vocals at No. 2: Rockwell’s “Somebody’s Watching Me.” And, by the time “Jump” finished its reign, it was Kenny Loggins’ “Footloose” that kept Rockwell and Michael at bay for another two weeks, just like its parent soundtrack album had done 1984.

“Jump” also became the band’s one and only entry on the Billboard soul chart where it peaked at No. 88 in April 1984.

3 thoughts on “How the late Eddie Van Halen’s generosity helped prevent his band’s biggest album from reaching No. 1”