Skip to content
Featured Artists In Memoriam... Pop Stuff R&B Music Commentary Trivia You Can Use 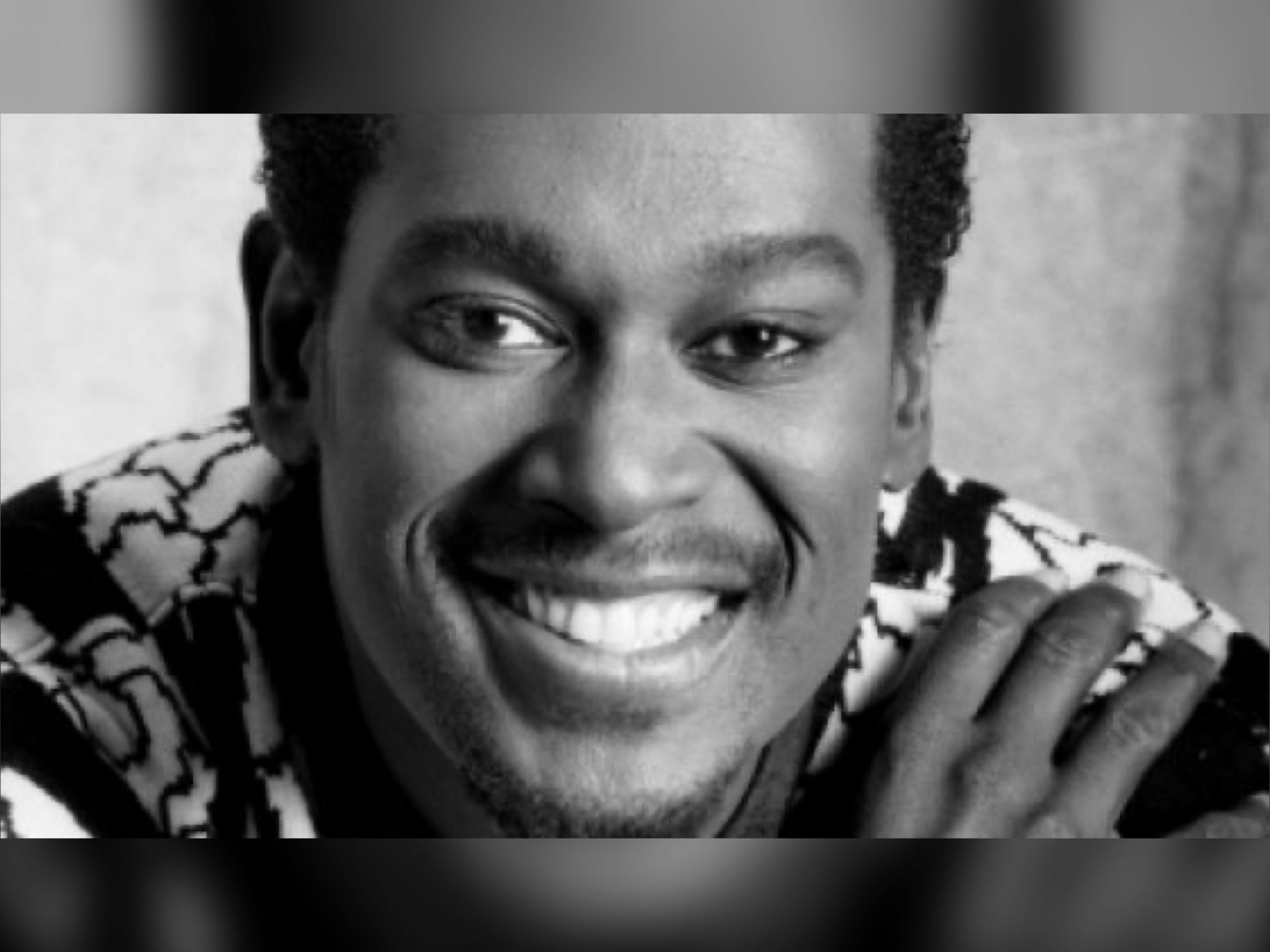 Fifteen years after his untimely death at age 54, we still remember the man and his vast musical legacy.  For more than 30 years, Luther wowed us with that velvety smooth tenor and baritone voice, the one that graced hundreds of songs from 1975 to 2005…the one DJROBBLOG commemorates with this anniversary tribute.

Having worked his way from the humblest of beginnings, Luther put in his dues while taking bit jobs (a stint on the fledgling Sesame Street TV program, a commercial jingle singer, and a backup singer for many other artists – David Bowie, Chaka Khan and Chic among them) while becoming a prominent lead vocalist in his own right (first in his own group Luther, then on a Bionic Boogie album and later with the group Change).

Luther honed his craft before setting the R&B world ablaze with his solo debut album in 1981, Never Too Much, which topped the Billboard soul album charts and generated a No. 1 soul single in its title track.

And Luther Vandross never looked back!

He want on to sell millions of albums, began crossing over to the pop charts, although he never achieved that elusive No. 1 single on the Hot 100 – something he admits drove him throughout his career.

Fifteen years after his passing, DJROBBLOG commemorates Luther’s career and his legacy with a look back at his 15 most career-defining moments…in chronological order:

Luther Vandross’ first big break was when he was asked to sing – along with his group Listen My Brother – on the first episode of the children’s learning program Sesame Street, which aired in November 1969 when Luther was just 18 years old.  Here’s footage of Luther and Co. teaching kids to count to 20.

In 1974, Luther Vandross was introduced by guitarist Carlos Alomar to legendary British singer David Bowie, who was recording his 1975 album Young Americans.  Bowie was so impressed with Vandross’ impromptu singing that he invited him to do background vocals on the title track.  Luther not only sang but arranged the backing vocals.  He quickly became one of the most sought-after background singers, contributing to sessions by such artists as Roberta Flack, Bette Midler, Ringo Starr, and Chaka Khan.  Check out this footage of David (and Luther) singing “Young Americans.”

Three.  Luther and his group, Luther.

In 1976, Luther formed the group bearing his first name.  They were signed to Atlantic Records’ Cotillion imprint, where they recorded two albums that failed to chart: Luther (1976) and This Close To You (‘77).  The track “It’s Good for the Soul” was Luther’s first single, but the one fans most remember is the original version of “The 2nd Time Around,” which Vandross re-recorded as the closing track on his 1988 Any Love album as a refashioned “The Second Time Around.”  Here’s a clip of the original.

Luther Vandross could have made a career singing in ads.  In the mid-to-late 1970s, he sang commercial jingles for such popular consumer brands as Kentucky Fried Chicken (now just KFC), Pepsi Cola, and the US Armed Forces – among many others.  These gigs made him a nice living even before he launched his solo career in 1981. But they were clearly just the tip of the iceberg.

The legendary disco band Chic – led by Rock and Roll Hall of Famer Nile Rodgers and partner Bernard Edwards – commissioned Vandross to contribute background vocals on their self-titled debut album in 1977.   Luther’s distinctive tenor can be heard most prominently on the songs “You Can Get By” and “Strike Up the Band,” although he also sang on the classic singles “Dance, Dance Dance (Yowsah, Yowsah, Yowsah)” and “Everybody Dance.”  Here he is with Chic on “You Can Get By” (with lead vocals by the late Bernard Edwards).

After his own group Luther didn’t work out, Vandross contributed lead vocals to yet another act, Gregg Diamond’s cheekily named Bionic Boogie.  Their most interesting recording was the original “Hot Butterfly,” which soul legend Chaka Khan refashioned into “Papillon (a/k/a Hot Butterfly)” two years later on her Naughty album.  Here’s the 1978 original by Bionic Boogie, followed by Chaka’s 1980 version, on which Luther’s backing vocals can be heard prominently.

Seven.  Luther and Change – The Glow of Love LP.

The most pivotal moment for Vandross before launching his solo career came via his brief involvement with another Atlantic Records act, Change.  That group’s debut album featured Vandross on two classic post-disco tracks: “Searching” and the title track, “The Glow of Love.”  Those two, along with the album’s biggest hit, “A Lover’s Holiday” (on which Vandross did not sing), collectively topped Billboard’s Top 100 Disco chart for nine weeks in 1980 and was eventually certified gold.  Here’s Luther on the title track.

Eight.  Luther Vandross launches his solo debut – Never Too Much.

Following the success of The Glow of Love by Change, Vandross turned down an offer to contribute to the band’s second album and, instead, launched his solo career with Epic Records.  The result was his legendary debut album Never Too Much, which included the title track as his first solo single.  Both the song and the album topped the R&B charts and the album, which also included his iconic remake of Dionne Warwick’s “A House Is Not A Home,” became his first of many platinum-certified albums.  Here’s his first single, now considered a classic, followed by a clip of his iconic Warwick cover.

In 1982, Queen of Soul Aretha Franklin’s career was in need of a jumpstart.  It had been five years since she’d had either a No. 1 R&B single or a top-40 pop one.  After the success of his debut solo effort, Vandross was busy in 1982 recording his second album.  But he wasn’t about to pass up the chance to moonlight with one of his biggest idols, who happened to be the most successful female soul singer in history.

He wrote and produced Aretha’s 1982 album, including the title track, “Jump To It,” which returned Re-Re to No. 1 on the soul chart and to the pop top 40.  He would produce her follow-up album and its title track, “Get it Right,” which also topped the soul charts.  Not stopping there, Vandross went on to produce his biggest idol Dionne Warwick’s How Many Times Can We Say Goodbye album, in which Vandross dueted with the legend on the title track.  Here’s a clip of Aretha’s No. 1 smash, followed by his duet with Dionne.

Just over a year after his debut album, Vandross released the follow-up, 1982’s Forever, For Always, For Love.  Led by the single “Bad Boy/Having a Party,” which included Luther’s rendering of the Sam Cooke classic for the medley’s second song.  “Bad Boy” returned Vandross to the top five of the R&B charts, where it was listed concurrently with his Cheryl Lynn duet, “If This World Were Mine,” itself a remake of the Marvin Gaye/Tammi Terrell classic. Here he is with “Bad Boy” on TV’s Soul Train.

Eleven.  Luther tackles the Carpenters’  “Superstar”; his ballads become his own.

After having success with “A House Is Not A Home,” “Since I Lost My Baby” and “If This World Were Mine” from 1981-82, Luther went back to the remake well for his third album, 1983’s Busy Body, in which he covered the 1971 pop smash by the Carpenters titled “Superstar” (with the memorable hook, “Don’t you remember you told me you love me, baby?”).  To unsuspecting R&B fans who weren’t familiar with Richard and Karen Carpenter’s more uptempo hit, Luther’s ballad remake (which was coupled with an interpolation of Aretha Franklin’s “Until You Come Back To Me”) was thought to be an original, further illustrating how effortlessly he was able to make a song his own.  Here’s a live clip of Vandross performing what became one of his signature songs.

Not content with teaming with just female legends, Vandross was invited to contribute backing vocals on Stevie Wonder‘s “Part-Time Lover,” the 1985 song that became his last to top the pop chart.  Vandross is featured prominently on the chorus where he scats the hook.  He even goes into a little vamp at the end of the tune as it fades out.  Take a listen below.

Thirteen.  Luther teams with the late Gregory Hines to get the second No. 1 duet on the soul chart between two male solo singers (after MJ and Sir Paul).

On Luther’s fifth solo album, Give Me The Reason, he recorded a song with Gregory Hines that established another Billboard chart milestone.  The song “There’s Nothing Better Than Love” teamed two male soloists for a duet that became the second of its kind (after Michael Jackson & Paul McCartney’s “The Girl Is Mine”) to top the R&B chart.  It had been customary for duets between male and female solo singers to reach No. 1, but rare for two males (outside of normal duos like Sam & Dave or Daryl Hall & John Oates) to do so.  Here’s the song that did it for Luther & Gregory.

As his career progressed, Vandross made it clear that topping the soul charts was not enough for him.  Reaching No. 1 on the pop singles chart with his own song was a goal and a driving force for him after years of No. 1 soul chart hits.  He never reached that goal, but he came increasingly close with his first top 20 pop single (“Stop to Love”) in 1986, his first top ten (“Here And Now”) in 1990, his first top five (“Power of Love/Love Power”) in ‘91, and his first No. 2 (a remake of “Endless Love” with Mariah Carey) in ‘95.  Close…but no cigar.  Here’s his biggest solo pop chart hit.

Fifteen.  Luther (finally) gets that first No. 1 pop album and earns his last Grammy.

After his long career with Epic Records, Vandross left the label for a brief stint with Virgin Records before ultimately signing with Clive Davis’ J Records in 2000.  He recorded a self-titled album, which did moderately well.  But the followup, 2003’s Dance With My Father, proved to be his crowning achievement.  The album, which became his first No. 1 on the Billboard 200 after 22 years of solo sets, included a poignant tribute to his own father (and mother) in the title track, which won a Grammy for Best Song as well as Best Male R&B Vocal Performance.  Here’s the official video for that award-winning tune.

We still miss you, Luther!