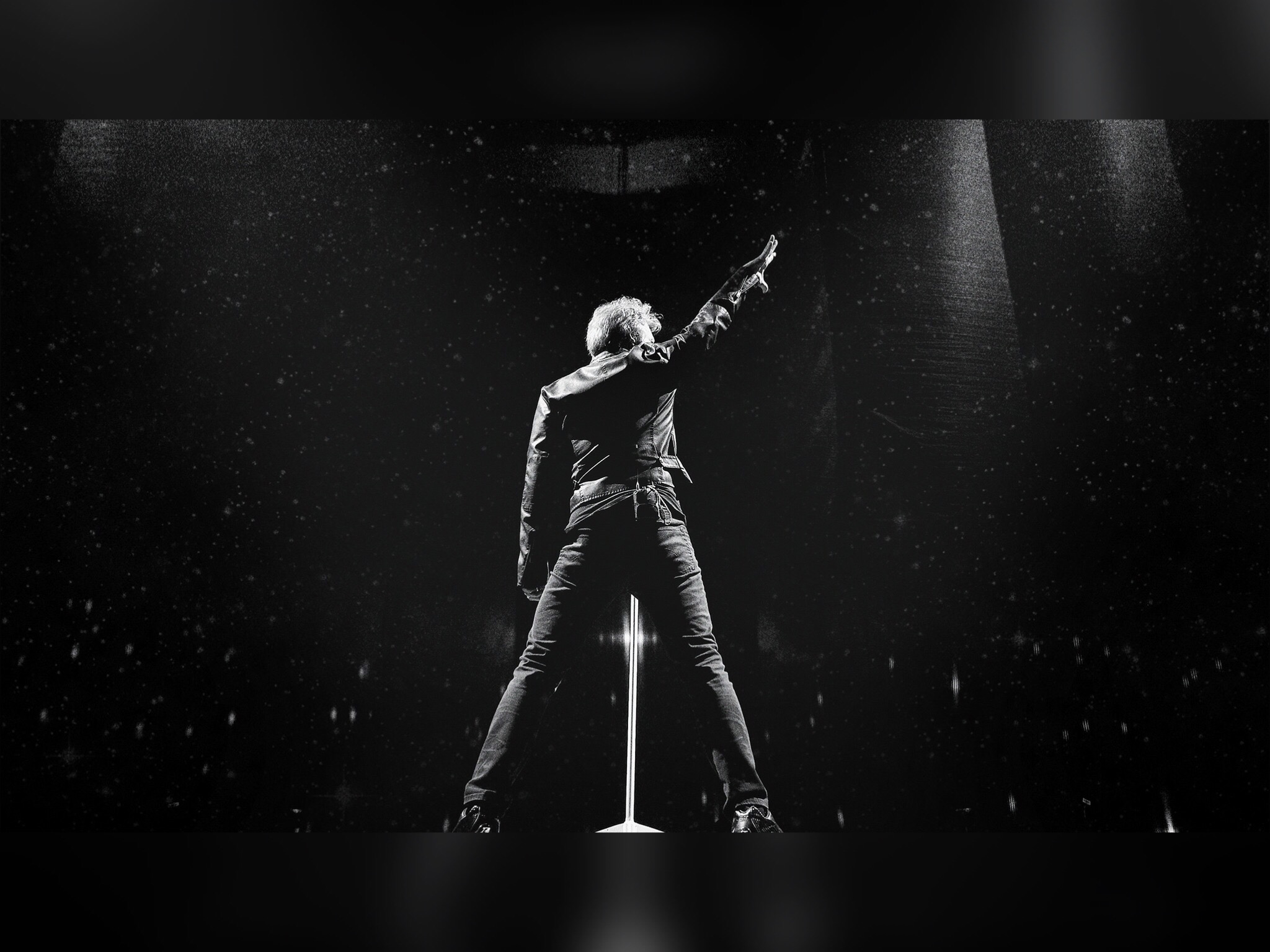 Newly inducted Rock Hall of Famers Bon Jovi (the band and its namesake leader) were just twelve days removed from their RRHOF coronation when they rocked it out at Chicago’s United Center on Thursday night, April 26, 2018.

In support of their most recent project – a two-time No. 1 album titled This House Is Not For Sale, which also serves as the tour’s namesake – Jon Bon Jovi and company gave a stand-up performance (literally, people at floor-level were practically standing the whole time), proving you don’t have to be streamed a billion times or sell half a million downloads to have musical relevance in 2018.

The venerable band’s album This House Is Not For Sale was a No. 1 bestseller (once in 2016 and again in 2018, more on that record-setting accomplishment in a sec), but it has racked up some dubious distinctions along the way, characterized by precipitous chart drops that make Bon Jovi the perfect poster children for older rock bands whose current sales are likely owed to their longstanding loyal fan base and not a growing one.

For instance, when This House Is Not For Sale was initially released in November 2016, it debuted at No. 1 on the album chart with a respectable 129,000 units sold at a time when rock albums were (and still are) lucky to sell even a fraction of  that amount in a single week.

Then the album fell from its No. 1 début down to No. 43 in its second week (following a 92% week-to-week sales decline), giving it the most precipitous fall from the top in Billboard album chart history up to that point, a mark that has only been surpassed by a handful of other albums since.

When the reissued version of This House re-entered the chart sixteen months later (in March of this year) at No. 1 again – this time due to the packaging of coupons for redeeming the album with the purchase of concert tickets for the band’s current 30-city tour, it became the first album ever to enter the Billboard charts at No. 1 twice.

That’s a huge accomplishment for any band, let alone one that’s been charting for three-and-a-half decades.  Except the following week, the album plummeted from the No. 1 spot all the way down to No. 169, once again making Bon Jovi the act with the largest fall from No. 1 in chart history.

Such anomalies would relegate lesser groups to that dreaded flavor-of-the-week status.

But obviously not Bon Jovi.

They’ve been around too long and have sold out too many arenas (and too many albums) to be worried about such chart frivolity, especially in 2018 when veteran rock bands know their bread is buttered by the number of butts they place in seats, not by how many clicks they get on Spotify or Apple Music.

This night’s sold-out show opened appropriately enough with the title track to that latest set, a smart move on Bon Jovi’s part to introduce a lesser known tune to a hungry audience that was revved up from the start and raring to go with anything that blared from the arena’s huge speakers.  The fans really came to life, however, when the band played “Raise Your Hands” from Slippery When Wet – their breakthrough and still-biggest-selling album (with 12 million copies certified in the U.S. alone).

On the night’s third cut, “You Give Love A Bad Name,” the crowd rose to its feet where it essentially remained for the rest of the show.  After all, “You Give Love” was the song that brought Bon Jovi their first No. 1 single in 1986 and, as expected, the sold-out crowd of 25,000 or so paid homage.

Other newer songs were thrown into the mix as well.  Tunes like the mid-tempo rock ballad “Whole Lot Of Leavin’” and the power-chord rockers ”We Got It Goin’ On” and “Lost Highway” were all from the 2007 album bearing the latter song’s name. And whilst that album is one of the band’s six No. 1s, the songs from it didn’t draw nearly the reaction that the earlier tunes did.

That’s understandable when considering how the bulk of the band’s reported 130 million in career record sales hail from the albums they released between 1984 and 2000, and not the ones they’ve released since.

But the different era’s receptions didn’t deter Jon Bon Jovi and his group.  During an early interlude, as an intro to the ballad “When We Were Us” from their reissued current album, and as a pat-your-shoulder acknowledgement of his group’s longevity in this fickle rock-and-roll business, the still-perfectly coiffed group leader, now 56, called the current tour a 30-stop celebration of the band’s 35 years as a group.

And it was that last number – 35 – that had actually made them eligible for the rock hall ten years ago, making their 2018 induction seem like a bit of a snub to the band’s most devoted fans.

But crowd-pleasing, shoot-for-the-rafters arena rock has rarely been a critical favorite of the rock and roll élite (like those who have a say in RRHOF induction), and let’s just say that Bon Jovi has honed that brand of arena rock more skillfully than most.

For instance, “Born To Be My Baby,” “It’s My Life” and “We Weren’t Born To Follow” – all textbook arena rock jams – had the crowd on its feet belting out each song’s powerful chant-like refrains in unison while the band periodically stopped and admired their followers’ work.

After all, any veteran rock band worth its weight in platinum knows that the best way to preserve an aging lead-singer’s voice is to allow the crowd to do some of the heavy lifting from time to time, which Bon Jovi gladly did.

The band also slowed it down a bit from those fast rockers.

On “Amen,” a ballad from their 2013 No. 1 album What About Now, Jon Bon Jovi, who’d disappeared from the stage moments earlier, emerged halfway across the arena in the first-level stands with a screaming crowd surrounding him.  He thoughtfully serenaded the throngs of people nearby as they cheered wildly.  He kept that intimacy going for the next song, too, the 1992 top-10 ballad “Bed of Roses,” with which the crowd was obviously more familiar.

Jon Bon Jovi’s fifteen-minute mingling and singing stint while positioned in the stands was a nice added personal touch from someone who clearly appreciates that his fans are who made Bon Jovi what they are today.  One can only imagine how many selfies were snapped with Jon during that part of the show.

The band’s best performance of the night was a toss-up between “Keep The Faith,” a 1992 hard-rocking track that could have easily hailed from the 1970s with its heavy electric guitar riffs and prominent organ flourishes; and their third No. 1 single, “Bad Medicine,” a 1988 all-out jam that still ranks among my personal favorites.

Just before “Bad Medicine,” when the 56-year-young rocker strutted like a peacock along the stage’s entire perimeter on “I’ll Sleep When I’m Dead,” you knew he meant just that.

Nineteen songs and two hours in, it was pretty clear that the night was not yet dead.  Anyone with access to the many set lists on the Internet knew that there would be at least two more songs during the encore, and on this night there were three: the 2007 ballad “(You Want To) Make A Memory),” their best song “Wanted Dead Or Alive,” and their biggest hit, “Livin’ On A Prayer,” which topped the singles chart for four weeks 31 years ago.

Bon Jovi’s performance proved that this former ‘80s and ‘90s mainstay is doing anything but living on a prayer.  If the crowd’s reaction was any indication, the group and its energetic leader are getting along just fine – and will for years to come.

In fact, they showed that they’re just as important to the rock genre now as they were then, maybe even more so given the dearth of arena-filling younger rock groups out there these days.

Bon Jovi is doing that AND getting No. 1 albums, making one thing abundantly clear: their house won’t be for sale any time soon.

While former guitarist Richie Sambora reunited with the group for its rock hall of fame induction two weeks ago, he is no longer a member and did not appear at this show.

Bon Jovi’s other band members include:

Hugh McDonald on bass (since 1994), John Shanks (on guitar and who’s produced every album since Have A Nice Day), Tico Torres on drums and David Bryan on the keys (also a 4-time Tony-award winning playwright, according to Jon Bon Jovi’s introduction).