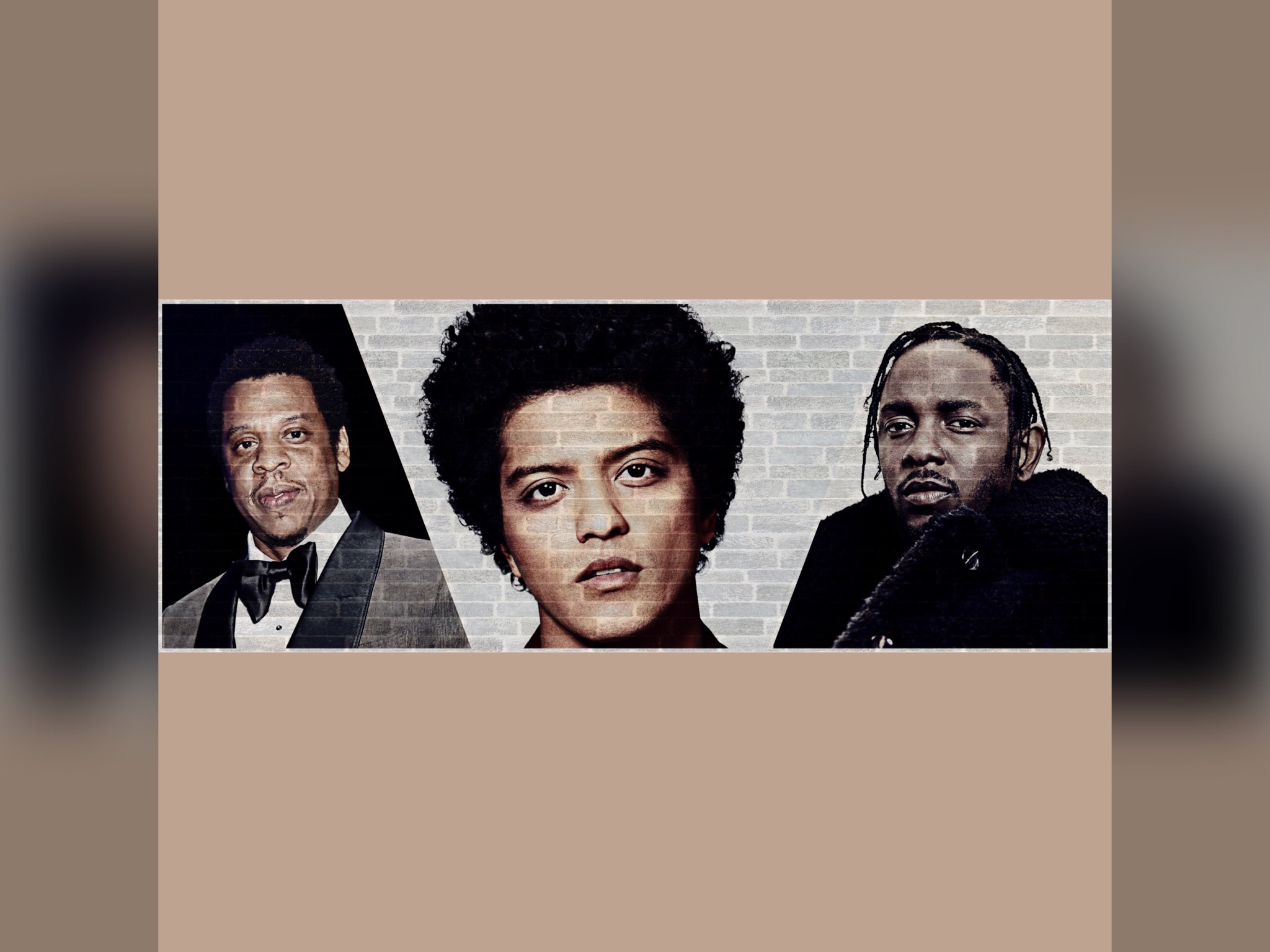 It took 60 years, but the 2018 Grammy Awards, which aired Sunday night on CBS, appeared to have finally given hip-hop and R&B fans something to write home about.

Or at least that’s how it was hyped ever since the nominations were released two months ago.

With the two genres – which are often joined as one in most contemporary music circles – dominating music consumption in all of 2017 for the first time (thanks mostly to hip-hop), this year’s Grammys found a way to actually reflect consumers’ musical tastes. Hip-hop or R&B acts accounted for the five most-nominated artists at this year’s event (JAY-Z, Kendrick Lamar, Bruno Mars, SZA and Khalid), with an unprecedented 17 of the 20 nominations in the Big Four categories (Best Album, Best Song, Best Record and Best New Artist) belonging to one or the other genre.

Conversely, pop superstar Ed Sheeran, who had 2017’s No. 1 Billboard Hot 100 hit with “Shape Of You,” was limited to hybrid competition (the song took best pop solo performance; he also won best pop vocal for its parent album Divide). No rock acts appeared in the Big Four categories. Even a legendary band like The Rolling Stones – usually the type of heritage band NARAS likes – were relegated to a niche grouping (they won Best Traditional Blues Album for Blue & Lonesome).

Indeed it appeared the Grammys had flipped!

With recent awards shows being the target of much criticism over the years for their lack of diversity in some of the more prominent categories, and with the issue of race being a highly sensitive and volatile topic anyway in the wake of the nation’s first black president being replaced by one who has shown himself (both socially and otherwise) to be the former’s polar opposite, this year’s proceedings beg the question, how should we feel about the 2018 Grammys?

On the one hand, at first blush this year’s awards would seem – in the minds of many black music fans (and artists) – to have righted the wrongs of previous Grammy sins, including some very recent ones, like last year’s Best Album win by Adele (over Beyoncé’s more musically complete and artistically stretching Lemonade – even Adele thought it was a snub). The five wins on Sunday for Kendrick Lamar, largely considered this generation’s greatest rapper, just felt right given his élite stature and the fact that he had one of last year’s most critically acclaimed releases (not to mention DAMN.’s ranking as the #1 album in Billboard’s year-end tally). By the way, the five wins tie Lamar with Lauryn Hill as the rapper with the most Grammy wins in one night, and it would seem the Grammys finally did right by hip-hop some 19 years later.

On the other hand, many African-Americans have long since given up on the Grammys (and other mainstream awards like them), relegating them to being “white people’s awards” and suggesting that black folks would be better served to focus on recognizing our own. As a result, shows like the annual BET Awards, BET Hip-Hop Awards, NAACP Image Awards, Soul Train Awards and (gospel music’s) Stellar Awards are often held up as examples of where African-Americans should direct our focus – although admittedly, many of those awards shows have their issues as well.

But let’s face it, the Grammys are music’s version of the Oscars, and as such they still reign as music’s premiere awards event. There are few musicians out there – black, white or brown – who will tell you they don’t want Grammy recognition (or who really believe they don’t despite what they may say publicly). It’s us fans who are more likely to dismiss the show and its 60-year history as meaningless to black culture. How many artists who’ve won Grammys have returned them or asked NARAS to vacate their wins?

Yet even with this year’s purported “corrections,” the Grammys still displayed their penchant for getting it blatantly wrong. Alessia Cara, a Canadian pop singer whose been charting since 2015 and had two top-ten hits that predated 2017 (including “Here” which topped several Billboard charts – including R&B – way back in early 2016), took home the 2018 Best New Artist award over true newcomers like R&B singers SZA and Khalid and rapper Lil Uzi Vert.  Cara is good, but she’s certainly not new.

Then there’s the controversial subject of this year’s biggest winner, Bruno Mars, and the field of R&B. In addition to his sweep in the three main categories for Best Album (24K Magic), Best Record (the single “24K Magic”) and Best Song (“That’s What I Like”), Mars took home the three biggies in the R&B field for best performance, best song and best album. Meanwhile, the perennially overlooked veteran R&B singer Ledisi, who was nominated for her tenth, eleventh and twelfth time this year, lost to Mars in two of the three categories she was nominated (she lost to Childish Gambino in the third). Ledisi has thus never won a Grammy – R&B or otherwise – while Mars took home three R&B wins (and seven total, including best engineered album, non-classical) in one night.

Some have argued that Mars is winning in the R&B field by appropriating black music (that’s not a view I share by the way). Indeed, he has struck a chord with listeners of all races with his trademark blend of catchy pop and throwback R&B/funk, and he’s doing it better than anyone else at the moment. And Mars, who graciously acknowledged old-school producers Jimmy Jam & Terry Lewis, Babyface and Teddy Riley, knows better than anyone who deserves gobs of credit for his inspiration.

But on this night, R&B’s gain (specifically that of Mars) was also hip-hop’s loss. Kendrick Lamar lost the album and record of the year categories to Mars, as did JAY-Z, who lost in all eight of the categories in which he was nominated. It was eerily reminiscent of wife Beyoncé’s loss a year ago, with music’s royal couple having primo front-row seats (along with oldest child Blue Ivy) and seemingly getting all gussied up to watch others get all the glory (at least JAY-Z was given huge props by show host James Corden at the beginning of the night).

It’s quite possible that JAY-Z and Lamar’s joint nominations may have cancelled each other out, as NARAS voters likely split their votes between the two rappers in the main categories, allowing Mars to emerge victorious. This suggests that, while it’s great (albeit late) progress to have multiple hip-hop albums or songs competing in major categories, there may not be room for two or more due to this split-vote cancellation effect.

To sum it all up, it’s probably safe to say that while the Grammys made great strides in recognizing music’s diverse palette with this year’s nominations, they still have a way to go when it comes to determining the winners. At least that’s likely how JAY-Z, Ledisi and some others felt as the show ended.

But as JAY-Z was quoted as saying at a pre-Grammy event earlier this past weekend, he famously ended a six-year Grammy boycott in 2004 because “I realized, man, all this is super subjective, and everyone’s doing their best, and the Academy—they’re human, like we are, and they’re voting on things that they like; it’s subjective. And we believe in it because we do.”

There’s probably a certain POTUS who was happy about JAY-Z’s shutout, given his Twitter exchange with the rap legend on the morning before the show about “historically low black unemployment rates.”

But, as an R&B or hip-hop fan, how do you feel about this year’s awards?

Assuming you still care, of course.