This year’s Super Bowl Halftime Show was exactly what it was supposed to be, and that’s not for everybody… 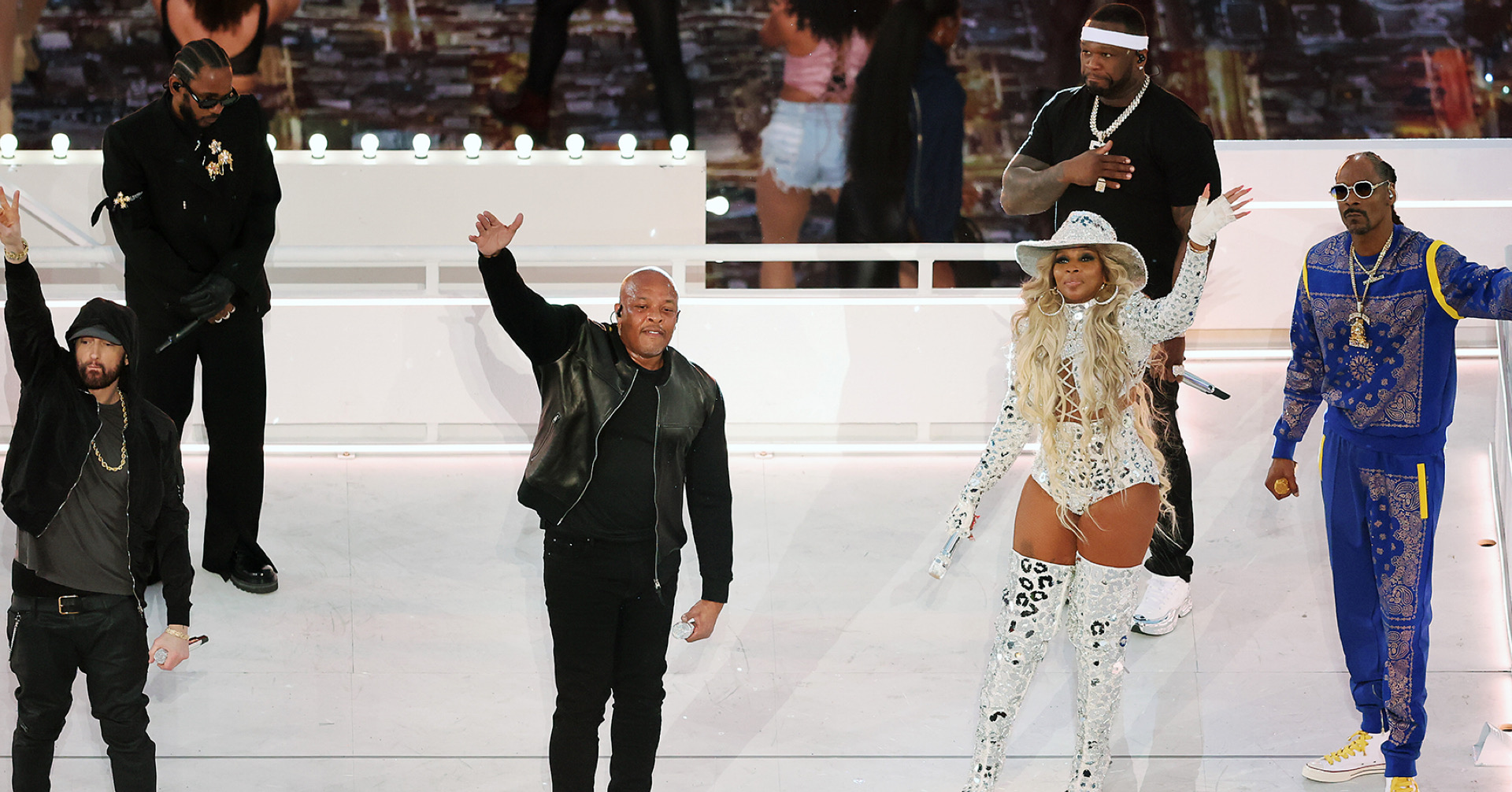 (February 14, 2022).  The Super Bowl LVI halftime show (Sunday, Feb. 13) is now in the record books. Along with the game itself between the L.A. Rams and the Cincinnati Bengals, which turned out to be a thriller with the Rams’ inspired 4th-quarter performance giving them the NFL title, the halftime show has been heaped with praise on social media.

Many people are saying that it was one of the best—if not the best—halftime shows ever and that its list of legendary hip-hop performers—perhaps one of the most accomplished sets of entertainers of any genre to grace the Super Bowl stage—was long overdue.

I’d be hard-pressed to disagree with those points (except for the lip-syncing which was made obvious by the audio quality of the vocals; but then again, with the highly energized performances and everything that could possibly go wrong in production, who could blame them for that technicality?).

But, lip-syncing aside, look at this list of credentials for the six artists involved.

You had Dr. Dre, the iconic producer and entrepreneur who redefined hip-hop in the 1990s with his creation of west coast funk beats that basically put California on the rap map forever.  He launched the careers of fellow rap icons Snoop Dogg, Eminem and, indirectly, 50 Cent, not to mention his production of some of the most classic R&B/hip-hop albums of all time, including N.W.A.’s Straight Outta Compton and Efil4zaggin, his own The Chronic, Snoop’s debut album Doggystyle, and albums by Eminem, 50 Cent and ‘90s singer Michel’le, to name a few.  He’s also been inducted into the Rock and Roll Hall of Fame by virtue of his group N.W.A.

Then there was Snoop Dogg himself, the charismatic rapper who’s given us some of the most memorable classics of all time, including “Nuthin’ But A ‘G’ Thang,” “What’s My Name,” “Gin and Juice,” “Drop It Like It’s Hot” and “Beautiful.”  His 1993 debut album was the fastest-selling hip-hop LP at the time, selling over 800k copies in its first week. He’s been a mainstream pop culture staple for decades and has come a long way since the earlier legal issues that threatened to end his career.

Then you have Mary J. Blige, the Queen of Hip-Hop soul who’s lived up to that title with 13 top-10 albums (including 4 No. 1s), eight of which have been certified platinum and five of those triple-platinum.  Her 13 top-10 LPs on the Billboard 200 chart are more than any other Black female in history (her new album, Good Morning, Gorgeous—released just this past Friday—will likely be her 14th).

Blige’s pioneering fusion of R&B and hip-hop in the early 1990s helped further legitimize the latter genre as a permanent musical force to be reckoned with.  The iconic superstar has three albums listed among Rolling Stone’s 500 Greatest Albums of All Time.  One of those, her debut LP What’s The 411, celebrates its 30th anniversary this summer.  She’s also a two-time Oscar nominee and a one-time Rock and Roll Hall of Fame nominee (something that’ll likely increase in the coming years until she gets in).

Kendrick Lamar, the “baby” of the bunch, has had one of the most critically acclaimed careers of any rapper during the past ten-plus years with three classic studio albums—good kid, m.A.A.d. city; To Pimp a Butterfly; and DAMN—that have reshaped hip-hop in the millennial.  Those three albums, by the way, have all been nominated for Grammy Album of the Year.  No other rapper has had as many in that category.  Lamar has won 13 Grammys overall (including having eleven nominations in one year), and became the first non-jazz or classical musician—much less rapper—to win a Pulitzer Prize for Music with DAMN.

And then there’s Eminem, long considered one of the greatest rappers of all time with the credentials to back up that superlative.  He’s had ten No. 1 albums out of eleven that reached the chart (only his breakthrough release, The Slim Shady LP, fell short at No. 2).  His ten No. 1s are tied among rappers with Kanye and Drake and second only to Jay-Z.  He’s sold over 200 million units worldwide, including more than 150 million in the U.S., making him the highest-certified rapper in history.  As a first-year eligible Rock and Roll Hall of Fame nominee in 2022, Eminem will no doubt be inducted (he’s currently leading in fan votes).

And all of this is not to mention surprise (upside-down hanging) guest 50 Cent, Eminem’s protégé who’s had a few blockbuster albums and singles of his own.  His “In Da Club,” which he performed Sunday, is considered one of the greatest hip-hop songs of the 2000s.  His second release, The Massacre, ranks behind only Eminem’s The Marshall Mathers LP as the fastest selling hip-hop album—selling 1.15 million copies during its first week in 2005.

That’s a mighty set of credentials for any collection of six artists who’ve graced the stage on football’s biggest night.  You’d be hard pressed to find another set of artists who are more accomplished in Super Bowl halftime show history.

Yet Sunday’s show still had its detractors—predictably, of course.  Some people—presumably not members or supporters of the hip-hop community—claimed on social media that they were actively tuning out in their disgust, using thinly veiled attempts or dog whistles to delegitimize the artists or hip-hop in general.  Some even went as far as to imagine their dream alternative half-time show performers (and asking others to do the same on social media).  One prefaced such a post with the assertion that Sunday’s performers likely “meant nothing” to her followers.

And therein lies the main point of this article:  that for all of its heavily credentialed artists, its long overdue status, and the mountain of iconic chart hits that were performed, this halftime show clearly wasn’t for everyone.  In fact, the Super Bowl halftime shows have never been for everyone and likely never will be.

Yes, music is universal, but it’s also hybridized.  The availability of many different genres means there’s something for everyone to love but nothing that everyone will love.

And with a wide ranging demographic audience that includes people of all ages and colors, the Super Bowl could never produce a show that would appeal to all.  How many young hip-hop fans do you think had their VCRs set to record when Clint Black, Tanya Tucker, the Judds, and Travis Tritt all took the stage during SB28 in 1994?

Sure, The Rolling Stones are iconic, but there were some in the past who found their music offensive.  You likely wouldn’t have to look far to find people who tuned out of their halftime show during SB40 in 2006 simply because of who they are (or the fact that the halftime show’s producers chose to showcase a group of aging legendary British rockers instead of highlighting Motown’s greatest musicians during a game that was being played in Detroit).

Just last year, when Canadian pop/R&B superstar The Weeknd performed in SB55 with only seven years of commercial relevance under his belt, there were probably more than a few baby boomers out there who couldn’t name two of his hits, much less who the artist was, as they lamented his presence.

The same could be said of recent halftime performers like Maroon 5, Lady Gaga, and Coldplay.  Great artists, yes.  But surely more appealing to their individual fan bases than to the music-listening and NFL football-watching community as a whole.

So for the folks who are criticizing this year’s show as one that “didn’t belong” because it’s “not music” or it was by a group of people who “don’t deserve it,” remember what others had to endure when watching a group of your favorite performers, like The Who or Tom Petty or Paul McCartney or even NKOTB, take the Super Bowl stage.

On this year’s stage you had a Rock and Roll Hall of Famer, two recent RRHOF nominees and other highly credentialed performers whose potential to get into the RRHOF is pretty high. In that regard, they’re no different than many of the rock acts that have graced this stage before and who likely would have been more satisfying to this set’s detractors.

Bottom line: this year’s show may not have been for everyone, but ask yourselves: when has it ever been?

2 thoughts on “This year’s Super Bowl Halftime Show was exactly what it was supposed to be, and that’s not for everybody…”