Always on Time? ‘Lady of Soul’ Ashanti gets more respect today than she did while breaking records 20 years ago… 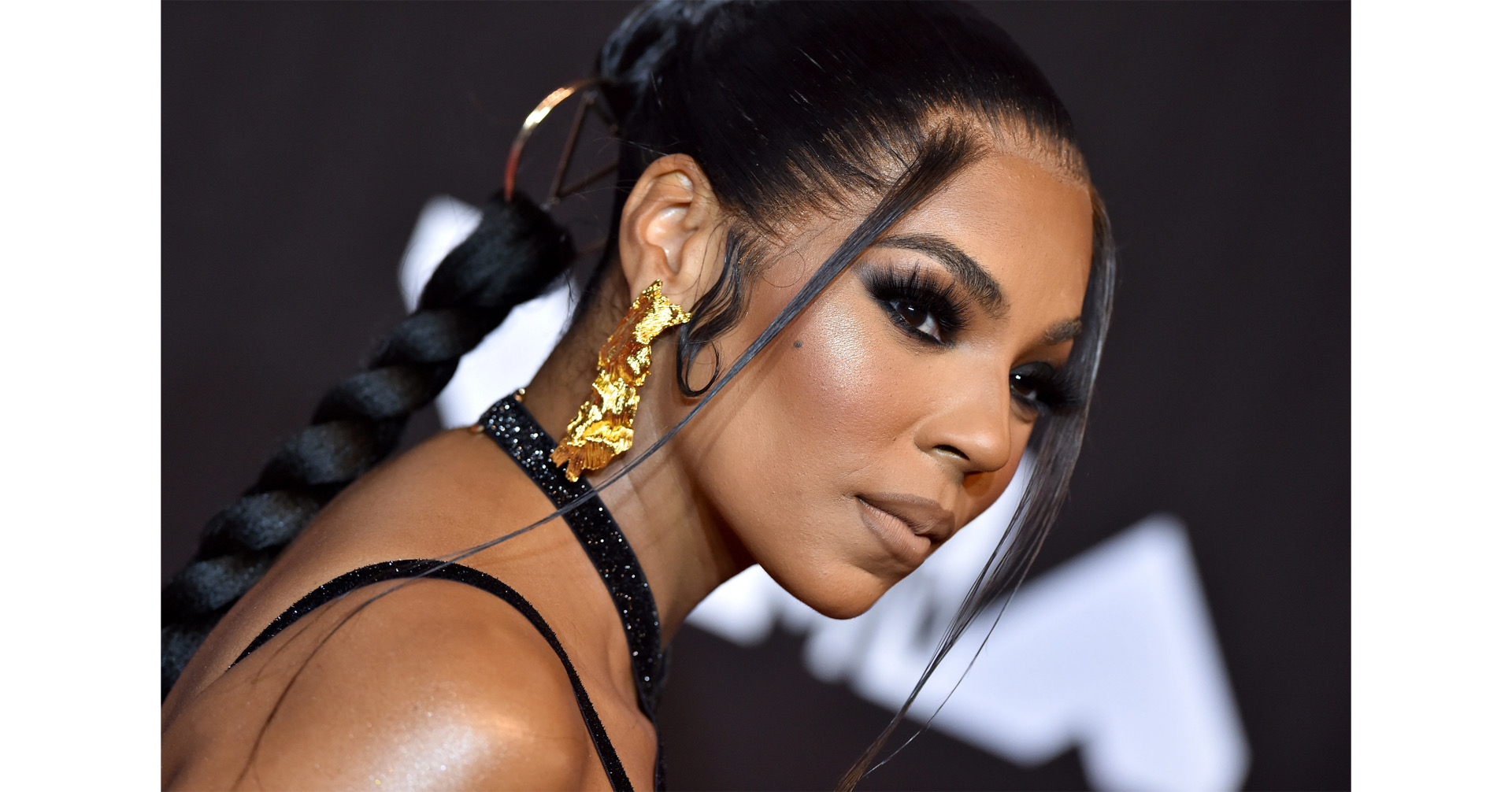 (December 3, 2021).  Some artists become critical favorites right out of the gate, where the stars align to make them both commercial and critical successes early on in an industry where the two don’t always coincide.

Some others wait a lifetime to get their due recognition, often not getting their roses until well after their careers are over or, worse, after it’s too late to enjoy them.

Still others fall somewhere in between, with major commercial success well behind them but with enough years ahead of them to be able to enjoy whatever new accolades may come their way…however late they may be in coming.

File Ashanti—former R&B/hip-hop princess from the early ‘00s—in the third category.  Just this past week, she received the coveted “Lady of Soul” recognition at the annual Soul Train Music Awards, a lifetime achievement honor 20 years in the making and one many never saw coming earlier in her career, even when she was topping the charts and breaking longstanding records in the process.

It was 20 years ago, in fact, that Ashanti’s journey as a Billboard chart princess began.  And within four months of her debut, she would completely dominate the charts, accomplishing things only the Beatles (and few others) had done before her, in a pre-streaming era when those kinds of things were next-to-impossible to do.

Ashanti’s historic journey took off on a hook she provided for red-hot rapper and label mate Ja Rule.  Both Ashanti and Ja were signed to Murder Inc., a company that was about to go from a fledgling hip-hop label to a hit-generating machine, thanks in large part to its soon-to-be two biggest stars.  From the end of 2001 and throughout much of 2002, Murder Inc. would have the charts on lock, with most of the hits credited to Ja and Ashanti.

It was exactly 20 years ago, on the Billboard Hot 100 chart dated December 1, 2001, that their classic rap-sung collabo, “Always On Time,” made its top-40 debut, jumping from No. 56 to No. 31, and becoming Ashanti’s first certified hit.  Nearly three months later, after a slow and steady climb, it would become her first No. 1.

The success didn’t stop there.

During the week that “Always On Time” climbed to the top in late February 2002, Ashanti’s second top-40 hit, a featured turn on rapper Fat Joe’s classic bop “What’s Luv?,” entered the region at No. 36.  Two weeks after that, just as “Always On Time” relinquished the No. 1 spot (ironically to another Ja Rule hit, the Murder remix of the duet with Jennifer Lopez, “Ain’t It Funny,” which Ashanti co-wrote), and “What’s Luv?” was still climbing, Ashanti’s third hit and debut solo single, the fast-rising R&B smash “Foolish,” which sampled DeBarge’s 1984 classic “Stay With Me,” entered the top 40 at No. 29.

Within four weeks, by the end of March 2002, all three of Ashanti’s singles—“Always On Time,” “What’s Luv?” and “Foolish”—were in the top ten simultaneously, making chart history.  It was the first time that a solo artist’s first three chart singles had landed in the top ten of the Billboard Hot 100 at the same time, and the first time any act had done that since The Bee Gees 24 years earlier.

For any artist to be in a category like that was an amazing feat in and of itself.  For that artist to be Ashanti, a young Black woman whose resumé before then only contained a low-charting feature with rapper Big Pun on the R&B/Hip-Hop chart, was remarkable.

Ashanti’s dominance continued through the spring of 2002.  As “Always on Time” and the Ashanti co-write “Ain’t It Funny” made their inevitable descents down the chart, the only question was which Ashanti single would take over.  Both “Foolish” and “What’s Luv?” were blazing up the charts.  But it was Ashanti’s own “Foolish” that took the crown with a 10-week run at No. 1 while “What’s Luv?” settled for No. 2 in a then-rare case of an artist preventing herself from reaching the top.  “What’s Luv?” totaled seven consecutive weeks at its No. 2 peak (five of those behind “Foolish”).

With “Foolish” and “What’s Luv?” owning the top two slots simultaneously, Ashanti became the first female—and only the fifth act overall—to accomplish that distinction (only the Beatles, Bee Gees, Puff Daddy and, ironically, Ja Rule had ever been chart champ and runner-up at the same time before then).

And to put the icing on this incredibly sweet-tasting cake, Ashanti’s success wasn’t limited to singles.  As “Foolish” climbed to No. 1 on the Hot 100, her début self-titled album broke the first-week sales record for a female solo artist’s debut in the MRC Data (formerly Nielsen SoundScan) era.  It debuted at No. 1 on the Billboard 200 album chart with more than 503,000 units sold in its first week, besting the previous record-holder Lauryn Hill’s record by roughly 80,000 units.

To put her accomplishments in perspective, Ashanti was doing twenty years ago what artists like Taylor Swift, Ariana Grande, Justin Bieber and others are well known for today, only without the benefit of streaming to make having multiple simultaneous chart entries more likely.  Back then, radio support was still essential, and all three of Ashanti’s first hits were getting love on the airwaves at the same time…a rarity for any artist, much less one who only a few months earlier was a complete unknown.

Yet, with all of these accolades, Ashanti rarely got the props she deserved.  In fact, back then she was a bit of a pariah, often on the receiving end of the kind of criticism reserved for anyone whose vocal schtick wasn’t church-honed acrobatic runs (think Aretha), or diva-like melismas (think Mariah Carey or Christina Aguilera).  In 2002, the common refrain was “Ashanti couldn’t sing” or her vocals were considered lightweight.  Or, worse, there was the sexist criticism that she was merely riding Ja Rule’s coattails to success.

The respect level was pretty low for the singer out of Glen Cove, New York.  Things were so bad that, in 2003 when she was nominated for her first Soul train award, the Aretha Franklin award for “Entertainer of the Year,” one person started an on-line petition with 30,000 signatures against Ashanti, who was 22 at the time, claiming that a more veteran artist or a more critically acclaimed newcomer (like Alicia Keys or Indie Arie) should receive it.

Soul Train founder Don Cornelius stuck by his and the Soul Train awards committee’s decision and awarded Ashanti the honor, with singer Patti LaBelle coming to her defense, stating “we must protect our babies.”

Ashanti continued to enjoy the hits and had successful followup albums after her debut, but by the end of the 2000’s, changing musical styles, Murder Inc.’s demise, and an overall decline in mainstream R&B popularity resulted in Ashanti falling out of favor while she was still only in her 20s, seemingly legitimizing the criticism she had received earlier.

Fast forward to 2021 and Ashanti is now enjoying a bit of a renaissance.  Not only is she enjoying the limelight again, but this time it’s with an ironic twist.  Now she’s being praised for the very thing she was criticized for 20 years ago: her singing.

Now 41, Ashanti has wowed fans in recent months with appearances including the post-BET Awards episode of DJ Cassidy’s live-from-his-living-room mix show “Pass The Mic” in June.  On that show, Ashanti appeared solo (“Foolish”) and in successive turns with Fat Joe (“What’s Luv?”) and Ja Rule (“Always On Time”) with memorable performances that showed off her ability to sing without any “enhancements.”

In September, she announced that she had gained control of her master tapes and that she was re-recording her debut album, Ashanti. It was a page right out of the Taylor Swift playbook and, although no one expects Taylor-like numbers when the album is released, it’s a bold move that clearly demonstrates Ashanti’s confidence, considering her now well-honed vocal chops.

And then there was this praiseworthy performance at the Soul Train Awards last week.

Ashanti brought sexiness and sassiness as she performed a medley of her most memorable hits while audience members gleefully sang along.  It was a sight to see and a reminder of just how much her music touched a young generation of folks who grew up with her at the beginning of the millennium.

But more importantly, it was a sign that the record-breaking success Ashanti enjoyed 20 years ago was no fluke.  Her music has stood the test of time, and she’s now grown into her maturing voice with an ability to perform those songs with even more confidence and swag than she did when they were dominating the charts two decades ago.

But mostly she’s come full circle, first with the Soul Train recognition at the beginning of her career—one for which she was heavily criticized—and now with the most recent Soul Train honor, the “Lady of Soul” award, one with which very few people are taking issue.

Just goes to show, some recognition may not be ‘always on time,’ but it will eventually come to those who are patient…and deserving.

Congrats to Ashanti for finally being recognized for her record-breaking chart success…AND for her singing talent!