Don’t look now: This year’s 2 most canceled artists may end up with the biggest album and single of 2021 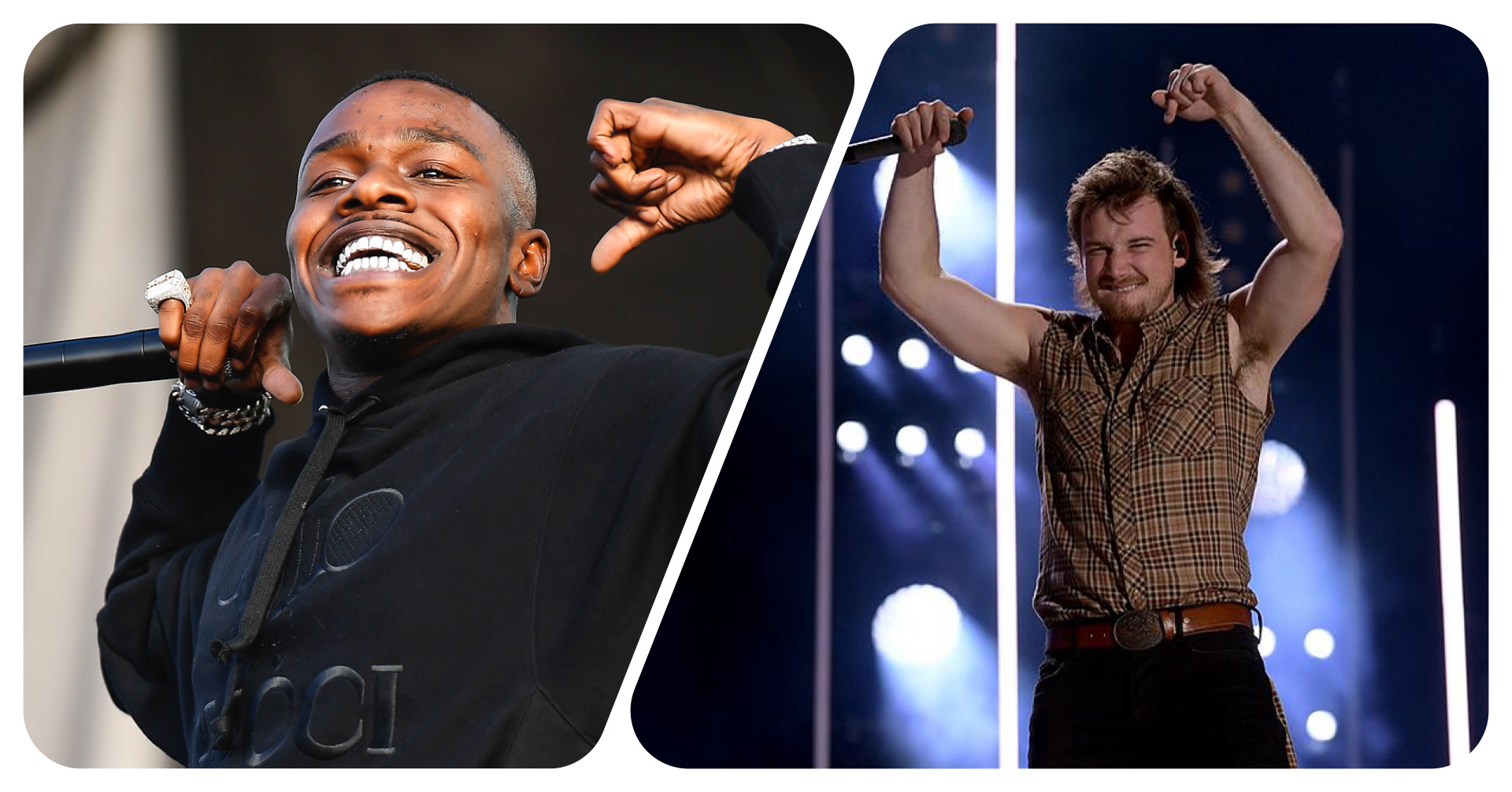 (August 3, 2021).  Inappropriate statements originating from two current superstars of the country and hip-hop worlds went viral and caused a huge backlash this year – the first involving the N-word, the other a homophobic and sexist rant.

The Internet was swift in its condemnation of both incidents with each artist being forced (likely by their labels) to issue apologies in their attempts to stop the bleeding, so far to varying degrees of success.

Don’t look now, but the sources of each slur may respectively be on track to having the biggest album and single of 2021.

You know the story.  Back in February, Wallen’s now-famous utterance of the N-word was caught by a neighbor’s cell phone as the rising country music superstar was returning home from a late night out.  The video was leaked and instantly went viral, causing his record label to denounce him and various music industry institutions to ban him from awards shows and other industry events.

Wallen’s songs were also removed from various streaming platforms’ curated playlists and his albums’ consumption numbers were widely expected to drop as a result.

But that last thing didn’t quite happen and, instead, Wallen’s latest release, Dangerous: the Double Album, has remained a steady seller and stayed at No. 1 on the Billboard 200 (where it debuted in January) for a total of ten weeks.  It has ranked in the top ten ever since, moving back up this week to an impressive No. 4 (in its 29th week on the list).

In Billboard’s mid-year report released last month, Wallen’s Dangerous was the most consumed album so far in 2021, with more than 2 million units registered.  It still averages about 45 – 50K album-equivalent units per week with very little drop-off as other albums come and go around it.

At this point, Dangerous easily has the inside track on being named the No. 1 album when Billboard releases its year-end chart (which uses a skewed November-to-November fiscal year, but will include all of Wallen’s consumption activity for roughly ten-and-a-half months of the eligibility period).

As 2021 enters its eighth month, time is of the essence for any real competition to supplant him.  The year-end charts will be tallied in November and unless someone releases a blockbuster LP very soon and registers astronomical numbers in a short period of time (think Adele’s 2015 juggernaut, 25, which sold 3 million in its first week!), all bets are on the much-maligned Morgan Wallen’s Dangerous being this year’s biggest album, with most of that success occurring after his viral N-word slur.

And then there was DaBaby…

Just last week, rap superstar DaBaby displayed ignorance and hate as he ranted before a live crowd at the Rolling Thunder festival in Miami about HIV/AIDS and men performing oral sex on one another “in the parking lot,” not to mention women with water-smelling private parts.

He has since apologized twice (or three times if you count the closing credit on his most recent music video issued last week), with the latest repentance (on Aug. 2) being without as much of the deflection and ego-preserving hubris of his earlier post-rant tweets (or that new music video).

Like Wallen earlier this year, the backlash against DaBaby was strong and swift.  As of this writing, at least seven major music festivals canceled the Charlotte rapper’s planned performances and there could be more – even with his apologies growing more and more contrite with each attempt.

According to Billboard, radio play for his remix version of Dua Lipa’s hit single “Levitating” was down 12 percentage points (from 71% to 59% of the song’s overall activity) from July 23 to July 29, the period used for the latest chart rankings (the rant occurred on July 25).  The song slipped on the Hot 100 from No. 3 to No. 5 this week.

Yet despite the decline – and despite Lipa’s very public denouncement of her duet partner in the wake of his ignorant statements – “Levitating” has a very good chance of winding the year as the No. 1 Hot 100 single of 2021.

“Levitating” peaked at No. 2 in May and while the jury is still out on whether the song has any chance of edging its way to No. 1 on a weekly chart between now and November – especially in the wake of the DaBaby debacle – it’s not unheard of for a No. 2-peaking single to end up as the biggest hit of the year.

This millennium began with two such songs pulling off the feat.

In 2000, country singer Faith Hill’s “Breathe” ranked as the biggest single of the year, followed by the rock group Lifehouse’s “Hanging By A Moment” in 2001.  Both songs peaked at No. 2 on the weekly Hot 100 during their respective years, becoming the first time that two non-No. 1 songs ranked as the year’s top hits in consecutive years – and only the third time in Hot 100 history after it happened in 1965 (“Wooly Bully” by Sam the Sham and the Pharoahs).

Dua Lipa’s enduring “Levitating” remix featuring DaBaby is in good position to become the fourth as this year’s big No. 1 hits don’t have nearly as much stamina to suggest that they might end the year at the top.

Olivia Rodrigo’s “Driver’s License” spent eight weeks at No. 1 but has been out of the top 10 since May (with about three fewer months on the overall Hot 100 list than “Levitating”).  BTS’ “Butter,” this year’s No. 1 longevity champ with nine weeks at the top (and counting), only has three months worth of accumulated chart points (six months fewer than “Levitating”) with only about three months remaining in the tracking year.

All of this means that, when all is said and done, don’t be surprised if the year’s two most “cancelled” artists – Morgan Wallen and DaBaby – wind up with the No. 1 album and single of 2021, respectively:  Wallen with an album that simply won’t quit (many months after he was shunned), and DaBaby by being featured on a remix of a song that is still among the country’s most popular.