Skip to content
I Can’t Believe That Song Is 40! My Lists R&B Music Commentary Trivia You Can Use Uncategorized

40 Years Ago: 1981 Post-Disco A-to-Z…a playlist of the greatest jams from the best year of the post-disco era! 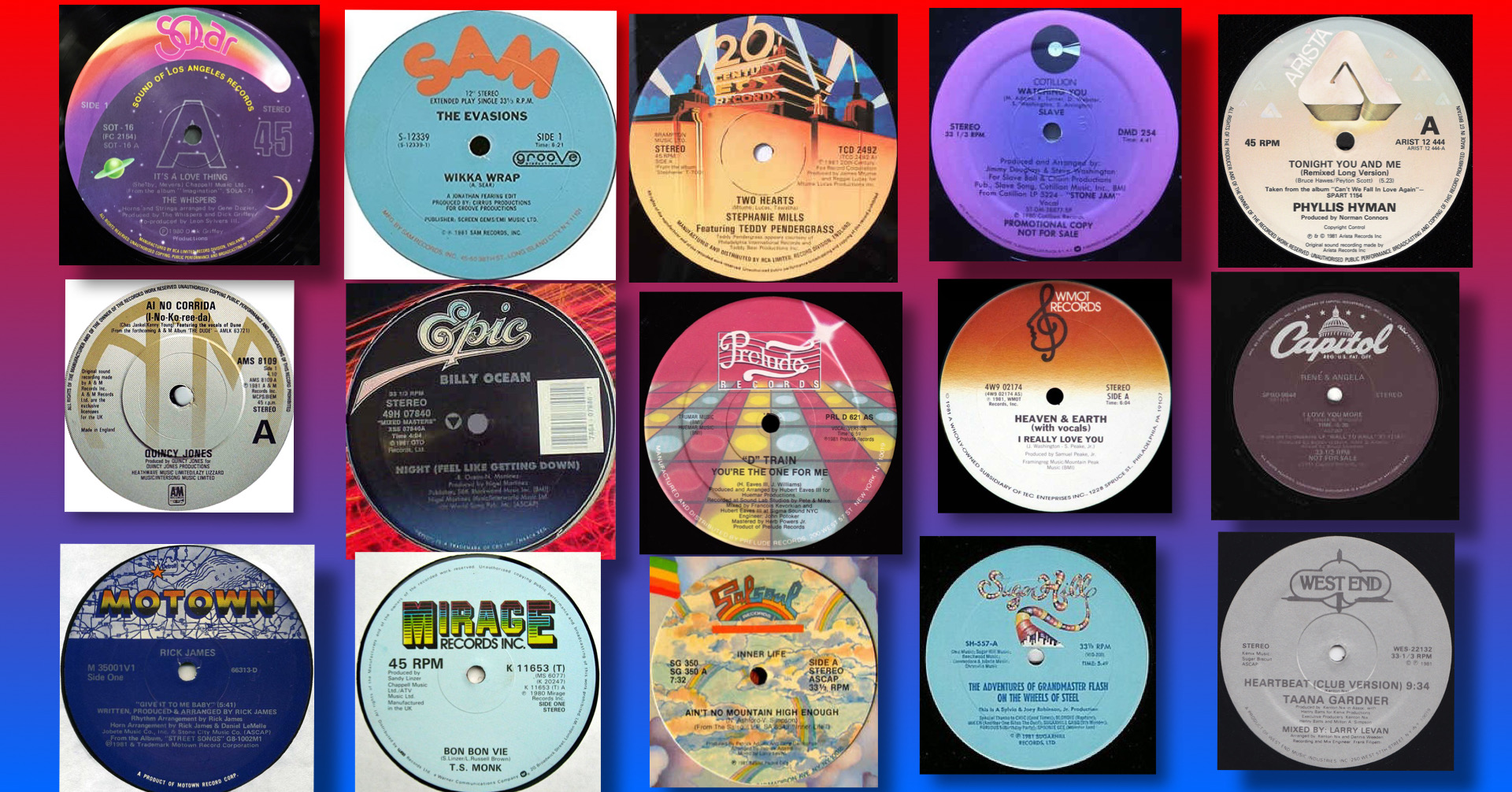 (As always, readers can scroll directly to the bottom of the article to access DJRob’s exclusive list of the best dance music of a forgotten era, or you can first keep reading for more of the blog’s history lesson about what made 1981 and these post-disco jams you forgot you loved so unique and so classic!)

Post-disco history: what made 1981 so important to the genre

Many historians who write disco’s eulogy generally cite the year 1979 as the beginning of its dramatic demise in the American musical mainstream.

That was when the infamous anti-disco rally happened at Chicago’s Comiskey Park in the middle of a scheduled Major League Baseball doubleheader between the White Sox and visiting Detroit Tigers on July 12, 1979.

That violent and hate-tinged (or, at best, ignorance-based) “Disco Demolition” event led to the forfeiture of the second game but, more importantly, had far-reaching implications for disco as it symbolized the beginning of the genre’s significant backlash and drop in radio support and record sales over the next few years.

By 1981, disco had all but disappeared from the pop charts.  Of that year’s seventeen No. 1 songs on the Hot 100, only three had spent any time on the Billboard Disco Top 100 chart – and two of those were by rock group Blondie in a joint listing of “The Tide Is High” and “Rapture” (at the time Billboard often combined song entries on its disco chart for tracks appearing on the same album).

The other was “Celebration” by Kool & the Gang.

That’s three out of 17 – or just under 18% – of 1981’s No. 1 pop hits that had any kind of disco connection to them…and that connection was dubious at best, particularly the “The Tide Is High,” which is more of a reggae-pop tune.

It’s this bit of history that makes 1981 one of the most interesting years in dance music’s long, storied history, and the most compelling in terms of launching post-disco’s best, most forgotten music ever!

Forget what Wikipedia and the calendar say…1981 was it!

While the calendar and logic would show that 1980 was technically the first full year after disco’s doomsday the previous July, this blogger contends that 1980 still had plenty of disco to go around on the pop charts, with big hits by Diana Ross, Stephanie Mills, George Benson, Queen, the Brothers Johnson, the Whispers, Shalamar, Kool & the Gang, Lipps Inc., the Jacksons and more populating the top 20 of the Billboard Hot 100.

But by 1981, things had gotten so bad that – after February of that year when Kool & the Gang’s “Celebration” topped the chart – no other “disco” song outside of Blondie’s “Rapture” even made the Billboard top ten.  By that August, there were zero disco songs in the pop top 40 – a first in the five years since Billboard had created its own National Disco survey (in August 1976).

It was also on August 1, 1981 that two major events occurred which reflected the evolving musical landscape and the mainstream’s shift from dance-oriented music to rock-leaning formats: 1) Billboard reduced its disco chart from a 100-position list to an 80-position one; and 2) MTV – the first cable network devoted completely to music video programming…and mostly rock music at that time – was launched.

Further in 1981, disco really began to take on a different signature, musically speaking.  Slowly disappearing were the plush, polished productions that had characterized the genre throughout the 1970s and 1980.

Strings and hi-hats were slowly being replaced with keyboards, sequencers and drum machines.  The bass drum, which had been heavily featured in disco hits by groups like Chic and others in the late 1970s, was being reduced to a quieter thump in the early 1980s (even in later Chic albums), while other percussive sounds – mostly machine-driven – became more prominent.

Of course there were still some bass-heavy examples in 1981, as tunes by Bill Summers (“Call It What You Want”), Jeannette “Lady” Day (“Come Let Me Love You”) and Frankie Smith (“Double Dutch Bus”) would prove. But they were quickly becoming the exception not the norm.

The post-disco format had also become very singles-driven, with artists largely linked to independent labels or imports like Prelude, Sugar Hill Records, SAM and others.  Although many majors still had product out there – namely Atlantic, Elektra, Mercury and Capitol Records – without the commitment of those labels’ distribution arms, the songs and artists didn’t receive the same mainstream radio support as disco had just a year or two earlier. Instead, post-disco music relied largely on DJs from the New York City club scene for its continued exposure and popularity.

All of these changes paved the way for post-disco sub-genres like house, techno, trance, and dance-pop to emerge.  Eventually, dance music’s evolution continued with hi-NRG, dubstep, freestyle, alternative dance, and electronic dance music all taking center stage at various times over the past four decades.

Disco’s rapid demise had been underway for two years by mid-1981, but it was arguably in 1981 when the genre hit its nadir, and from its mainstream ashes emerged some of the best dance and disco music of the 1980s (and beyond).

One thing that was thriving in 1981 was the 12” vinyl single. All 125 songs on this special countdown were available in the format, although many of them were promotional copies sent only to radio stations or DJs, or found as imports from Europe or elsewhere.

However, plenty of them could be found in the “Disco Singles” section of your favorite record store, which is where this blogger spent much of his time back in the day.

This is why djrobblog contends that 1981 best represents the first full year of the “post-disco” era, despite many historians (or at least Wikipedia) loosely defining it as beginning in late 1979 (and continuing through 1985).

It’s with this in mind that djrobblog is celebrating the 40th anniversary of what we consider the first true year of the post-disco era – 1981 – with a special playlist of the 100+ greatest post-disco songs of that year.

To be eligible, the songs had to be disco or post-disco in nature – or a pretty damn close relative thereof – and chart during any part of 1981 on Billboard’s weekly lists, primarily including their Top 100 or Top 80 Disco charts, but also the Hot Soul Singles (as the R&B/Hip-Hop chart was then known) or the Hot 100 pop chart.

The songs are listed alphabetically – from “A Little Bit Of Jazz” to “Zulu” – rather than in any kind of rank order.  Each entry includes YouTube links – to either audio or video clips – with a special Spotify playlist at the end of the video countdown for listeners’ playback convenience. Each song is pictured by its original 12” vinyl label.

This article wouldn’t be complete, however, without the blog listing its Top 20 favorites from these 1981 classics, which is added at the end of the article.

Readers are encouraged to let us know their favorites also.  You can upvote any of the entries or feel free to provide comments at the end of the article or in any of the social media feeds where the article is posted!

I hope you enjoy getting your post-disco groove on…let the music begin! And don’t forget to click the arrow to the next page after each group of 25!

You may not be finished! Don’t forget to scroll through all 125 jams – or come back later to do so – by clicking the right arrow above (it appears below each grouping of 25 songs).

You can also enjoy this exclusive Spotify playlist with over 11 hours worth of music featuring all the available songs courtesy of DJRob!

2 thoughts on “40 Years Ago: 1981 Post-Disco A-to-Z…a playlist of the greatest jams from the best year of the post-disco era!”