Skip to content
Featured Artists Hip-Hop Perspective In Memoriam... Trivia You Can Use

Remembering the late DMX: a King among kings in hip-hop royalty, with the numbers to back it up. 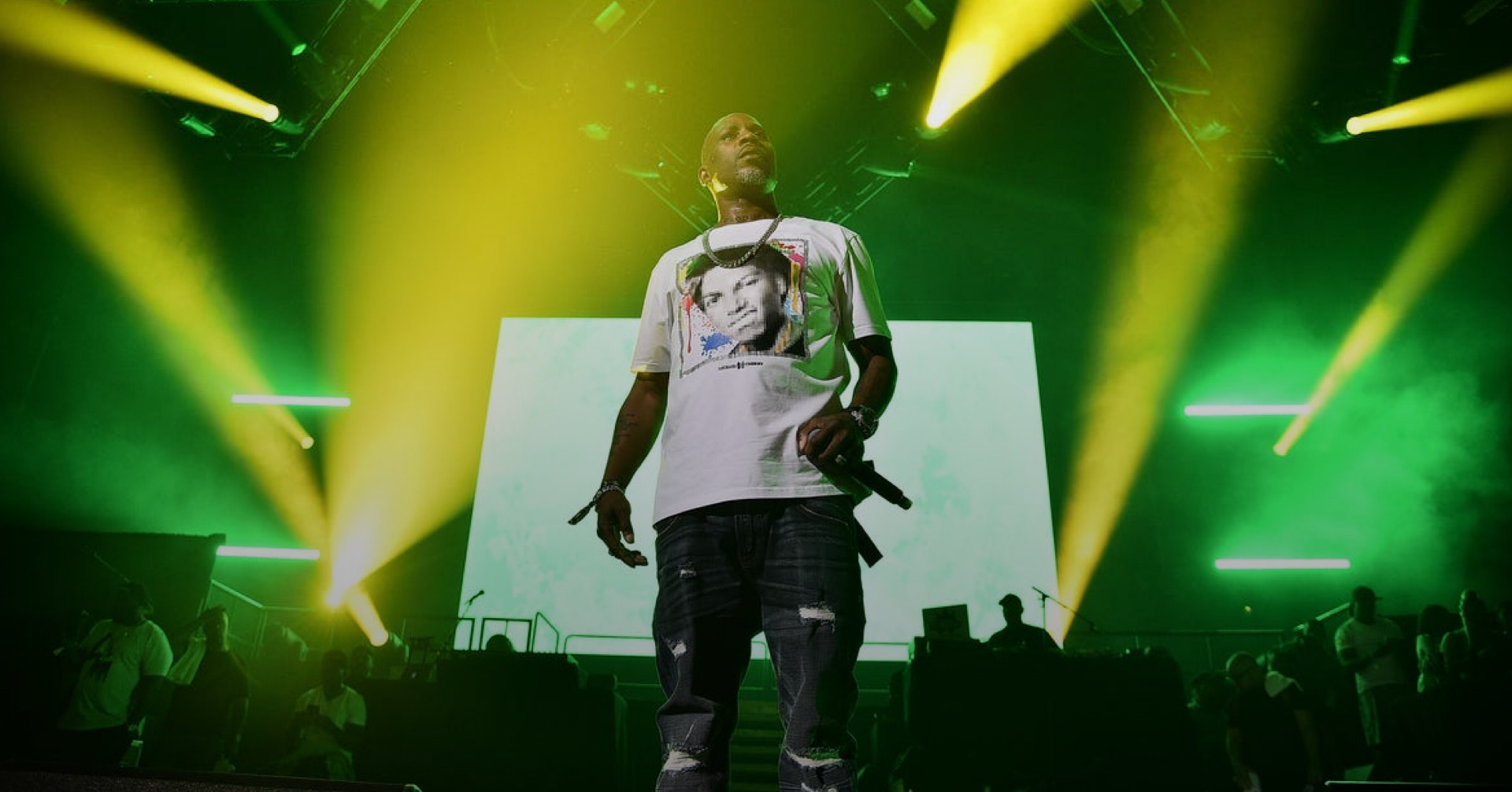 (April 10, 2021).  It was the news we all dreaded but had a sense was imminent: iconic rapper DMX, born Earl Simmons in Mount Vernon, NY, died Friday (April 9) after lying comatose for a week following a heart attack the previous Friday.  He was just 50.

The news of X’s death came just hours after the announcement of the passing of British royalty, Prince Philip – the Duke of Edinburgh and husband to Queen Elizabeth II – an event that would no doubt dominate the day’s news cycle, reducing DMX’s passing to the equivalent of actress/model Farrah Fawcett’s when both she and King of Pop Michael Jackson died on the same day back in 2009.

But DMX was royalty in his own right: hip-hop royalty.  Especially at his peak when, at one point, he was rivaled by very few others in terms of chart supremacy.

Go back with me to mid 1998, when the rap world was still reeling from the tragic deaths of Tupac Shakur (who recorded as 2Pac) and The Notorious B.I.G. (birth name Christopher Wallace) and hip-hop was understandably confused about where it was going next and who would be the next superstars to take it there.

New Orleans-based Master P and his No Limit Records roster were making waves with chart-topping albums, furthering the already viable cause for southern hip-hop.  Even a post-Death Row Records Snoop Dogg got in on their action with one of his biggest albums to date, Da Game Is To Be Sold, Not To Be Told.

Yet while the marriage of Snoop’s west coast brand of rap with the southern style of Master P and Co.’s No Limit brand worked temporarily, it certainly had more than a few heads being scratched at the time.

Sean “Puffy” Combs (now “Diddy”) and his Bad Boy Entertainment label was arguably dealt the biggest artistic blow with Biggie’s death in 1997.  No disrespect to Tupac (or his fans), but Pac clearly had finished more unreleased tracks than Biggie during both rappers’ lifetimes, as their respective posthumous catalogues would reflect in the ensuing years.  Pac had enough material remaining for a handful of albums after his death, while Biggie’s camp came up with enough scraps for just one legitimate studio release following 1997’s Life After Death.

Combs’ Bad Boy label ultimately came up with a few winners in 1997-98 with releases from Mase, The Lox and the label CEO himself, Puff Daddy (as he was known then), but the promise of a marquee rapper who also served as the ambassador for an entire coast just a year earlier was extinguished with Biggie’s death.

Speaking of the east coast, Jay-Z, who had released two albums by early 1998, was definitely on his come-up.  But the now-billionaire and business mogul had yet to secure his first No. 1 album in the 18 months following Biggie’s murder.  Other rappers like Nas, Scarface, the Fugees, Bone Thugs-n-Harmony and Wu Tang Clan had scored big in the previous few years, but what they secured in record sales they lacked in larger-than-life personalities to take hip-hop to the next level.

Enter DMX, the Yonkers-raised rap phenom with the gravelly voice, the trademark dog-bark, and a soulful cadence who had already delivered verses on several other rappers’ tracks in 1997-98 before releasing his debut album Its Dark and Hell Is Hot.  Before that first album, X had appeared on tracks by LL Cool J (“4, 3, 2, 1”), Mase (“24 Hrs. to Live”), and The Lox (“Money, Power Respect”).

It was that latter tune, along with DMX’s own “Get At Me Dog,” that set the table for It’s Dark and Hell is Hot.  Both singles had reached the top 40 of the Billboard Hot 100 (something X surprisingly only did once more with “Party Up (Up In Here)” two years later).  With anticipation for its release skyrocketing, It’s Dark and Hell Is Hot debuted at No. 1 on the album chart in June 1998 on its way to nearly five million in sales and quadruple-platinum status.

Just seven months after the release of his debut, X released his second album, the fellow No. 1 Flesh of My Flesh, Blood of My Blood.  Issued in December 1998, it marked the fastest a rapper had achieved two No. 1 albums so soon in his career and the quickest turnaround for consecutive chart toppers for any rapper (beating the gap between 2Pac’s No. 1s All Eyez on Me and his posthumous The Don Killuminati: The 7 Day Theory by three weeks).

A year later, DMX released his biggest-seller, the quintuple-platinum certified …And Then There Was X, which topped the chart on the anniversary of his second album doing so.  The third album featured his biggest chart hit as a lead artist, the tune “Party Up,” which only peaked at No. 27 on the Hot 100, but clearly propelled the album to astronomical success.

While “Party Up” was his biggest Hot 100 hit, the one X will likely be most remembered for is “Ruff Ryders’ Anthem” from the debut album.  That Swizz Beatz-produced track was a radio mainstay throughout the second half of 1998 but peaked at a low No. 94 on the chart in early 1999 – the victim of a lack of commercially available singles in stores and Billboard chart rules at the time.

But “Anthem” was all over the clubs and streets back then.  The song was an anthem in the truest sense with a military cadence for its beat, a multi-tracked chanted chorus and X’s signature “what!” ad-libs looped into every bar during the verses.

While “Ruff Ryders’ Anthem” was a prideful rally cry for X and his crew from the namesake record label to which he was signed, the song – like many of his tracks – contained elements of dark street themes surrounding murder and death.  It was a preoccupation of X’s that – like the gunshots that often punctuated his tracks – resonated throughout his music, which often explored issues of paranoia, conflict, disloyalty, and murderous revenge.

Still there was the other side of X that people don’t often cover, the side that explored his religion and his faith in God.  Several of his albums included prayers to “Father God,” with each prayer numbered sequentially for the album on which it appeared.  Each prayer became increasingly gracious, with X acknowledging his imperfect status and thanking his Lord and Savior for his birth and for the many blessings bestowed upon him.

Known for his gruff growl and his ability to alternate between that angry-sounding shouting cadence to a softer, more pensive delivery (particularly during the prayers) – all while mixing in a melodic vocal inflection that was uniquely his, DMX – along with Roc-a-Fella’s Jay-Z – was fast filling the void left by the deaths of rap’s previous royalty.

By the end of 2000, with just two and a half years and three albums in tow, DMX had already become one of the highest-certified selling rap artists in history with eleven million in sales among the first three albums, and counting.

What’s more, with five No. 1 albums under his belt, DMX was tied with Jay-Z as the rapper with the most No. 1s on the Billboard 200 at that point.  Even though the album releases were fewer and farther between and sales had declined for the latter two sets when compared to the prior three, they kept X’s name in rap circles and made him a hip-hop force to be reckoned with.

It was the sixth album, Year of the Dog…Again, that broke his No. 1 streak, with that release debuting and peaking at No. 2 in August 2006.  It was also his first album that failed to reach platinum (or even gold) status in America, a trend that would continue for his remaining releases, 2012’s Undisputed, 2015’s Redemption of the Beast, and a slew of compilation albums.

Ultimately, DMX couldn’t keep up the numbers, and a whole slate of rappers rose to prominence after his reign.  Jay-Z has long since broken the tie he and X shared in 2003 at the top of rap’s No. 1 leaderboard, now with 14 No. 1 albums under Jigga’s belt.

Superstars like Eminem, Kanye West, Drake, Future and Nas have all surpassed DMX in the race, and a handful more have tied him, including Tupac who did so with three posthumous releases.

The story of DMX’s struggles with addiction and how that likely contributed to his downfall have been well documented in the many other tributes and memorials commemorating his short life, and I won’t dwell on that here, except to note how it serves as a cautionary tale of how the pain of one’s difficult childhood and his inability to overcome the bleakest of circumstances not only informed his art, but likely truncated it.

DMX lived to be 50, which, when compared to other recent high-profile hip-hop artists’ deaths (XXXTentacion, JuiceWRLD, Pop Smoke as examples), is actually a whole second lifetime, mathematically speaking.  Unlike those young rappers, however, X had arguably exhausted the best of his artistic output before his passing.  Indeed, no other deceased solo rappers had ever achieved five No. 1s before leaving this earth.

Still 50 is too young to lose anyone, regardless of the demons he faced in life.  DMX wasn’t perfect, but who among us are?  As we have seen in recent months, even the greatest of royalty has its flaws, whether in the hip-hop world or in a British monarchy thousands of miles away.

While his musical legacy remains with us on this side, may DMX, born Earl Simmons, Rest In Peace…finally.

For those keeping track, here is the current leaderboard for No. 1 albums among rappers, where DMX now sits in a five-way tie for 7th place.