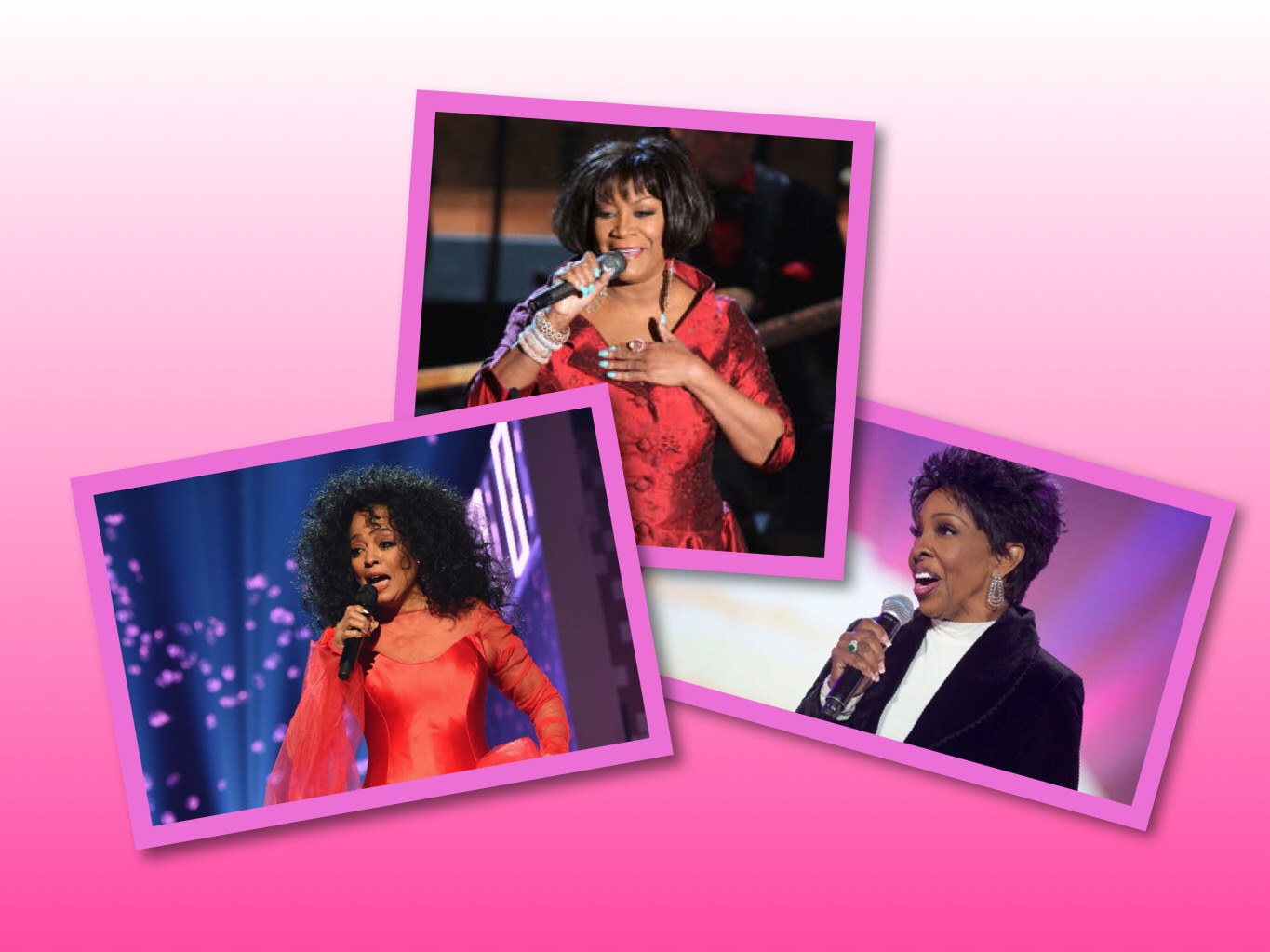 For instance, it was the year my beautiful mother was born…and she turns 75 later this year.

But it’s also the year that three legendary soul and pop music divas celebrate their diamond jubilees – three women whose contributions to music can’t be overstated and who are still as active today as they’ve ever been.

I’m talking about The Boss, The Empress and the Godmother…Diana Ross, Gladys Knight and Patti LaBelle, respectively.

These three amazing women, who couldn’t be any more different in terms of their styles and their music, have endured the test of time like few others, with each having been in entertainment for over half a century.

All three of them had their first hits when they were teenagers and all are still making headlines today.

Gladys was celebrating her 17th birthday when “Every Beat of My Heart” (credited as the Pips) hit No. 1 on the Billboard R&B chart in 1961 and crossed to the top 20 on the pop list.

Patti was only 18 when her first hit with the Blue Belles, “I Sold My Heart To The Junkman,” reached the top 20 on both charts.

And although Diana had been recording songs for Motown since she was 16, her first top 40 single happened at 19 (“When the Lovelight Starts Shining Through His Eyes” with the Supremes in 1963).

To say that these ladies are now in a class of their own…the last of a generation of singers whose main selling points (besides their unique voices) were style, grace and elegance…is truly an understatement.  Yet, even with all of their accomplishments (I could have given each one a tribute of her own), it still seems like they don’t get the full recognition they deserve – particularly from the very industry they’ve contributed to for so long (for the biggest slight, see their Grammy history below).

Djrobblog pays tribute to all three with a brief retrospective of their individual career milestones, followed by a trivia fan’s dream: an exclusive review of the career parallels and similarities involving all three.

Not surprisingly, Diana came first – born March 26 in Detroit, Michigan, under the sign of Aries.  As we all know, Ms. Ross achieved worldwide fame with Motown, first with The Supremes and later as a solo artist.  She’s amassed 18 No. 1 hits on the Billboard Hot 100, more than anyone except the Beatles and Mariah Carey.

Ross is still considered Motown royalty, having broken down barriers for black women in the world of pop music after The Supremes experienced their big breakthrough hit, “Where Did Our Love Go,” in 1964.  The twelve No. 1 singles she achieved with the Supremes in the 1960s are still the most of any female group, and more than any American group (the Beatles had 20).

Fast fact:  Her nickname came by way of her 1979 top-20 hit, “The Boss” (written and produced by Nick Ashford and Valerie Simpson), ironically, a song whose lyrics illustrated that, in the game of love, Diana was anything but in charge.

Guilty pleasures:  Diana has too many hits to single out any one, but after hooking up with master musicians Nile Rodgers and Bernard Edwards in 1980, Ross released the album diana featuring “Upside Down” and “I’m Coming Out.”  The former would become her last solo No. 1 hit – and her biggest – spending four weeks at the top of both the pop and soul charts.  Other No. 1 faves include “Ain’t No Mountain High Enough” and “Love Hangover.”

Biggest hits:  Diana Ross’ biggest hit with the Supremes was 1964’s “Baby Love,” the trio’s second No. 1 single.  Her biggest solo hit was the aforementioned “Upside Down,” while her biggest overall was the 1981 duet “Endless Love,” with Lionel Richie, which spent nine weeks at No. 1 on the Hot 100 and sold two million copies in the U.S.

Most memorable moment:  The free 1983 concert at Central Park in Manhattan where Diana, not wanting to disappoint thousands of fans, remained undaunted by a drenching rain that could have easily wreaked havoc on a stage covered with electrical equipment.  The show went on as planned, showing that not even Mother Nature could compete with Ms. Ross.

What she’s doing now:  The Boss continues to tour and recently celebrated her 75th birthday (a month early) at the 2019 Grammy awards ceremony.  She did it in typically glamorous fashion by performing her signature hit, “Reach Out and Touch (Somebody’s Hand).”  The Motown legend is the mother of five including Tracee Ross, the comedic actress who has made a name for herself on several TV sitcoms, like the current hit series “Black-ish,” and as a host of various music awards shows.  Diana is also mother-in-law to former ‘00s pop star Ashlee Simpson through her son Evan.

Next came Patti LaBelle, born May 24 in Philadelphia, Pa. under the sign of Gemini.   Patti first hit big as the leader of the 1960s group the Blue Belles.  Under the name LaBelle, the group continued to chart into the 1970s until Patti left in 1977 to begin her solo career.

One of Philly’s greatest musical exports and perhaps true to her roots, Patti is known for her down-to-earth personality and larger-than-life showmanship onstage, with antics only she could pull off with authenticity.  She is one of few artists who can legitimately begin a song with a soft purr and then turn it up to a full-blown wail by the time it’s over.

Fast fact:  Her first No. 1, “Lady Marmalade” (with LaBelle), is one of only a handful of songs to be No. 1 by two different artists.  The other version (by Christina Aguilera, Lil Kim, Pink & Mia) hit the top in 2001.  No other song since then has repeated at No. 1 by a different artist.

Guilty Pleasures:  Patti became somewhat of a disco/funk queen in the mid-1970s with tunes like “What Can I Do For You” and “Joy To Have Your Love,” two of this writer’s personal favorites.  She later displayed her versatility on the gospel-tinged “You Are My Friend” and again four years later when she teamed up with jazz great Grover Washington, Jr. on her first Grammy nominated performance, “The Best Is Yet To Come.”

Patti later returned to her soul music roots on her first No. 1 solo hit “If Only You Knew,” followed by her take on relationship’s trilogy of emotions with the hit “Love, Need and Want You” in 1984, both recorded for the famous Philadelphia International record label.

Biggest Hits:  In addition to “Lady Marmalade,” Patti hit No. 1 with “On My Own” – her duet with Michael McDonald on MCA Records in 1986.  It remains her biggest chart hit, having spent three weeks at No. 1 pop and selling over a million copies in a year when very few singles did so.

Most memorable moment:  In addition to her immense musical career, Patti has also been known for her famous cooking.  Her most recent claim to fame was via a viral internet sensation in 2015 when an unknown aspirant featured her sweet potato pie in a homemade video.  The video went viral and so did her pies, which at one point were reportedly selling at the rate of one pie every second at Walmart stores nationwide.

What she’s doing now:  Like the others, Patti still performs and is in the middle of a 2019 concert tour with eleven more dates scheduled between now and June.  The shows have received very positive reviews and other dates may be added.

Patti considers herself lucky to be alive after losing most of her family members at young ages due to a family history of cancer and diabetes.  She once predicted she wouldn’t make it to 50 given her genetic makeup.  With 75 now looming, Patti has certainly defied the odds and the music world is fortunate to still have her.

I can never really tell you the way I do it every time, because I never do it the same way every time.”

Last but not least was Gladys Knight, known as the Empress of Soul, born May 28 in Atlanta, Ga, also under the sign of Gemini.  Knight led the family act The Pips for more than three decades before finally going solo in the late 1980s.  Only brother Merald “Bubba” Knight survives of the three original Pips.

Guilty Pleasure:  The entire Claudine soundtrack.  Runners-up: the underrated late Buddah hits “Part Time Love” and “Baby Don’t Change Your Mind.” “Save The Overtime (For Me)” was a welcome return to the top in 1983.

Biggest Hits:  Her biggest hit with the Pips was the Jim Weatherly-penned tune “Midnight Train To Georgia,” a No. 1 song on both the pop and soul charts in 1973.  Twelve years later, she teamed with Dionne Warwick, Elton John and Stevie Wonder on Dionne & Friends’ “That’s What Friends Are For,” a song that is technically her biggest by having spent more weeks at No. 1 (four) in early 1986.

Most (recent) memorable moment:  Bzzzzz.  We all now know that Gladys Knight was “Bee” in the first season of the highly popular reality TV competition “The Masked Singer,” which recently revealed its remaining celebrity identities in the season finale.

Many thought that Gladys should’ve won the competition (she came in third behind singer/rapper T-Pain and ‘70s heartthrob Donnie Osmond).  Regardless, it exposed Knight to a whole new generation of television viewers who likely had little clue about her legacy beforehand.

What she’s doing now:  Gladys also recently performed the National Anthem at this year’s Super Bowl, a decision for which she received some criticism.  She stood by her choice, pledging her love for her country and that she wanted to “give the anthem back its voice” after earlier NFL player protests (against racism) when the patriotic tune was played at games.

Knight has spoken about parlaying her recent high profile status into a new album and a continuation of her very successful 2018-19 solo concert tour.

Interesting trivia about the three women:

Happy 75th birthday to all three legends!  You are rare diamonds indeed!